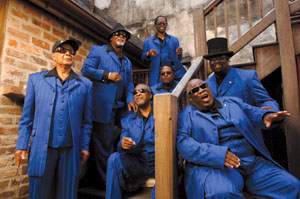 Being a road manager or business manager for a band that tours extensively means constantly corralling an ever-changing list of small and big details that are vitally important. Is the band being payed check or cash? Full payment up front, or part deposit and part payment upon completion of the show? Who collects the money? Is it more cost-efficient to fly or drive to the gig? How many hotel rooms are needed for the band and crew? Can the show’s caterer handle any special dietary needs for the musicians? Does the travel itinerary allow enough time for rest between shows?

Ricky McKinnie handles a lot of those tasks — and he’s blind.

“I have a computer and use a screen-reading system called Jaws,” says the drummer for the Blind Boys of Alabama. “And I have an assistant who helps out, too.”

For McKinnie and his bandmates, providing inspiration by example is their life’s calling. The Blind Boys of Alabama started toiling on the Southern gospel circuit in 1939 and for decades played every small church, tent revival and high school where they could spread their message. Then in the early ’80s, they were hired to star in the Obie Award-winning musical The Gospel of Colonus, and their phones started ringing off the hook.

“The Blind Boys are dreamers, and we’re just living out the dream,” says McKinnie. “The dream has been that nothing comes without hard work, and if you can dream the dream and do the work and keep the faith, everything’s going to be alright. All the doors we hoped would come open have opened, and we have let people know that a disability doesn’t have to be a handicap. A disability is nothing but a limitation, and we all have limitations.”

The Gospel of Colonus set the wheels in motion for an unprecedented run of success. In the last decade alone, the band has won four Grammy Awards, played nearly every prestigious national and international festival, and brought its message to rock and blues fans through collaborations with Peter Gabriel, Ben Harper, Billy Preston, Charlie Musselwhite and members of Los Lobos. And when it arrives in Lafayette Thursday night for a headline performance at Festival International, it’s writing another groundbreaking chapter in its musical history. It’s the first night of a tour with the Preservation Hall Jazz Band horns in support of The Blind Boys’ new collaboration CD Down in New Orleans — a project the band members undertook to renew New Orleans’s spirit after Hurricane Katrina.

“We thought of songs that might uplift the spirit of the people,” says McKinnie. “We couldn’t come down with hammer and nail to help restore the city, but we can sing songs that would lift up a bowed-down head.”

In addition to the Preservation Hall horns, Down in New Orleans features the Blind Boys singing alongside legendary Crescent City pianist Allen Toussaint and the Hot 8 Brass Band. Such pairings look like they might be incongruent on paper; Toussaint’s rolling New Orleans piano syncopation isn’t a traditional church-piano rhythm, for example. But the unspoken connections between the Blind Boys’ gospel and the second-line funeral sendoffs long played by New Orleans’ Dixieland and jazz community came through as soon as all the participants met in the recording studio.

“People need people,” says McKinnie. “They’re experts at what they do, and we’re experts in traditional gospel. Allen plays from the heart, and we sing from the soul. And heart and soul come together, and we were just like one.”

One track on Down in New Orleans follows a recent Blind Boys development — branching out from singing strictly sacred songs to include some secular material. That’s the case with their reading of New Orleans R&B maestro Earl King’s “Make a Better World.” “Every song carries a story,” says McKinnie. “If the story has a positive message and fits the need of the people of today, we try to tell the story and want it to be heard.”

After the hurricanes of 2005, the Blind Boys’ new versions of songs like “Down by the Riverside” and the Mahalia Jackson classics “If I Could Help Somebody” and “How I Got Over” take on new layers of meaning. And “Across the Bridge” evokes images of the notorious confrontation between police and evacuees on the Crescent City Connection. For McKinnie and his bandmates, their extensive Louisiana travels made hearing the events of Katrina a deeply personal experience.

“[Retired singer] Clarence [Fountain] still lives in Baton Rouge and had family and friends affected,” says McKinnie. “And going to New Orleans so many times throughout the years, we have lots of friends and connections there,” says McKinnie.

The band’s hopes for Down in New Orleans mirror its goals for its Lafayette appearance and the rest of the tour in support of the CD. “Just let the people know that if there’s anything in their life making them feel bad, they’re not going to leave our show feeling bad,” says McKinnie. “We’re going to jazz it up with Dixieland and take it home with some down home gospel.”

The Blind Boys of Alabama and the Preservation Hall Jazz Band play the Popeyes Scene International Stage on Thursday, April 24, at 8 p.m.