Neighborhood activists, Greyhound and Lafayette Consolidated Government continue to wrestle over a controversial 2007 zoning re-classification — and the threat of dueling lawsuits raises the stakes even higher. 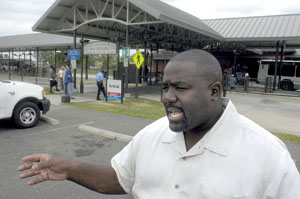 Councilman Kenneth Boudreaux doesn’t run into many people without a strong opinion on the future location of Lafayette’s Greyhound bus station. Many are adamant the station remain downtown; others have suggested the old Delchamps building on Willow Street. But Boudreaux’s constituents are nearly unanimous in their heated opposition to Greyhound setting up shop in the old IberiaBank building it purchased on the corner of Moss and Matthieu streets, across from the old Northgate Mall Cinema.

Since Greyhound announced its plans, a grassroots organization aided by several business and community leaders has distributed “Keep Greyhound downtown” yard signs and collected more than 1,500 signatures on a petition opposing the move. And if something isn’t done to prevent Greyhound’s move to Moss Street, neighborhood activists are threatening to take Lafayette Consolidated Government to court for inconsistent zoning that’s detrimental to the neighborhood.

“There will be a lawsuit filed on behalf of the citizens in the area and some businesses,” warns Karl Breaux, owner of Breaux’s Mart on Moss Street. “And I’ll gladly donate money to the cause.”

Breaux is hopeful that it doesn’t have to come to that. “I just think it would be a public relations nightmare for everyone involved,” he says. “For Greyhound, IberiaBank, for Lafayette city-parish government. People already have suspicious feelings. How did we get from having Greyhound in the downtown multi-modal center to here?”

That’s part of the backdrop to a renewed effort to bring Greyhound back into plans for an elusive downtown multi-modal facility, now called the Rosa Parks Transportation Center. Located adjacent to the Jefferson Street underpass, the center already serves as an Amtrak stop and a city bus terminal. Plans to complete the facility — and to include Greyhound and the U.S. Postal Service — have suffered repeated setbacks. Greyhound opted out of the original proposal in 2005 amid financial concerns; the company has since gone through bankruptcy troubles and a changeover in management.

City-Parish President Joey Durel recently contacted Greyhound about renewing talks to locate within the center. Greyhound spokesman Dustin Clark says that’s something the company is willing to consider. “We haven’t seen a proposal yet,” Clark says. “We’re waiting on it, and when we receive that we’ll seriously consider it.” Durel, Chief Administrative Officer Dee Stanley and Traffic and Transportation Director Tony Tramel were scheduled to meet this week to finalize details on a proposal for Greyhound.

Clark says Greyhound has stations in approximately 120 multi-modal facilities in other cities. “We like being in inter-modal facilities when they make sense for the company, because it’s really convenient for our customers,” he says. “They can easily connect to other modes of transportation there. But one thing that we have to look at is if it makes sense for the company.”

Clark contends that Greyhound originally backed out of plans to locate in Lafayette’s Rosa Parks Center based on local revenue projections. “There was never any sort of agreement that we were going to move into the multi-modal facility,” Clark says. “We did talk to the city about that, but we deemed that it wasn’t going to be cost effective.”

With any new proposal from the city, Clark says the cost of moving into the facility will once again be a major factor. Greyhound has already sunk $350,000 into purchasing the Moss Street property. (LCG has expressed interest in buying that property for a police substation.)

Another issue for Greyhound will be the time involved. In his recent letter to Greyhound requesting renewed talks, Durel wrote that it would likely be three years before the Rosa Parks Center facility would be complete and ready for Greyhound to move in.

“That’s if everything went perfect — and it rarely does,” says Tramel, emphasizing that bringing Greyhound back into plans will further complicate an already tangled situation. He says designs for the multi-modal center began about eight years ago, and the city has subsequently gone through tedious lease proposals with both Greyhound and the U.S. Postal Service. The project also involves a complex amalgam of revenue sources, including city-parish funds, Federal Transit Administration grant dollars with numerous stipulations and yet-to-be finalized tenant lease agreements. The city currently has approximately $9 million waiting in the bank to go to bid with the project. Last year, Tramel obtained what would be the remainder needed for the project — an $850,000 grant and a $2 million loan from the Lafayette Public Trust Finance Authority. The loan was to be paid back with future FTA grant money, but the city hasn’t finalized details on the loan agreement.

“This has got to be, in my opinion,” Tramel says, “one of the most complicated funding arrangements I have ever been involved with. I’ve got 10 years invested in this. And I’ve got files and hundreds of thousands of dollars worth of architectural fees involved to this point, and we don’t have a project yet, and I don’t have the funding to build it yet. There’s still 14 hoops to jump through.”

After Greyhound backed out in 2005, the city redesigned the project without the $1 million, 4,000-square-foot-space planned for the bus station. Those revised plans, Tramel estimates, are about 90 percent complete. Provided the LPTFA loan and Post Office lease are finalized, Tramel had hoped to go to bid with the project by the end of the year. “But that same goal has applied to the past three years,” he says.

Boudreaux has applied an added amount of pressure to the situation. He recently introduced an ordinance, which will come before the council on May 6, to repeal a zoning change granted by the previous council to allow Greyhound to operate out of its Moss Street building.

Last year, Greyhound purchased the Moss Street property from IberiaBank contingent upon the property being re-zoned. At its Oct. 23 meeting last year, the previous city-parish council went against the recommendations of both the Planning, Zoning and Codes staff and the Planning Commission and changed the property’s zoning classification from general business to light industrial.

“That property shouldn’t have been re-zoned,” says Councilman Bruce Conque, the only holdover from the previous council. Conque says he opposed the re-zoning at the time but was absent from the meeting where it was granted. Despite the uproar from residents, Conque isn’t currently inclined to reverse what’s already been done. “We took an action, and we have to live with it,” he says. “Greyhound acted in good faith based on that re-zoning.”

Many north side residents can’t fathom the logic behind Greyhound’s Moss Street location. Cornered on narrow residential roads, blocks away from two schools, and with limited city bus connectivity, it is hardly your typical bus depot location. “It’s a square peg in a round hole,” says Karl Breaux. “If I rode Greyhound coming from another city and they dropped me off there, I would say, ‘What the hell are these people thinking?’”

Crime in the area is another major concern. “It’s no doubt that there has been a high level of drug activity and other illegal activity in and around this area,” Boudreaux says. “Bringing the bus station there would further contribute to that. The hours of operation, the buses using residential streets ... it goes on and on. But safety’s certainly at the top of that list.”

Clark says Greyhound liked the property’s close access to I-10. “It’ll be easy for our customers to get in, it’s going to be accessible, and we thought it would be a good place to serve the community there,” he says.

Greyhound is now holding onto two properties in Lafayette. “We own the building that we’re currently in [on Lee Avenue], and we purchased the new property [on Moss Street] as well,” he says. “Right now our options are moving into the building that we purchased or working with the city when we get their proposal. We want what’s best for our customers and the community, but we also have to make sure it’s feasible for the company as well.”

Boudreaux is hoping that local government is able to find an agreement to keep Greyhound downtown. Undoing the zoning change is likely to have consequences. When the council brought up the Greyhound zoning issue at one of its meetings earlier this year, an attorney from Greyhound was on hand to let the council know that the company would consider filing suit against the city if it reversed its zoning.

“There’s an indication of liability on both sides,” Boudreaux says. “My motivation and my action is to try to side with what is right — and what was right was for that [zoning] not to have happened.”