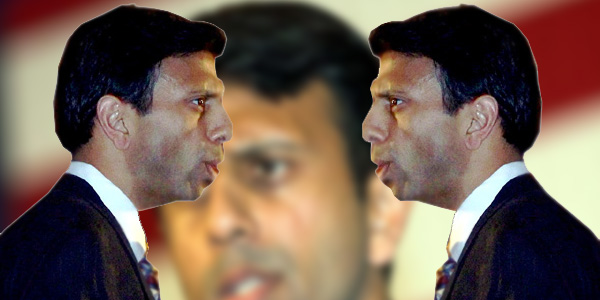 "I believe this pushes the envelope beyond breaking," Trevor Potter, the former chairman of the Federal Election Commission, tells me. Potter, who is perhaps best known for advising Stephen Colbert on the creation of the "Americans for a Better Tomorrow, Tomorrow" SuperPAC, was specifically referring to the incestuous relationships between Gov. Bobby Jindal's campaign, his non-profit organization and his supportive SuperPACs.

Gov. Jindal may be last in the polls, but, due to the unconventional ways in which his team has raised money for his campaign, using at least two closely affiliated Super PACs and another 501(c)(4), he is well within the top 10, including both Republican and Democratic candidates, in fundraising.

According to his most recently filed campaign finance report, Jindal's struggling presidential campaign has raised less than $600,000. But a pro-Jindal SuperPAC, Believe Again, claims to have more than $3.7 million in the bank, and a dark-money nonprofit affiliated with Jindal has at least $4 million more. All told, Jindal has actually raised more than $8.6 million, which, as veteran Democratic strategist Joe Trippi told The Advocate, "is more than enough to be competitive in the early states."

Jindal once campaigned to enact a "gold standard" of ethics reform in Louisiana, but today his presidential campaign appears to be blurring the lines in ways thought unimaginable before Citizens United. The official Jindal campaign, for all intents and purposes, is practically indistinguishable from the campaigns behind his SuperPAC, Believe Again, and his tax-exempt501(c)(4), America Next, and their shared staff, resources and missions make it very difficult, if not impossible, to believe the three organizations are not improperly coordinating with one another.

And that is not the only problem.

Others, including The New York Times and the Sunlight Foundation, have reported on Gov. Jindal's outsized reliance on PACs and the problematic relationship between his campaign and his non-profit organization, but thus far, no one has been able to prove collusion and illegal coordination.

Two companies, OnMessage and the Bautsch Group, are at the nexus of Team Jindal, and they're both led by former government staffers: Timmy Teepell, a partner in OnMessage, was Gov. Jindal's chief of staff and is now his presidential campaign manager, and Allee Bautsch, the founder and president of the Bautsch Group, served as then-Congressman Jindal's office manager and is now working for another former Jindal staffer, gubernatorial candidate Scott Angelle. Thus far, after repeated attempts, no one from OnMessage has been willing to speak on the record, and while Bautsch confirms she is working for Jindal's non-profit organization, she refuses to list her other Louisiana-based clients, referring this reporter, instead, to the state's ethics administration's online database.

In total, Teepell and his colleagues at OnMessage have made more than $4.1 million from the work they've done on Louisiana state campaigns, the vast majority of which, $3.8 million, was for Gov. Jindal. Bautsch and her company have made more than $1.5 million, including $917,000 from Gov. Jindal, $340,000 from the Louisiana Republican Party, $228,000 from candidate Angelle, and, most curiously, $32,500 from Louisiana Rising, a PAC supporting Angelle's campaign for governor. In addition to working for Gov. Jindal's non-profit organization, Bautsch is also working for his presidential campaign.

As I previously reported, Teepell, who is currently serving as Gov. Jindal's presidential campaign manager, appears to be collecting his paycheck from Jindal's state campaign fund, and it is likely that his company, OnMessage, is earning even more from the pro-Jindal SuperPAC, Believe Again.

On June 24, 2015, 50 minutes after Gov. Jindal announced, via Twitter, his candidacy for president of the United States, Graham Shafer, a partner at OnMessage, sent an e-mail to his entire firm titled, "Our Jindal Firewall Is Now In Full Effect," according to records exclusively obtained by The Independent.

"As of this morning," Shafer wrote, "the Bobby's (sic) campaign sent out a press release announcing his intentions. Our internal OMI (OnMessage, Inc.) fire wall (sic) is now in place. Here is a list of company employees and what side of the wall they are on." See: â€¨

"The legal conceit is that the rules concerning independence only apply after these people become legal candidates," writes Trevor Potter, "which I think is not a correct reading of the law."â€¨

Jindal was paying and apparently continues to pay, through his state campaign fund, between $15,000 and $30,000 a month to a political consulting firm founded by the co-writer of his memoir, Curt Anderson, and led, in part,by Teepell, his former chief of staff and current campaign manager. And we are somehow supposed to believe that the fiction of a self-imposed firewall, which is required by Federal Election Commission regulations on "shared vendors," is enough to disprove coordination.

This, for example, is the video that appears on the Believe Again SuperPAC's website.

It was filmed, entirely, at Jindal's announcement speech in Kenner; it features campaign logos and paraphernalia, and it's virtually indistinguishable from an official campaign ad. Even if the ad does not provide the smoking gun needed to establish coordination between OnMessage employees working in neighboring cubicles in their Alexandria, Va., offices, it nonetheless should be considered an illegal campaign contribution, for the same reason a Rick Perry-affiliated SuperPAC is under fire. Quoting from the National Journal (boldmine):

A new ad from the super PAC supporting Rick Perry may amount to an illegally sized campaign contribution because it prominently features official signs and paraphernalia from the Perry campaign.

The 30-second spot, which began airing in Iowa earlier this week, was paid for by the Opportunity and Freedom PAC, which is led by former Perry chiefs of staff Ray Sullivan and Mike Toomey.

The ad features footage from Perry’s announcement speech, including a podium decorated with an official Perry campaign logo, a plane emblazoned with the campaign’s insignia, and images of the crowd waving official Perry presidential signs.

Similarly, Bautsch's work for Scott Angelle's campaign and his political action committee should raise significant concerns. According to a source intimately familiar with both campaigns, who requested anonymity for fear of reprisal, Bautsch essentially provided Angelle's campaign with Gov. Jindal's entire campaign database and, at least initially, utilized the Jindal campaign's $1,200 a month software system to track donations and finances. Bautsch adamantly denies the accusations, suggesting that the individual campaigns are responsible for those costs and that Jindal and Angelle have never shared the same software.

Why does any of this matter?â€¨

For one, it makes a mockery of the law. â€¨â€¨"I would simply say that he [Jindal] talks a good game while doing all he can to circumvent the very rules he wants enforced on others," former Gov. Edwin Edwards says. "Anyway, whether he abides by or bypasses the rules that others live by, he is still at the bottom of the list. And while he can only go up, he will not move at all." â€¨

Gov. Jindal may never be able to move up in the polls, as Edwards suggests, but, at the very least, his nascent presidential campaign should offer a cautionary tale about the egregious loopholes in America's campaign finance laws and the ways in which one man believed he could manufacture credibility and a movement by having a small group of his friends set up multiple, redundant organizations.â€¨

But secondly, and more important, Americans deserve and demand an open, honest and transparent democracy. We deserve and demand candidates who will live by the spirit of the law, the kind of candidate Bobby Jindal once promised to be, nearly eight years ago, during his first campaign for governor.â€¨

Jeremy Alford, the publisher of LaPolitics and a contributor to The New York Times, recognizes the larger context. If the allegations are true, he says, "[Jindal] has moved further away, further than ever before, from the only shining moment of his term as governor: his 2008 effort to make money in politics more transparent. While the push to force lawmakers and statewide elected officials to disclose their sources of income was peppered with incomplete initiatives and loopholes, Jindal is tarnishing what could be the only legacy trophy on his shelf."

It is impossible to overlook the irony. â€¨

The governor, Alford notes, would "become exactly what he railed against seven short years ago."â€¨

[Editor's Note: The story has been updated to clarify that LaPolitics Publisher Jeremy Alford's comments apply to Jindal only if the allegations about the governor's campaign finances are true.]