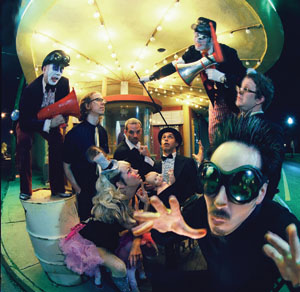 The New Orleans Bingo! Show has come a long way from its days as the boys (and girls) in the back room.

With six years of relative mayhem under its belt, the band-cum-interactive spectacle is now well on its way to a solid place in the pantheon of beloved New Orleans oddities. In late 2001, though, the act was just a twinkle in Lafayette native and ringleader Clint Maedgen’s eye, when he happened on a cache of 500 vintage bingo cards for $25 at a local junk shop. The purchase, paired with his recent acquisition of a pump organ, galvanized an already-forming plan to branch out from his megaphone-driven art-noise band Liquidrone and put together something different. Maedgen and a crew of costumed revelers and troublemakers had gained a cult following for their Thursday night shows in the rear dining room of Fiorella’s Café on lower Decatur Street, serving up original short films, the curious sounds of homemade instruments and theatrical antics alongside the fried chicken and mac and cheese.

Fast-forward to 2008, and the Bingo! Show has a pair of new albums, gigs at Festival International and the New Orleans Jazz & Heritage Festival, and a theatrical residency at New Orleans’ cabaret theatre space, Le Chat Noir. And thanks to an unlikely artistic partnership with traditional jazz stalwarts Preservation Hall, the ever-inventive gang of clownish miscreants has been taking the Bingo! Show on the road.

The pairing makes more sense than is immediately apparent. A New Orleans resident since 1992, Maedgen — who, like most of Bingo!, plays multiple instruments during the course of the show — studied clarinet at Southern University with the late Alvin Batiste. That experience along with more than 15 years absorbing the life and sounds of New Orleans and the memories of his grandparents’ old jazz records gave the experimental rocker a solid appreciation for traditional sounds. The partnership began when Preservation Hall’s creative director, Ben Jaffe, caught the show one night at Fiorella’s.

“Ben Jaffe with the Preservation Hall Jazz Band has put us in some incredible situations over the past three years,” Maedgen acknowledges. “To the point where we really honestly don’t know what’s going to be next.” He rattles off a list of accomplishments that the association has wrought — from sitting in with Allen Toussaint to playing the White House to meeting Tom Waits at a post-Katrina benefit gig in New York City. The band also shared a tent with the Preservation Hall Band at the sprawling Bonnaroo Music Festival last summer, alternating shows several times a day. “At this point, he could say, we’re booked for an exclusive three-week gig on Neptune, we’re gonna have to get you to do this series of tests.” The world took note of the partnership early this year when Maedgen, backed by the Preservation Hall Hot 4, sang the national anthem to open the BCS title game between the LSU Tigers and the Ohio State Buckeyes.

“We walk a fine line with that,” says Maedgen, of insinuating the Bingo! aesthetic into a Preservation Hall show. “We’re very, very, very — let’s go ahead and do four of them, very — respectful of that institution that is traditional New Orleans jazz. We don’t spend a whole lot of time onstage when the guys are doing ‘St. Louis Blues’ or ‘Bourbon St. Parade.’” He and the band perform skits between songs, or as the audience files in and out of the show, or during the end-of-show second line. They also show the music video for Bingo!’s song “Complicated Life,” which features a cameo from the Preservation Hall band, ordering food from Maedgen at Fiorella’s before he leads a carnivalesque bicycle parade into the streets of the French Quarter. This past Valentine’s Day, Ron Rona directed a video that featured Maedgen and the Hall band performing “I Can’t Give You Anything But Love” that was released as a free video Valentine via the Preservation Hall Web site.

Maedgen’s songwriting, with influences that range from John Lurie to Prince, has always been the act’s core. But Bingo!’s stage show and supporting cast are powerful, and these days, the group tries to play venues that complement that aspect. Mr. The Turk sweeps pot lids used for percussion during the song “Lookin’ For That Lucky Five” offstage with a push broom; Casey McAllister, a multi-instrumentalist during the show, dons white gloves for a dramatic, spot-lit theremin solo. The character VeVeLeRoux, a redhead with a dramatically corseted waist, pantomimes to the aching ballad “Something In Her Shows,” a tender and wistful song about love in a French Quarter strip club.

The group recently got another ringing endorsement, this time from Stephen Rehage — the producer of the Voodoo Music Experience — when he asked Bingo! to curate its own stage for the New Orleans festival in October 2007. The band gleefully loaded its roster with representatives from downtown New Orleans’ bohemian underbelly, including aerial acrobats and a moving tribute to Ernie K-Doe.

“What we’re looking to cultivate now is more of a theatrical run,” Maedgen says. “We feel like our show is best received on a three to five to 12-night run. We’re not a band in a van… we’re not a bar band. We’re not really in the business of selling liquor. It’s more of a show. I think [the New Orleans Contemporary Arts Center] has been the greatest opportunity for us — I mean, we had 88 different light cues, as opposed to a lighting configuration that’s on, off, or a spot. The thing that comes to mind is the movie Ray, that scene where he’s trying to do his country music, and the audience just won’t pay attention. And then someone had the presence of mind to put a light on him, and they just shut up and let him put that song across.” And in the end — bells and whistles aside — that’s what the Bingo! Show is trying to do.