The man behind Superbad and Knocked Up turns out more riotous comedy with Forgetting Sarah Marshall. 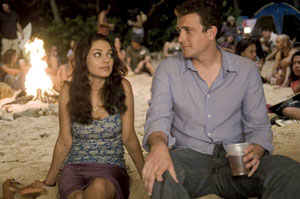 The Judd Apatow comedy train has gone off the rails a few times recently. After producing last year’s excellent Superbad and Knocked Up, he’s turned out mediocre fare like Walk Hard and the just-north-of-awful Drillbit Taylor.

Jason Segel, a hilarious bit player in Knocked Up, gets the limelight with Forgetting Sarah Marshall, a comedy that isn’t as consistent as some of Apatow’s classic efforts, but certainly belongs in a class among them. Thanks to a stellar comedic effort from Segel and a cast of Apatow regulars including Jonah Hill, Paul Rudd and Bill Hader, laughs are consistent, often original, and laced with nasty doses of reality.

Peter Bretter (Segel) likes life well enough. His girlfriend Sarah Marshall (Kristen Bell) is the hot star of a CSI-type TV show (co-starring Billy Baldwin!) while he does the soundtrack music for it. He lounges about the house, eating large basins of Fruit Loops, watching TV, and waiting for his love to come home. He breaks away on occasion to actually write music, including a Dracula musical (with puppets) that he hopes to make someday.

Sarah dumps Peter in a hilarious scene featuring a detailed study of male anatomy, and Peter is obliterated. He and brother Brian (the eternally funny Bill Hader) head out to the clubs, where Peter thinks casual sex might snap him out of his funk. That plan fails hilariously, and Peter sets his sights on a system-flushing happy trip to Hawaii.

Small problem with the system-flushing happy trip: Sarah is staying at the same resort Peter has chosen, and she’s there with her new beau, British pop star Aldous Snow (a scene-stealing Russell Brand). Peter must deal with his grief with the main catalyst for his sorrow practically next door.

It’s a nightmare, and first time director Nicholas Stoller has a deft touch with comedy of the uncomfortable. Segel, who also wrote the movie, has come up with scene after scene of horrific breakup situations. What makes them so funny and real is that every one of the characters has major flaws, but they also have endearing qualities. Rather than concocting something where Sarah and Aldous are hateful and repugnant, Bell and Brand are given the chance to make them somewhat sympathetic and, in the case of Aldous, blissfully outrageous.

Poking fun at her own television stardom, this film should help establish Bell as a legitimate movie star. This character has bitch written all over it, yet Bell makes Sarah somebody you can relate to, a person that has made some mistakes and doesn’t enjoy the collateral damage those mistakes have caused. She’s also pretty damn good with the funny stuff, making you almost want to forgive her for the wretched Pulse.

As Peter’s new love interest, resort employee Rachel (Mila Kunis, formerly of That ’70s Show) proves she has some comedic chops as well. She portrays Rachel as a laid back sort who can flip her psycho switch when necessary. Kunis has never been particularly impressive in the past, but she’s great in this movie.

Hill, Rudd and Hader are their usual reliable selves. Hill is especially good as a resort worker who has a serious man-crush on Aldous Snow, giving him demo CDs and trying to touch his face. Rudd has little screen time, but he’s funny as a forgetful surf instructor who likes weed. Hader is simply one of the great new comedic faces on the scene today. And keep an eye on Brand, whose lampooning of pop stars is some of the best rock boy spoofing since This is Spinal Tap.

All said, this is Segel’s movie; he can currently be seen on TV’s How I Met Your Mother. Apatow has done a nice job giving the likes of Segel and Seth Rogen (both Freaks and Geeks alumni) great roles to chew on. Segel is reportedly writing the next Muppet movie — and given what he does here with a Dracula puppet, that could be good news.