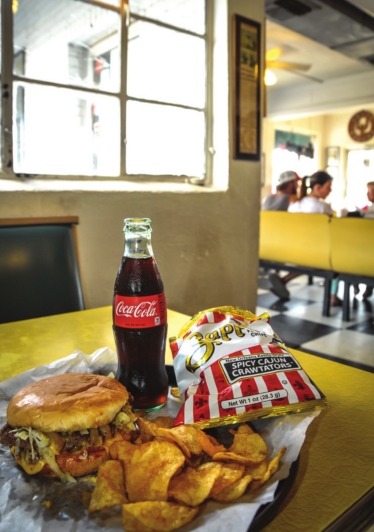 Looking over a double cheese burger at a beautiful woman is a vision of paradise. After two days attending pressers concerning what mankind does poorly, criminal and racial justice, two well-seasoned patties on a bun dissolved by radioactive cheese and special sauce is a panacea. Nostalgia is one thing; I’ve eaten at Judice Inn my entire life. But that nostalgia is less about the smell of raw onion hanging in the air and more about the restorative role the Judice Inn grease balm has played in my life. It was my post-soccer protein bar. My hangover sedative. And now it’s my workaday stress relief.

I’ll recount that I once took a distant cousin of mine there many years ago. This Mader of Kansas, who had never before been to Lafayette nor ever met me, began what I took to be his typical burger order. Medium rare. Tomatoes. No onion. Avocado. Pickles on the side. That sort of thing. The surly Judice Inn waiter cut him off. “Dude, just say hamburger or cheeseburger.” There’s a real comfort in a restaurant so confident in its product that it trades in either/or propositions.

Pro Tip: In Lafayette there are two types of people: those who love Judice Inn, and those who should move.