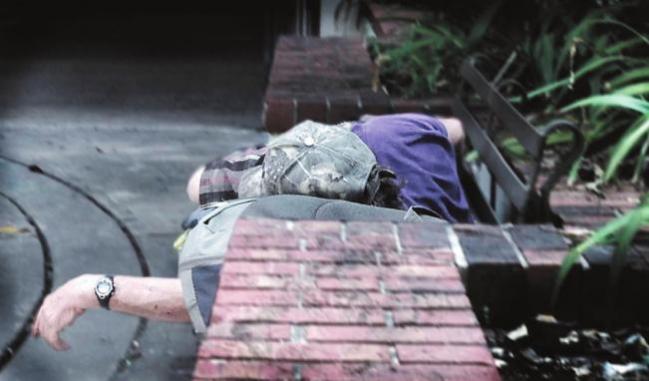 “Donny” is a fairly typical homeless man in Downtown Lafayette. Middle aged and scraggly, he hangs out in the small pocket park on the 500 block of Jefferson Street by day and sleeps in an undisclosed location by night.

He’s generally convivial, talkative to annoyance sometimes, and generally needs “just a couple of bucks” to pick up something from the dollar menu at Burger King down the street. He seems to have some chemical dependency issues, but has no apparent mental or physical maladies. He’s been a presence along Jefferson Street for more than a year.

But that might soon change thanks to a cooperative effort involving Downtown property owners, the sheriff and police departments, the Downtown Development Authority and Catholic Services of Acadiana, which is serving as the point agency in an effort to rehouse the Central Business District’s homeless population and to address vagrancy in the area.

“We noticed the problem a year ago, and that’s when we started meetings and we learned that a lot of the homeless were coming Downtown to sleep at night because they felt safer here,” says Nathan Norris, executive director of the DDA.

Norris says Police Chief Jim Craft agreed to budget extra money for the coming fiscal year, which begins Nov. 1, to pay a part-time person who will serve as a Downtown outreach coordinator. That person will technically be under the employ of Catholic Services, which already operates St. Joseph Diner and other services for the poor and homeless in Acadiana. In advance of attempting to rehouse them and aid with job opportunities, the outreach coordinator will conduct a census of Downtown’s homeless population and get to know them to understand the issues driving their situation.

“It starts with outreach — knowing who they are, assessing them, engaging them in a relationship,” Norris adds.

But there remains a gap in getting the homeless into homes, which is a lengthy process. So what to do with them in the interim? Norris says Sheriff Mike Neustrom took the lead on securing a location near Downtown for a so-called “low-barrier facility” to offer the homeless safe shelter at night — an alternative to jail.

“As you know, we spend a huge amount of money on our jail on people who have misdemeanors ... especially homeless folks who sometimes have medical conditions,” Norris says, adding that most traditional homeless shelters don’t allow someone in who is intoxicated. The low-barrier facility will, hence its name; it won’t allow people to drink while there, but they can check in drunk.

The sheriff’s office will provide security for the facility, Lafayette Police officers will provide transportation, and Catholic Services will staff it. Downtown merchants will cover the lease.

“There are several advantages to a lowbarrier facility,” Norris notes. “One is it allows them to gather more information about [guests] more quickly, especially if they come from out of town. The other thing is it will increase the chances the homeless will be getting a good night’s sleep; that’s actually pretty important as part of good daytime behavior.”