Rêve Coffee Roasters’ new space on Jefferson Street is positively glowing, even considering it’s overcast as I’m touring it. Thanks to a pair of skylights and ample window space, a wash of sunlight mutes the cracks and scars scattered about the white brick wall that runs along the left side of the room when facing the horseshoe coffee bar. White is pretty much everywhere, which gives the space a gallery vibe like the handsome and hip coffee bars and beaneries in Brooklyn and Manhattan that were Nathanael Johnson and co.’s inspiration. It’s sharp, elegant and minimalist. Empty, the space calls little attention to itself, though it’s not exactly spartan either. It’s a series of inviting lines and modernity that draw your eye to the building’s show piece seated at center frame above the picturesque vision from the front door: the roaster.

The roaster is Rêve’s relocation teleology, both its origin and its purpose. With a growing number of wholesale clients, Rêve’s roaster at its old location inside of BiBi’s Patisserie on Pinhook Road is roaring around the clock to keep up with an output of 150 pounds per day. To avoid burning up the machine and the beans, roasting is done in batches separated by long periods of cool down, forcing roasters to work long hours. Rêve’s new roaster inside the Jefferson Street location produces four times that capacity, a potential Rêve will meet in the not too distant future. In the near term, however, the additional capacity improves quality control and saves generous amounts of time.

When you walk in, you’ll hear this thing purring, smell its warm and earthy perfume and see its Jetsonesque space-age contours. The room’s concept is open and didactic, a mash-up of museum and laboratory with a classroom finish. Bags of single-origin beans will lounge at the building’s rear, cupping rooms sit behind enormous sliding gates, and sleek hi-top bars will line plate glass windows at the shop’s front. None of Rêve’s process will be obscured. Coffee making in all its obsessive detail will be on celebrated display. They say you don’t want to see sausage get made, not so with coffee. You’ll want to see every last second of it.

Barista Mark Whitney shows me around with palpable enthusiasm. The spot’s been a long time coming, mired by some construction delays and the typical growing pains associated with moving. The need to leave BiBi’s and operate their own, larger space had become imminent but the opportunity to move to the storefront on Jefferson Street, owned by architect and Johnson's Boucaniere chief Greg Walls, was a welcome serendipity. Rêve’s arrival, alongside the recent debuts of Lagniappe Records and Genterie Supply Company’s gorgeous storefront, continues a trend toward a vibrant and progressive north end of Jefferson Street. Whitney remarks that participating in that revitalization was a major part of the attraction.

“We’re excited because we see the potential of everyone else coming in [to Downtown] as well. We think that between Lagniappe and us and Genterie that we can kind of be the spearhead to regrowing this part of Downtown,” says Whitney.

While roasting is the heart of Rêve’s business, the new spot will trade BiBi’s coziness for professional-grade stretch room. The expansive salon, also designed and remodeled by Walls , will seat more customers in a more urban climate. Accompanying the expanded and modernized space will be an expansive and modernized menu of services. The retail and coffee portion will boast a nitro iced coffee machine that produces cold joe with a cappuccino-like frothy head, pastries, a tap system for beer (quite possibly house-made in the not-too-distant future), specialty cocktails and, of course, their going range of espresso and coffee beverages. Long term, the facility will serve as a hub for all kinds of non-coffee and non-Rêve delights, beginning with shared space for Tony Bonomolo’s Le Canne smoked sugar products. But Whitney sees those side projects as incidental to Rêve’s core mission: making couture-quality coffee.

“We want to be a coffee shop that happens to do other things and not the other way around,” Whitney says. “Our focus will always be coffee, no matter what else. We will always, 100 percent, focus on great coffee.” 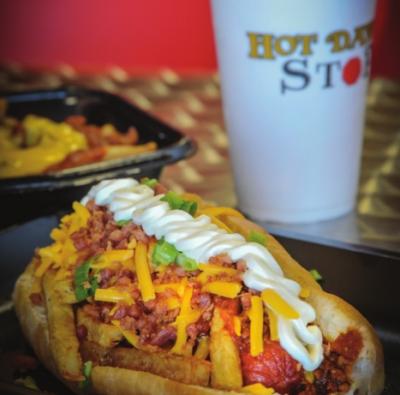 As beings, hot dogs are essentially meaningless. A hot dog than which no greater can be conceived is the only ontological concept that is a shut door. No matter how good a hot dog gets, it remains a hot dog. Superlatives really don’t apply. Of course, that is only the case if you conceive of a “hot dog” as the red encased pseudosausage that typically inhabits the “hot dog bun.” Expand your mind to include the notion that a hot dog is itself the sublime unity of wiener plus bun plus whateverthehelltoppingsyouwant, and you will know that a hot dog than which no greater can be conceived is not only an ontological possibility, but a reality in toto, repeated in millions of permutations. One such permutation can be found at the Hot Dawg Stop in Youngsville, a city at the edge of the actual world and in the realm of the potential. There, Hot Dogness is in full effect. The sort of place where smoky and tomatoey chili can be had by the ladle-full, regardless of vessel, be it house-made chips, house-cut fries or the platonic, allbeef frankfurter. It’s sensible that the wiener is German in origin. True philosophy can only be done in German. (Side note: Hot Dawg Stop does feature other tube meats: Italian sausage, andouille, crawfish boudin and baconwrapped turkey dogs. Although I stand by my assertion that the hot dog is fundamentally German regardless of the ethnicity of the wiener.)

Pro Tip: If Hegel viewed history as the gradual revelation of freedom, then he would applaud your culturally advanced decision to dip your Hot Dawg Stop fries in one of their chocolate malt milkshakes. The culinary dialectic is salt against sweet, the collision of which synthesizes a divine union of sensation laymen know as the “salty chocolate effect.” 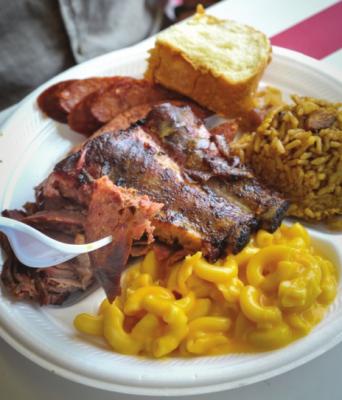 There’s a nihilistic resignation in eating ribs at 3:30 in the afternoon on a Monday. As soon as you’ve moved your will toward the door you’ve accepted that, regardless of what your plans are, productivity will cease and life will have no meaning. You might as well push a boulder full of barbecue sauce up a hill for eternity, only to have it crush you on its way back down the hill. The paradox here is that good barbecue will make you feel as though time stops in a collision of smoke and sweet and tenderness and yields momentary purpose in your life. Good barbecue simultaneously trivializes life and makes it more profound. Given that pontification, know that Lil Daddy’s Real Pit BBQ, attached to an On The Run gas station at the corner of Pinhook Road and NW Evangeline Thruway, is good barbecue. It makes time stand still and infects you with an itis that can only be described as the good kind of regret. Don’t bother with the sides. Get more brisket. Seriously. Stop asking for the mac and cheese, right now. You’re only gonna wish you had another rib or another link of sausage, and the mac and cheese is taking up valuable, purpose-giving space.

Pro Tip: Get the sauce on the side. It’s the thick, corn-syrupy KC masterpiece type of affair that you want for dipping, but don’t necessarily want on your fingers. There’s plenty of juiciness on the meats to get you by. As a bonus you get a plastic portion cup in which, if you’re like me, you can fit your entire faith in humanity. 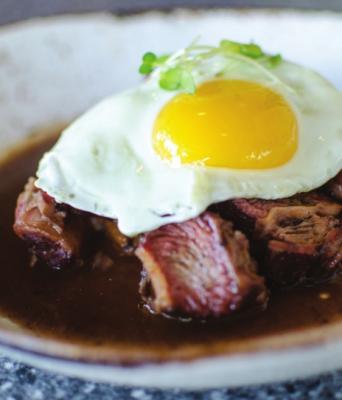 Darkness at the edge of roux

Brunch is an essential agent in the imperial rot of America’s decline. Somewhere in dystopia toils the next great world superpower, eschewing any such dalliances as the luxurious combination of breakfast and lunch, yet we turn a blind eye to our slow destruction and pour hollandaise onto our gorged and gluttonous bellies. That we can wake up so late and yet be fed so well is a testament to our bygone and waning power. Embrace your decadence, America. Stop worrying and love the gut bomb.

While the world’s problems remain unsolved, help yourself to Dark Roux’s farm-raised short ribs, succulent and effortlessly seasoned, and order a side of biscuits. Both white cream gravy and biscuit are perfectly floured in that home-comforting, Southern-fried-but-not-fried kind of way. The wholesomeness of the dish belies its progressive, farm-to-table edge, allowing you to indulge while continuing to fool yourself into thinking you’re really making a difference in the world. Stuffing yourself has never felt this good, both ethically and physiologically. By meal’s end, you will look with longing at the emptiness of your plate and see the emptiness of your soul staring back at you. Take comfort in the exquisite execution of its beignets, at sight rustic and doughy, at taste airy and sweetly disintegrating, like the vestiges of our nation’s greatness.