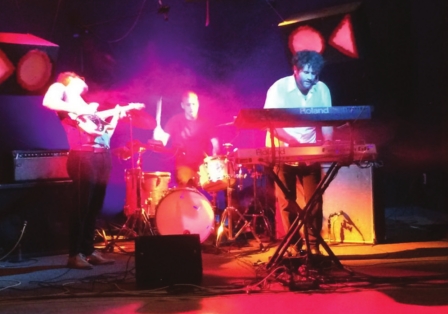 Three Days in Another World

The name of J Burton’s new project, Talker, is about as mundane as it gets. Yet, as the name of the record suggests, this is a vast departure from his previous work as front man of Dire Wood and FIGHTs. Teamed with FIGHTS member Brycen Gaddis and Ian Guidroz (of Brother Dege), the record is many things but mundane. At first listen, Burton’s vocals just don’t fit with the synth and bass guitar-only compositions. Not that Burton’s progressive alt-roots style got lost in the many electronic moving parts and groove-based rhythms — it just didn’t feel right after a decade of hearing his voice in other ways. But, after the initial out of place shock wears off, it starts to gel. Otherworldly, the record thumps along with the trio delivering a mix of old school vibe, synths and grooves. Dubbed dark disco as a genre, it is more of A dancedriven take on Talking Heads’ “Life During Wartime,” minus the socio political messages. By the end of its long weekend, Three Days in Another World has warped genres and moods, but remains consistently enjoyable, fresh and interesting. 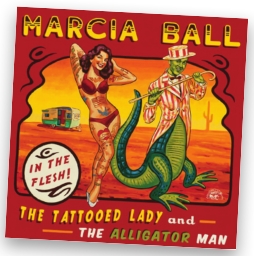 The Tattooed Lady And The Alligator Man

The name Marcia Ball evokes images of a by-gone Lafayette — a time when Grant Street Dancehall was still kicking, live music was a prime focus, going out meant jeans and a T-shirt and you could see acts that deserved their own Hatch Show Print for cheap. The crowds dress up to a new level now. Live music is no longer a focus. Ball however is the same. On her new release, she’s showing no signs of age — well, that voice is still that voice — and isn’t looking to indie up or roots rock out her music; she’s still at her piano fusing New Orleans junker with Texas roadhouse sounds. Here, she parties like it was a decade and change ago. Cuts such as “Like There’s no Tomorrow” stay close to what she does best — move a crowd — as does “The Squeeze is On,” which defies expectations and pumps zydeco accordion and some occasional NOLA drum beats into her piano and bluesy lyrics. Her “The Last to Know,” is so old school, so Irma Thomas, so Crescent City, it calls for checking the liner notes to see if it is some long lost gem. Though a solid Ball disc, there are a few near missteps: The title cut almost seems bound for the tourist shops of the Quarter but has a great hook; “Hot Springs” is a little too my-baby-gave-me-the-blues. Overall, Ball is sticking to what she’s knows and is good at — pairing her piano passions to bring fresh blues and fill dance floors .