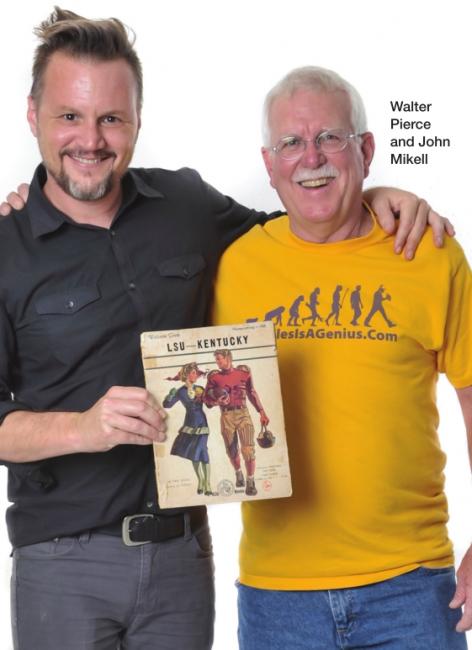 Few are the memorabilia from my dad’s alpha days, but he was one hell of a jock: all-state at Baton Rouge High in the ’60s in football and baseball. After playing football on scholarship at LSU, he took a turn at his other forte, baseball, and played a few years in the Los Angeles Dodgers farm system. But injuries nagged and children multiplied, so Spike left baseball for sales, working his way up through Maytag for more than two decades before walking away from a regional manager position in New Orleans and joining the exodus to the Northshore to start a coin-op laundry distributor in St. Tammany Parish — a successful company my siblings run today. He and mom moved into one of those gated golf neighborhoods where he swung a mean 9-iron.

Spike never became one of those washed-up athletes who couldn’t let go. He didn’t surround himself with his accolades, many though they were. There was no trophy case in any of the houses we occupied during my youth, although he accrued enough hardware during his athletic life to handsomely appoint a large cabinet. That just wasn’t his thing. I guess it was always about the next challenge — improving his tennis and golf games, besting the guys at bourré, filling a sack with dove on a chilly December hunt.

Spike’s one accommodation to ego was the LSU letterman sticker — the L Club — in the back window of his car, because playing football for Charlie McClendon was, I suppose, the apex of his athletic achievement.

There’s a green, wool blanket with “Cotton Bowl Classic” and a stylized boll embroidered on it in a cedar chest at my house. It was given to players on the winning team in that legendary game between undefeated and No. 2-ranked Arkansas and upstart LSU following the 1965 season. LSU, 8-3 and unranked, pulled off an epic upset, holding the offensive juggernaut Razorbacks to a single touchdown in a 14-7 win on Jan. 1, 1966, that many Tiger fans long in the tooth still consider LSU’s greatest win ever. Spike played in that game, and other than the blanket, I’ve owned virtually no mementos from his gridiron glory — until a couple of weeks ago when IND sports columnist John Mikell stopped by the office and dropped the biggest, best, most awesome and random Friday-afternoon surprise on my desk: a program from the LSU homecoming game on Oct. 16, 1965. The Tigers beat Kentucky 31-21. Spike is pictured in that program. So is Nelson Stokley, the pride of Crowley who would later coach the Ragin’ Cajuns to some of their most successful seasons before the Hud era including the greatest win in Cajuns history — that 1996 victory over 25th ranked Texas A&M at Cajun Field.

Coincidentally, the program was given to John, a lifelong, diehard Tiger fan, by Richard Baudouin, the late, longtime editor of The Times of Acadiana back when it was owned by Steve and Cherry Fisher May, my employers here at The Independent. So, the program that is now a treasure to me went from an editor employed by the Mays to John to an editor employed by the Mays. That’s kind of cool.

Spike Pierce died in 2007. In a way, that homecoming program made a homecoming of its own. I’m ready for some football. Check out this month's football special here if you’re ready, too.