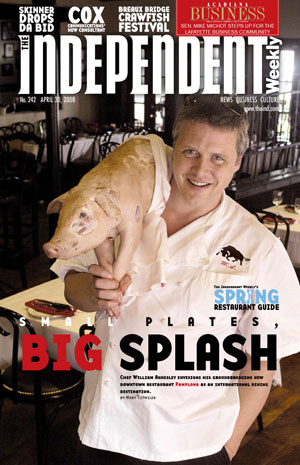 Ernest Hemingway went to Pamplona to see the running of the bulls and never got over his love affair with Spain. Diners who visit Lafayette’s new downtown tapas restaurant of the same name are having the same experience. At first it seems a bit confusing. You order how many dishes? You only get vegetables if you want them? You can have duck and shrimp and oysters and foie gras and scallops and a haunch of roast piglet? And then suddenly the small plates, carefully crafted with food as lovely to look at as it is to eat, start coming in a rush, and you find yourself racing through an explosion of taste, elbowing your companions to get the last of the escargot, signaling with both hands for another bottle of Spanish Cava sparkling wine, fiercely guarding a spoonful of chocolate lava cake. When it’s finally over, your relationship with food has been altered forever.

Diners conscious of health and waistlines or simply tired of huge platters of meat and potatoes have long been ad-libbing in traditional restaurants by ordering a series of appetizers instead of the heavier entree. The tapas approach to eating — an array of small portions of food with a high intensity of flavor — has swept through the restaurant world in the last five years. It’s the way we know how to eat in Asian places, and now chef William Annesley is encouraging Acadiana to eat like Spaniards, or better. The array of dishes with ingredients from all over the planet that Annesley gathers and lays out before dazzled diners has dramatically raised the culinary bar in Lafayette.

Chef Annesley was born with a silver spoon in his mouth. “I grew up in a castle, with butlers and footmen,” he says. Annesley is a descendant of the Earls of Annesley, members of the Irish peerage created in 1789; the family seat was Castlewellan in the County of Down. Annesley summered at another castle, New Abbey, in County Kildare, Ireland. His family unites two great houses of whiskey, the Scottish Haigs and the Irish Jamisons. “In Ireland, there was a massive full service kitchen, and I’d just love to sit in there and watch,” says Annesley. English food has a bad rap, but for those privileged enough to own country estates where everything is freshly grown, it’s quite a different story. “We had a 5-acre vegetable garden, wonderful produce, greenhouses, and all our meat was raised and slaughtered there,” he says. “And we had wonderful cooks — you get involved.” Traveling the continent, he ate in all the finest restaurants in Europe. Then the money ran out. “I still wanted to eat that way,” says Annesley, “so I started to cook.”

At 19, he got a job working at the Thatched Tavern, an eating pub in Ascot. Under Chef Bobby King, the posh pub had to be booked 10 days in advance. Two years later, for his 21st birthday, Annesley took off for a three-week vacation in America. “I blew every penny on the trip to California, and then I suddenly realized I didn’t have the money to move on. I had enough money to buy a motorcycle,” he says, laughing.  He got a job building movie sets in Los Angeles, quickly moving up to art director and movie producer. “All the time I was a bon vivant,” he says. “I kept having these dinner parties, legendary dinner parties. Then one day I decided I was fed up with the commercial video world, so I turned around and started charging for the dinners. I got a couple of name clients — the biggest was Bryan Lourd [of Creative Artists Agency].”

After preparing a Thanksgiving lunch for Lourd and his then-girlfriend Carrie Fisher, word spread fast. Annesley cooked for Keifer Sutherland and Gwen Stefani and generated a huge amount of buzz when he opened Tangier restaurant on Hollywood Boulevard. The eatery hosted pre-Oscars parties and was patronized by everybody from Gore Vidal to Leonardo DiCaprio. “It was a riot,” says Annesley. “That place nearly killed me.”

He went on to open another restaurant with a North African theme, Oasis, which garnered rave reviews from LA Weekly, Conde Nast Traveler, The Los Angeles Times, London Times and The New York Times. Meanwhile Annesley hooked up with director Quentin Tarantino’s assistant, Karina Carrero, in 1996. They married in 2003, and Tarantino gave away the bride.

A native of Venezuela, Carrero grew up in the Hub City, graduating from Lafayette High. Annesley had visited Lafayette several times, but after a trip south in 2004 the couple decided to put down roots in Cajun country. “I saw what was going on downtown,” he says. “At first I looked at a building across the street from Dwyer’s. But it was hard to get investors. Down here it didn’t matter that I’d been written up by The New York Times.” The old Chris’s Po-boys building was up for rent, and the second time was the charm. Pamplona, four years in the making, opened three months ago. 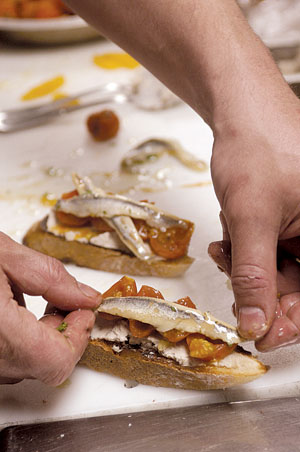 Annesley brings his world view of food to Lafayette’s tables. Indian curry spikes his chicken salad. Thai coconut milk sweetens mussel poaching broth. Hand made pastas bring a bit of Italy to the menu, and the chargrilled steak with a chimichurri sauce hails from Argentina. The menu could be described as fusion tapas. “Actually,” says Annesley, “it’s everything I like to eat.”

Take his Duck Fat Fries for example. French fries are ubiquitous and simple. But Annesley changed the grease the potatoes are fried in to duck fat, which he flies in from the Hudson Valley along with his fois gras and ducks, ensuring his fries are extra crispy, then ups the ante with a sprinkling of sea salt, fresh garlic and parsley. In a nice play on Annesley’s British fish-and-chips heritage, the fries are served in a spiral metal cone lined with a twist of paper. And they’re sensational.

The upper third of the menu offers traditional montadillos, the kind of small bites offered along with a glass of sherry or wine in bars all over Spain. There are olives, cheeses with quince, Serrano ham, baby eels with garlic and lemon on toast and small shrimp in oil and garlic — the Spanish equivalent of nuts and chips.

The next menu section is labeled simply tapas, but takes you from the shores of the Mediterranean with grilled fresh sardines, to the jungles of east Asia where Annesley learned how to make the saffron coconut broth he uses to poach his mussels. There are sauces one can only define as Moorish — a melding of Spanish and North African, like the rose petal dipping sauce that comes with the Pork Kababs. Annesley fuses quince paste, a Spanish standby usually served with Manchego cheese, with sherry, lemon, garlic, and salt and rose water, the fragrance of the Alhambra. He’s taken a friendly poke at a Cajun breakfast, offering Morcilla, a traditional Spanish black boudin, which he fries and then tops with a tiny perfect fried quail egg. The roasted beet salad with goat cheese defies everything you’ve ever thought about beets. These are like eating fresh rubies. Duck confit is an ingredient often used in the classic French bean dish, cassoulet. Here, Annesley serves the fork-tender preserved duck set off by fresh oranges, a nice play on texture as well as a nod to the classic paring of duck and orange.

“Lafayette is a tough place to convince people about new food,” Annesley says. He and Karina threw three weeks of dinner parties before the restaurant opened to let residents taste his tapas.

Dressed in restaurant whites that are usually smeared with a sampling of whatever he has been preparing, the 41-year-old chef gets loud, animated and joyous as he describes his vision. “What I like about Lafayette is that people understand quality,” he says. “They’re very opinionated about new food, but when they put something good in their mouths, they get it.”

Food of this caliber can be pricey. “Look at it this way,” Annesley says. “My meat comes from Chicago. Fois gras and ducks from New York. Cheeses, ham fly in from Spain. The fresh sardines come from Portugal.” And then there is the local gathering of all things good. Veal from Brookshire Farm in Abbeville. Shrimp from Delcambre or Intercoastal City. He goes to Gotreaux Family Farms for eggs, and tilapia and dairy products arrive from Smith Creamery in Baton Rouge. One member of the Pamplona staff’s sole task is to drive around buying local fare. “I’m paying double what I could pay if I was buying national brands, but quality is quality is quality,” Annesley reiterates.

It takes a great degree of skill to make food seem so effortless. Every dish is cooked to order in a kitchen dominated by European talent. Sous chef Sergio Izquerdo formerly cooked under Catalan superstar Ferran Adrià, owner of elBulli near Barcelona, and also worked under French three-star chef Alain Ducasse. Chef de cuisine Orlando Amaro comes to Pamplona after a stint at renowned restaurant Arzac in San Sebastian, Spain, and Santa Maria in Barcelona. The firepower in the kitchen combined with the highest quality seasonal food allows Annesley to serve such deceptively simple dishes. “I see Pamplona as a destination of the food circuit, a place that earns Michelin stars,” says Annesley. “I intend for this to be one of the great restaurants of the world.”