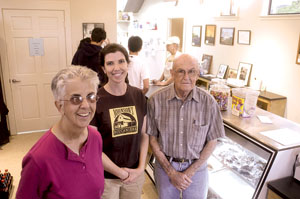 When Eunice icon Johnson’s Grocery closed in 2005, it was the end of an era for the family-run market which has a legitimate claim to being the first shop to sell boudin.

Arneastor Johnson opened his grocery in 1939 with a small ice-box for milk, which he updated to a refrigerated meat cooler right after World War II. He sold pork and beef locally ranched on the Cajun prairie and cured in the homemade smoke house behind the grocery — and started selling boudin, which at that time was solely a product of family boucheries. Arneastor’s four sons — Wallace, Steven, Matthew and Joe — grew up in the market and became experts in the prairie arts of smoked meat: pure pork sausage, pork sausage with garlic, “mixed” (pork and beef), mixed with garlic, beef sausage, turkey sausage and andouille, ponce (smoked, sausage-stuffed pig stomach,) tasso, bacon, ribs and beef jerky.

While the meat market at the back of the shop was a destination for those familiar with the quality of the Johnson family sausages, the grocery struggled, as mom-and-pop places do, and finally went under, unable to compete with the Wal-Martization of America.  “A lot of the customers we built on were friends,” Wallace Johnson told The Independent Weekly three years ago. “A lot of them passed away. Nothing lasts forever.”

Wallace’s daughter, Lori Walls, is making him eat his words. “I really missed the sausage,” she says, standing in the quirky aluminum-clad building at 1111 St. John St. that was built by her contractor husband, Greg Walls. Johnson’s Boucaniere (Acadian French for smokehouse), an homage to her father, opened a few weeks ago. Located right down the street from St. John’s Cathedral, Lori is smoking her own prairie-style sausages, tassos and jerky in the heart of downtown Lafayette. She worked on her recipes while her husband built the small shop. Her uncle Matthew helped with seasoning, and Wallace taught her how to stuff sausage. “When I make sausage at the house,” Lori says, “my dad’s there every time.”

The smokehouse at Johnson’s Boucaniere is a far cry from the small smoke shed behind Johnson’s Grocery. Up in Eunice, the smokehouse Arneastor Johnson built was a closet-sized cinder block affair. Wooden dowels smoked to a charred black from years of use were draped with ropes of sausage. Oak fires were lit in a little metal pan on the dirt floor, the door was sealed, and the meat smoked for hours. On a clear day with little humidity, the smoked meat came out deep, succulent red. Customers came for some sausage for their beans or sauce piquant and usually left with a link of Johnson’s signature boudin, a warm baked sweet potato from the basket near the register, and if they were lucky, a cup of the hand-dripped strong coffee the Johnson brothers drank in the morning.

Lori has tripled the size of the smoking operation here in Lafayette. Her smokehouse has four compartments, each with its own metal firebox and sealed with a shiny stainless steel door. But she’s still burning oak, as her family did. Up front, the floors and counters gleam with a modern sheen, but an old pie safe her great grandfather built to hold the family’s food in the days before refrigeration graces a corner. Another familiar sight is the grocery’s wooden vegetable bin, worn smooth by the daily touch of hundreds of hands, which holds another Louisiana tradition, Zapp’s chips, to go along with the daily offering.

Lori’s generation has had to learn a new business model in order to keep the old smokehouse traditions alive; she’s serving lunch. Sausage po-boys, pulled pork sandwiches and a daily plate lunch special are the newest addition to the downtown noontime scene. The red beans and rice — made with her own sausage, of course — are superb, and she’s planning a sausage and tasso sauce piquante po-boy. Fridays feature meatballs and spaghetti, made from her own fresh garlic sausage recipe.

Wallace Johnson is a modest man, and it’s hard to get him talking about himself. So when he praises his daughter, it means a lot. “I’m very proud of her,” he says.