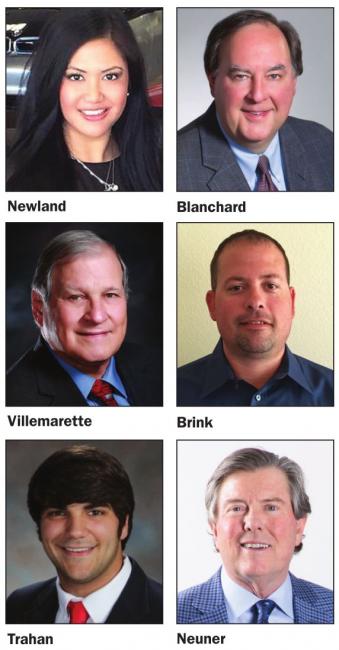 Moss BMW client advisor Michelle Newland received the BMW New Vehicle Client Advisor 2014 Profiles in Achievement Bronze Award, an incentive program that recognizes and rewards top performers in BMW centers. Michelle has been recognized by BMW of North America, the U.S. importer of BMW luxury/performance vehicles. Recipients of the award are ranked in weighted categories throughout the year and are required to attain high levels of customer service, as well as proactively promote and sell finance and insurance products. Additionally, financial service professionals must achieve high levels of penetration in designated sales and performance criteria. Requirements include a minimum of 10 new sold BMW vehicles per month, with only exceptional customer satisfaction survey scores. Newland has worked for Moss BMW for more than three years.

Quality Companies has earned the position of No. 3514 on the 2015 Inc. 5000 as ranked by Inc. magazine on its 34th annual Inc. 500|5000, an exclusive ranking of the nation’s fastest-growing private companies. The list represents the most comprehensive look at the most important segment of the economy — America’s independent entrepreneurs. Companies such as Yelp, Pandora, Timberland, Dell, Domino’s Pizza, LinkedIn, Zillow and many other well-known names gained early exposure as members of the Inc. 500|5000. This year Quality Companies ranked No. 18 ($123 million in 2014 revenues) on ABiz’s list of the Top 50 Private Companies in the region.

Kenneth Villemarette, board chairman of the Lafayette Schools Credit Union, has been inducted into the Louisiana Credit Union League Hall of Fame.

The Hall of Fame recognizes credit union professionals and volunteers who have shown superior leadership, commitment and dedication to further the credit union movement. Villemarette has volunteered at Lafayette Schools Credit Union for 24 years, serving as board chairman for 18 years, vice chairman and treasurer.

The board of directors of the Lafayette Education Foundation appointed Michael Blanchard executive director. He succeeds Becky DeJean, who has retired after five years as head of the organization. Blanchard brings 25 years of fund development and nonprofit management experience to LEF and an equally long record of experience as an educator. From 1990-1994, he served as executive director of the Volunteer Center of Lafayette.

From 1995 through July 2007, he held dual appointments as executive director of the Hospice Foundation of Acadiana and director of community education for Hospice of Acadiana. He returns to Lafayette after eight years as vice president of development for the Hospice of Wake County Foundation in Raleigh, N.C. Under his leadership, that foundation raised more than $32 million and successfully completed a capital campaign to build a 20-bed hospice home. From 1990-2007, Blanchard also served as a member of the adjunct faculty in the Department of English at USL and then ULL.

Francis X. Neuner of NeunerPate law firm was inducted into the International Academy of Trial Lawyers at its mid-year meeting held in July. The academy, which limits membership to 500 fellows from the U.S., seeks out, identifies, acknowledges and honors those who have achieved a career of excellence through demonstrated skill and ability in jury trials, trials before the court and appellate practice. Members are engaged in civil practice on both the plaintiffs’ and the defendants’ side of the courtroom, and the trial of criminal cases. The academy invites only lawyers who have attained the highest level of advocacy. A comprehensive screening process identifies the most distinguished members of the trial bar by means of both peer and judicial review.

A third generation Trahan family member has joined the management team at Trahan Construction. A McNeese State University graduate with a bachelor’s degree in business management as well as a bachelor’s degree in finance, Kade Trahan is focusing his efforts on business development/market expansion along the I-10 corridor. Kade has been working for the company part-time since 2008.

Terry Dugas has joined Russo as office manager at the company’s Lafayette office. Dugas comes to the firm with more than three years of sales and marketing experience in several different capacities and industries. In his last role as a marketing and advertising manager, Dugas maintained social media accounts, created custom promotional materials and coordinated public relations efforts. In his new role he will manage both the New Orleans and Lafayette offices out of the company’s Lafayette base. A native of Lafayette, Dugas has a degree in public relations from UL Lafayette.