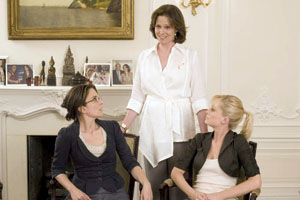 Whenever people star in their own American Express commercials, they’re not just selling credit cards but establishing themselves as products, too. Tina Fey’s recent AmEx spot provides a perfect showcase for her now-established comedic persona as a harried but capable TV show-runner and mom. The ad extends Fey’s brand as the on-camera star of her sitcom 30 Rock, which itself fictionalizes her roles as 30 Rock’s creator and, before that, Saturday Night Live’s first female head writer.

In the same way that Jerry Seinfeld can’t really play characters, but is a genius at playing Jerry Seinfeld, Fey has cultivated a likable version of herself for performance. Fey’s characters come across like a more frantic Mary Richards or a more flinty Ally McBeal. With her trademark glasses, Fey’s go-to character is defined more by her intelligence than many other funny female roles. But she may not be able to think her way out of the post-feminist dilemma: Can you really have it all — work, love and family — and even if you can, will your life become a discombobulating blur?

It’s easy to imagine Baby Mama’s surrogate pregnancy plot as a multiple-episode, sweeps-month arc on 30 Rock. It’s also painful to imagine, because the 30 Rock story would be snappy and insightful, whereas Baby Mama is leaden and obvious. Former Saturday Night Live writer Michael McCullers wrote and directed Baby Mama, and though he tailors the film to Fey’s gifts, he doesn’t live up to the standard that Fey clearly sets for herself.

Baby Mama begins with the alarm ringing on Kate’s biological clock. A young vice president for a Whole Foods-esque organic food chain called Round Earth, Kate announces her wish to have a baby. When she sees multiple infants at a “Mommy and Me” yoga class, she seems close to salivating. Kate turns to surrogacy after facing difficulties with adoption as a single mother and realizing that she’s unable to conceive. (“I don’t like your uterus,” says her OB-GYN.)

When Angie has a falling out with her sleazy boyfriend Carl (Dax Shepard), she moves in with Kate. A predictable, female take on The Odd Couple for the 21st century follows, as Kate’s health-conscious, anal-retentive yuppie clashes with Angie’s working-class junk-food junkie. At times the women seem to be kindred spirits, with the fertilization scene at the doctor’s office shot like a romantic rock video. Hearing some particularly touchy-feely instructions at a birthing class, Kate says, “I think she wants me to rub olive oil on your ...” “Couldn’t I just spray Pam down there?” Angie asks.

With her large, glaring eyes and shark-like smile, Poehler has a flair for playing insincere or scary women (and currently does a wicked Hillary Clinton on SNL). She’s particularly funny in Baby Mama when caught in outrageous lies, and offers deft physical comedy when she can’t figure out child-proof locks, or tries to steal other people’s drinks while clubbing with Kate.

But Baby Mama seems to have no sense of who Angie actually is or would be in real life. You get the feeling that actual blue-collar high school dropouts are unthinkably alien to the script. (Even a stereotypical trailer-park denizen like the regulars on My Name is Earl would at least give Poehler a specific character.) Baby Mama offers the role some perfunctory credibility by making Angie aspire to fashion school but avoids engaging potentially rewarding issues of female social roles.

Similarly, the script simply treats modern fertility trends as a laundry list of gags without considering the genuine emotions underneath them. A particularly mean, peculiar running gag involves Chaffee Bicknell conceiving a child “the old-fashioned way” in her 50s, and while Kate’s jealousy is understandable, her revulsion makes no sense. Kate’s romance with a juice-bar owner (Greg Kinnear) hits the rocks when, out of nowhere and out of character, he rants about surrogacy just to give the film a superfluous complication.

Individually, some of Baby Mama’s jokes inspire laughs, such as Angie’s attempts to use a prosthetic belly called a “He-tus.” When McCullers tries to bring the plot threads together at a strained farcical baby shower and then a legal hearing, Baby Mama becomes painful to watch, like seeing loved ones trapped on Fear Factor. Maybe Fey can have it all one day, but Baby Mama suggests that her potential movie career will need a longer gestation.