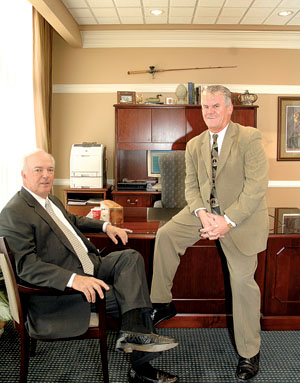 When businessman Mike Maraist joined the board of Home Bank in November 2004, he was ready to help take the conservative bank to a new level, much as he’s done numerous times with his own business ventures. Maraist’s business background is about as diverse as you’ll find in Acadiana — and across the state. Now he’s helping lead the charge of converting the 100-year-old federally-chartered mutual savings bank to a publicly traded stock institution.

As managing general partner of Le Triomphe Golf & Country Club, Maraist joined Home Bank’s board right after having spent more than $3 million to create a more challenging course for the Louisiana Open’s professional golfers. In addition to numerous real estate investments, a portfolio that continues to grow to this day, he also serves as owner/vice president of Timco Services, a 32-year-old oilfield service company. That’s just a snapshot of Maraist’s holdings; his friends and business associates says he’s confident in his dealings, always looking down the road for a new challenge. “He is an absolute optimist, he really is,” says attorney Jack Castle, who handles some of Maraist’s legal work.

But there’s strong sentiment tied to the Home Bank move, as it marked a return to Maraist’s early roots. The savvy entrepreneur has always had banking in his blood. At 24, Maraist served as president of Acadiana Bank in Eunice. His father was founder and chairman of Morgan City Bank, and was also president and chairman of St. Martin Bank & Trust. Maraist’s sister, Margaret Ritchey, currently serves as an executive at Whitney National Bank in Lafayette. “Mike was involved in banking during the worst of times and during the best of times in Louisiana, experience which serves him well,” says attorney Castle, who also is a longtime friend.

In 1978, Maraist got out of the banking business to concentrate on his investments. A few years later, Home Bank President and Chief Executive Officer John Bordelon approached him about joining the board. After a few passes, Maraist accepted the offer. “I’ve always loved banking, I knew banking, and I just thought it was a good opportunity,” he says. “I’ve had other opportunities to be on bank boards. The Home Bank story I thought had a lot of appeal to it.”

Within no time Maraist was named chairman of the board of directors.

Until three years ago, the bank had locations only in Lafayette. Today, Home Bank has nine branches in Lafayette Parish, one in Crowley, one in Baton Rouge, and another coming soon to the Capital City.

Not long after Maraist came on board, Home Bank’s members started talking about taking the bank public. By that time, most savings and loans in the country had already converted to stock.

It’s been more than a decade since a local bank conversion. IberiaBank (formerly Iberia Savings Bank) converted to stock in 1995, followed by Teche Holding Company (Teche Federal Bank’s parent). The following year, it was the century-old LBA Savings Bank’s turn to convert; LBA was later purchased by IberiaBank in a deal valued at $52 million in stock and cash. All three conversions were very good IPO investments for depositors. Today, with bank and thrift valuations at an all-time low, observers say Home Bank’s conversion is poised to be a strong investment opportunity.

Maraist won’t take credit for the stock conversion idea, but Bordelon says he’s been involved from the get-go. “He and I converse regularly on issues associated with the conversion. He’s very knowledgeable as to the path that we are taking here and surely will be at our side as we take on all of these different requirements that the regulators put on us.”

Home Bank sat quietly for so many years, watching mutual conversions take place around it, so why convert to stock now? Once content with its local presence, Home Bank has watched others around it increase their market share through branch expansions and now needs the capital to finance its own aggressive growth plan. The bank intends to expand its services into other areas of the state, and possibly even acquire other banks. Home Bank’s current plan is to focus on East Baton Rouge and St. Tammany parishes.

“We feel as though there are some very strong areas of the state that we’d like to expand our services into,” Bordelon explains. “The converting to stock allows us the capital to support our lending services and to facilitate growth in these new areas, either with new branches or the possibility of some acquisitions of other banks at some point.”

The initial public offering will first have to go through the procedures set forth by banking regulatory agencies and the Securities and Exchange Commission. The first step is to offer the stock to depositors of record as of March 31, 2007 — in essence the current “owners” of the savings bank. The second tier is an employee stock ownership plan offering, and at the third tier, stock is open to customers who made deposits after March 31, 2007. If the conversion reaches the fourth stage, Home Bank will open stock sales to the public as part of the IPO. The entire process will take several months to complete, and the stock will likely be trading on the NASDAQ exchange by August. Bordelon says he will not know how much the IPO will raise until the August appraisal, but he is estimating it will be in the range of $62 million to $92 million.

Home Bank’s conversion will not affect depositors. “The depositors will not feel this one bit, outside of their opportunity to become owners of the bank,” Bordelon assures. “As far as the bank is concerned, there is really no effect on any of the products or services that are being offered.”

With all of the sub-prime loan scandals and volatile stock prices, Maraist and Bordelon say some people are questioning their timing. Says Maraist, “A lot of people have asked me, ‘Mike, isn’t this a bad time to be doing these bank stocks? They are all getting killed. The sub-prime deal is out.’” Like a number of local banks, Home Bank has not been affected. “Our bank is solid as a rock,” Maraist says. “We don’t have one single sub-prime loan in our bank. And, I think we’ve got a good story to tell, and it’s time for us to go out and do some things. It will be a fun deal. I think it will be a good deal for Lafayette to get another aggressive, hometown bank.”

Maraist’s business associates are confident the entrepreneur’s experience and business savvy will be an asset during the stock transition. “Mike has an abundance of energy and loves doing business deals,” Castle says. “He is a very good negotiator and almost always ends up in his business and his dealings with a win-win situation.”