What’s All the Fuss About? 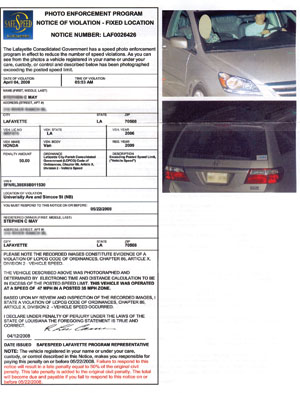 It was over in a flash. Literally.

We were headed for my daughter’s pre-dawn figure skating lesson and, even though we were late, I thought I was obeying the many changes in speed zone on North University that morning. As I passed through the traffic signal near Simcoe Street, a pulse of bright light illuminated the dashboard for just an instant. I turned to Emma, who is 12-years-old, and said, “I think I just got a ticket.” To my surprise, she knew exactly what I was talking about and said that a close family relative (who shall remain nameless) drives around with her sun visor down, 24/7. “She says it will keep the cameras from knowing who she is,” Emma said. Surely it couldn’t be that simple, I thought.

A week or so later, I got my speeding ticket in the mail and found out that I had been going 47 in a 35 mile-per-hour zone. At the time I thought I was in a stretch of road where the speed limit is 45. Either way I was speeding, and the evidence was indisputable, captured in amazing detail fore and aft. In the picture, they had masked my daughter’s face to protect the innocent. (While they were at it, it would have been nice if they had photo-shopped my mug as well to shave off a few years.) As I read through the letter, I realized that I had always thought of myself as a reasonably responsible driver, but I had definitely become more cautious since I got caught that morning.

I haven’t paid a whole lot of attention to the debate over Lafayette’s SafeSpeed program until now. It always seemed like a good idea to me, and I never really got what the fuss was about. I’ve heard suggestions that the strobe could be so unsettling for drivers that it could cause them to crash. That wasn’t my experience at all. I got flashed in the early morning darkest-before-dawn hours, and it was over before I knew it. Actually, it was so subtle it reminded me of the memory-zapping pen that Tommy Lee Jones’ character carried around in the movie Men in Black. My daughter didn’t even realize it happened until I said something.

Since then, I’ve had a few conversations with folks I know, and among them the support overwhelmingly outweighs the opposition. That’s anecdotal evidence for sure, but a recent poll commissioned by Mayor President Joey Durel shows that residents of the city favor the program 2 to 1. Critics will point out that the poll was paid for by the company that provides the service, but the pollster — Southern Media & Opinion Research — is highly respected.

One of my favorite observations came from a friend whose teenage son will soon start driving. “I like the fact that he knows that he’ll be driving on streets where someone is watching,” he said. I hadn’t thought of that. Emma will be driving before long too and, having experienced the system with me, she’ll know first-hand that it works. She can also go back and tell that close relative who shall remain nameless that the sun visor trick doesn’t.