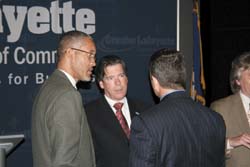 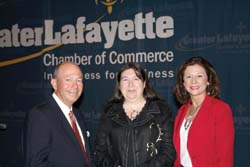 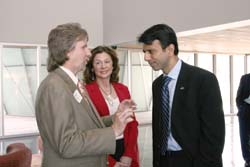 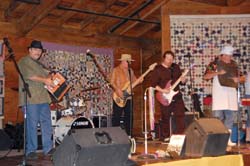 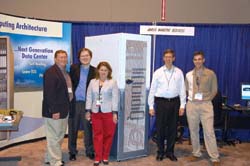 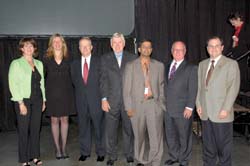 Gov. Bobby Jindal made a swing through Lafayette March 27 to meet with business and community leaders. The impromptu gathering was sponsored by the Chamber of Commerce and attracted about 120 people to hear the governor talk about the state we’re in — or hope to be in. Those in the audience were given highlights of some of the proposals to be presented in the current legislative session. The event was held in the impressive LITE Theatre where the governor breezed in fashionably late. However, no harm done as everyone appreciated his time and presence in the Hub City and in the LITE Theatre, which, by the way, is officially named the Kathleen Babineaux Blanco Theatre. Those in attendance included Chuck Vincent, Cathy Webre, Sen. Mike Michot, Demetrius Glover, Matt Roth, the Rev. Perry Sanders, Louis Perret, Marcus Brown, Michele Ezell, Sterling LeJeune, and state Reps. Rickey Hardy and Don Trahan.

TechSouth wrapped up another successful year and a whirlwind weekend of events, exhibits, outstanding presentations and workshops. More than 7,000 people attended the fifth annual technology trade show held April 7-9 at the Cajundome Convention Center. Keynote speaker Jim Thomson, global visualization leader with BP, gave an impressive “big picture” view of the international capability of technology. A roundtable luncheon sponsored by IT leader Peak Uptime focused on the top three IT questions companies need to make in five years. Panelists included Robert C. Farkaley, global vice president for Overland Storage, and Bob Jones, vice president of Cisco Systems. Workshops led by experts included discussions on Fabric Computing, LITE, technology opportunities for the oil and gas industry and tech opportunities in China. All in all it was a full weekend of activity that included a full load of technology information and updates with time for some cultural food and fun. SESAME, an international business exchange (formerly known as IBE) was held in conjunction with TechSouth. It’s a networking event held in rotating cities, and this year coincided with TechSouth, bringing in people from countries that included Belgium, France, Russia and China. This was the 21st year for the event, and the theme was “leveraging IT for the benefit of public and private development.” Participants enjoyed a reception and tour of LITE and all the workshops and events associated with TechSouth. The closing ceremony was held at Vermilionville following a guided tour of the village and a visit to the Jean Lafitte Cultural Center. A Cajun and Creole soirée polished off the weekend with Chris Foreman and The Bayou Boys playing music and demonstrating how to make gumbo. Participants from far and near had a jam-packed conference schedule but were refreshed by the delicious food catered by Vermilionville and even took a few turns on the dance floor.

The Greater Lafayette Chamber of Commerce sponsored an Eggs ’N’ breakfast at the Hilton April 15. More than 250 people were on hand for a timely talk on workforce development. Speaker Tim Barfield Jr., secretary of the Louisiana Department of Labor, spoke on reforms for the department now being proposed in the legislative session. Future plans to revamp the department include a name change to better reflect the focus on all aspects of the workforce. Chamber members also learned more about workforce training opportunities available through the state. The next Eggs ’N’ Issues will be held May 13 at the Petroleum Club with Lafayette Parish Assessor Conrad Comeaux scheduled as the featured speaker. 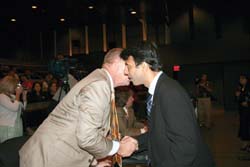 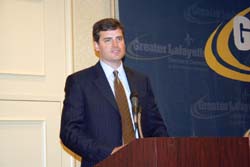 Tim Barfield Jr., secretary of the Louisiana Department of Labor 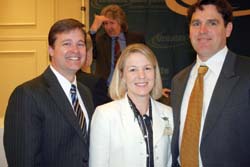 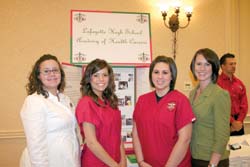