Dacoda Bartels comes to LAGCOE to convince the oil industry that an unmanned, all-seeing eye can improve their bottom line.

The offices of Aerobotics are tucked behind a Mexican restaurant, in a long horse shoe of a strip mall on Albertsons Parkway in Broussard.

Dacoda Bartels, the 28-year-old entrepreneur running the one-man, robotmounted aerial photography and inspection operation out of a single room in his family’s real estate offices, doesn’t look like someone making inroads into Lafayette’s bread and butter oil service sector. He’s got a cultivated West Coast drawl and long curly hair tied back behind his head, the word “protect” tattooed on the inside of his wrist. Bartels connects ideas quickly, jumping from thought to thought via seamless avenues. It’s clear that he loves what he does and that he’s excited to start a business in his hometown after years in the film industry in New Orleans and Vancouver, Canada, though he fights the good fight on public perception about what it is he does.

“I hate the word drone,” Bartels says. “The politically correct term is unmanned aerial vehicle, UAV. No one’s going to say that. If you look up the actual definition of the word ‘drone,’ it’s quite the opposite of what these things are doing.” 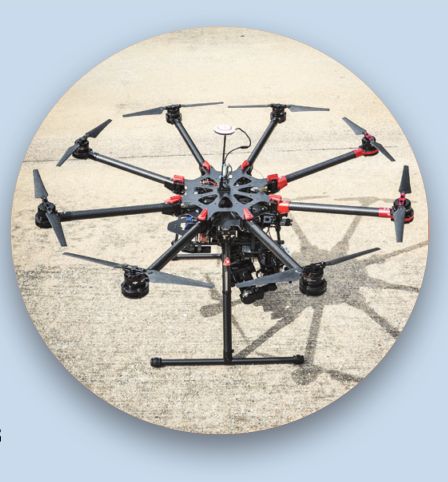 I get it. Drones are what you call the millions of mindless worker bees that build hives and manufacture honey. Insofar as they don’t operate with a ton of brain power, UAVs are drones. But in terms of possibility, application, flexibility and serving as a platform for continuous innovation, UAVs are a different animal. For starters bees are bees; UAVs are very sophisticated, remotecontrolled robots. They’re capable of flight automation, sure. Yes, the military uses them Dacoda Bartels to blow up high-value targets in foreign theaters of operation. But they’re also capable of boundless possibilities in peace time.

Bartels will make you a believer. He shows me an aerial photograph of the top of a flare stack towering above a distance easel of lush green fields. It’s the perspective you get from a low-flying passenger plane — the world nipped and tucked from above in right angles and perfectly cropped furlongs. It’s an arresting photo of man-made industry towering and burning above man-sculpted nature. I can see why this stuff excites him so much. Not only can he provide low-cost, low-risk inspection of hard-to-reach facilities and spaces, but he’s also placed himself on the frontier of the third dimension, taking in views that most of us only see in the movies.

As a licensed helicopter pilot buzzing around New Orleans’ hopping film industry of a few years ago, Bartels was living the high life. He was in his mid-20s walking onto million dollar movie sets, mingling with stars and shooting the kind of sweeping aerials that make the movies look like they’re worth the money. But Bartels’ time in a Hawaii flight school before his sojourn in the film world gave him an inkling that not all that glided was to remain gold, even as he minted money as the cheapest chopper-mounted camera operator in New Orleans. At that flight school, he met his mentor, a veteran cinematic photographer who introduced him to UAVs and brought him onto his first movie sets in Vancouver as part of his chopper film unit.

Bartels was immediately fascinated by the then-esoteric robots that have since captured the imaginations of the tech deities at Google and Facebook (who are exploring the possibility of replacing communication satellites with solar-powered drones) and have sent tin-foil haberdashers scurrying in fear. Lighter than light, cheaper than choppers and steadily climbing the tech tree, UAVs were the future of aerial photography. Bartels could see that UAVs were going to ground his jet-setting career and make his dream obsolete, if not soon, certainly eventually. Five years after leaving flight school and riding the Hollywood wind, Bartels scuttled his film operation, Barnstorm Cinema, and set off to introduce Lafayette’s expansive oil and gas, infrastructure and engineering industries to UAVs and the unmanned, all-seeing eye.

Since moving back to Lafayette a year ago, Bartels has amassed a small fleet of UAVs with different sizes, payloads, speeds and duties. They look like robot spiders, with modular legs varying in number according to the model, sporting twin chopper blades on each appendage. He outfits them with stabilized gimbals that can support remote sensing technology, infrared cameras and photogrammetry cameras, all of which provide previously elusive images of our environment in illuminating, high definition clarity. Hearing him talk about the different field-equipped devices and ease of retrofitting, you get the sense that he doesn’t really miss his halcyon days in Hollywood South.

For Bartels, introducing UAVs to Lafayette industries is a no-brainer. Oil companies spend heaps of money decommissioning rig platforms, sending teams of inspectors on boats to climb abandoned rigs for pictures and records. Acadiana has scores of bridges over waterways that demand inspection for public safety, forests of flare stacks that need examining and gallons of municipal water towers that spring leaks.

The height and dangerous inaccessibility of these structures require personnel to put themselves at high risk and liability to their employers.

“I grew up here and knew a lot of guys who do these crazy jobs that are extremely risky,” Bartels tells me. Some of them have gotten hurt, some of them haven’t come home because they’re inspecting something. I thought, ‘That would be so much easier to do that with a drone. Wouldn’t it?’” Bartels will be performing live demos of his flying cameras at this year’s LAGCOE trade show at the Cajundome and Convention Center Oct. 27-29. He’s spent the past year making his pitch to a host of companies around the Gulf Coast, trying to loosen wallets and minds kept shut by years of business customs and techniques. Still, Bartels is optimistic about the future of his company, especially considering he’s hawking a technology that’s getting better and cheaper with each passing year. Meeting an oil economy on the bust means he’s faced with a business sector likely looking for ways to lower costs, especially by adopting flexible platforms built on cheaply acquired technologies. By providing those companies with an option cheaper than helicopter surveillance or less risky than sending personnel into teetering scaffolds, Bartels has good reason to keep his hopes flying high.