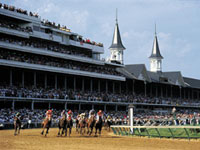 But Desormeaux's no stranger to the Derby; in 1998 he won riding Real Quiet (as well as the Preakness that year, the second leg of the Triple Crown) and again in 2000 on Fusaichi Pegasus. In 1989, Desormeaux broke the record for the most wins in a year with 599, surpassing the previous record of 546 set in 1974.

In tomorrow's Derby, Albarado will ride Z Fortune, Borel will ride Denis of Cork, and Desormeaux will ride Big Brown. Live coverage of the Kentucky Derby begins tomorrow at 3 p.m. on NBC.