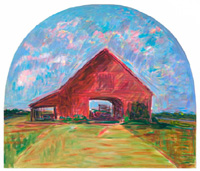 When Elemore Morgan Jr.’s recent exhibit opened at the Arthur Roger Gallery in New Orleans on Saturday night, Morgan himself was noticeably absent from the event.

“It was a great opening,” Roger says. “Elemore has a very large draw, and a lot of people weren’t aware of his health. That was a bit difficult, but the room and the colors themselves were so celebratory that everyone had a good time.”

Since April 8, Morgan, the influential 77-year-old local artist, has been recovering from open heart surgery in a Baltimore hospital.

The exhibited works include a dozen new pieces, including Morgan’s trademark and vibrant south Louisiana landscapes, as well as views of New York City and New Orleans. Morgan’s latest exhibit at the Artuhur Roger Gallery runs through May 28.