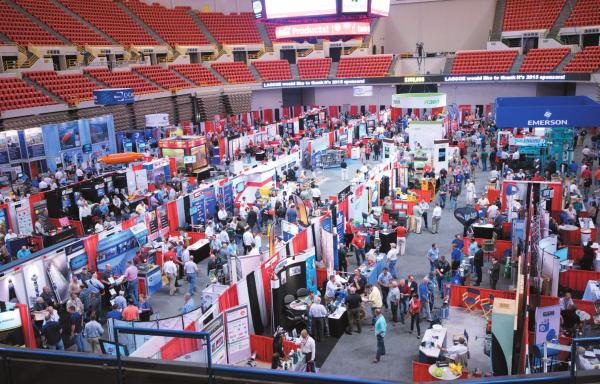 With more exhibitors than ever, LAGCOE celebrated 60 years fueling the local economy.

LAGCOE is that rare breed of event bringing both immediate and long-term benefit to Lafayette. With at least $10 million spent locally during the few days alone of the oil and gas expo held at the Cajundome and

Convention Center in late October, the Louisiana Gulf Coast Oil Exposition is an opportunity to reach far beyond the parish lines of Lafayette.

Since 1955, LAGCOE has been fueling relationships and opportunities to the industry that is the lifeblood of Acadiana — something perhaps more important now than ever.

“Year 60 has been about innovation, which is a key component to the oil and gas industry, especially in a down market, and about creating new generations of workforce for the industry,” says Angela Cring, LAG- COE’s executive director.

Cring says the New Technology Showcase went to new places this year by not only allowing winning companies to present at LAGCOE, but also giving them the opportunity to make their own commercials for their new technology, noting the official LAGCOE video provider, Infinite Focus, filmed the promos for the showcase.

“The addition of the Energy Pitch Challenge with INNOV8 Acadiana and LEDA’s Opportunity Machine was a huge success,” she says. “It allowed us to promote products and ideas that are just getting off the ground and ready to be catapulted into a marketplace hungry for efficiencies and cost-saving innovations.”

For participants like sponsor Cheniere Energy, a Houston-based company pursuing the development of liquified natural gas terminals, the expo is a chance to raise their brand and connect even in the midst of a lag in the industry.

“LAGCOE is an upbeat story Cheniere can be a part of as they raise awareness and start exporting later this year, and as they are unveiling a new plant in Sabine Pass in the spring,” says Dawn Cole, director of external affairs at The Picard Group, which handles Cheniere’s involvement in LAGCOE.

She points out the immeasurable ripple of an expo the size of LAG- COE in Lafayette. With a $10.5 million direct impact on Lafayette, the expo included 448 exhibitors and 16,400 attendees.

“The industry-specific impact is much harder to measure, but we know it is significant based on anecdotal information we receive from participating companies who tell us things such as ‘the show paid for itself within the first hour’ or ‘I remember that deal started at LAG- COE,’” Cring says.

LAGCOE is that unique opportunity for both small and large businesses to benefit, whether it’s networking and reconnecting with previous business associates or meeting new ones. In a marketplace where online connections can be made in seconds, there is still immeasurable value in making face-to-face or product-to-face connections.

“Building personal relationships is a huge part of a trade show, but especially so when it’s in the midst of the great hospitality of Acadiana,” Cring says. “LAGCOE keeps Acadiana in the global spotlight for the industry as the place to meet with small- to medium-sized companies who are nimble enough to create international partnerships in overseas markets and as a breeding ground of industry innovation.”

Innovation was the word of the 2015 expo not only within the oil and gas industry, but LAGCOE itself as organizers celebrated 60 years and the strides made from a small show to the global stage.

“Over the years the LAGCOE show has evolved from a regional oil show focused mostly on offshore to an internationally known on and offshore oil and gas exposition that provides access to a diverse group of exhibitors, technical education, global business opportunities all wrapped up with a Cajun hospitality bow,” Cring says.

In addition to the biennial expo, LAGCOE has become a regular force in the industry with year-round efforts to promote commerce and education, whether it’s via networking events or career development and education programs. And so, as concerns continue about the future of oil and gas and what that means to the Acadiana economy, efforts like LAGCOE continue to evolve even as there was some clear evidence of a downturn — fewer hiring companies at the career fair held during the event and some exhibitors choosing smaller booths. The results, however, were not as undesirable as expected — more room meant exposure for more businesses.

“The current state of the industry caused many returning exhibitors to choose smaller exhibit spaces allowing many first-time exhibitors who had been sitting on our waiting list an opportunity to get into the show,” Cring says. “We went from 416 exhibitors in 2013 to 448 in 2015. It was great to see fresh faces and more diversity in the show.”