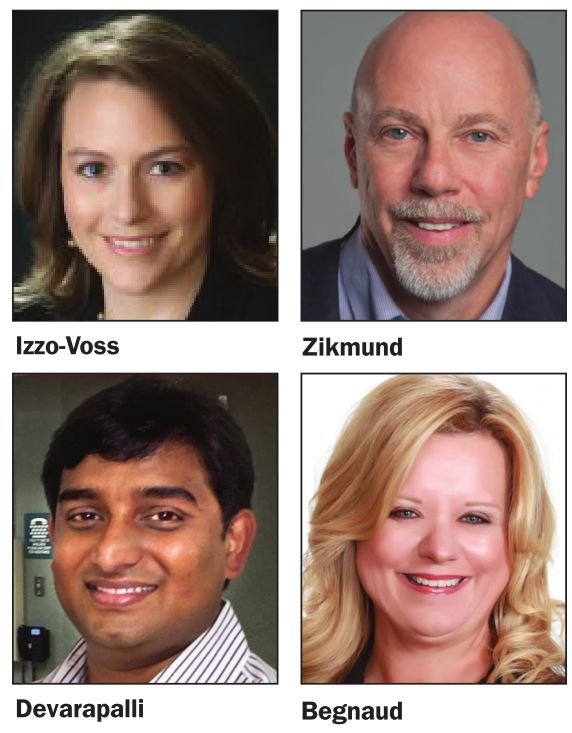 Michelle Izzo-Voss has been named director of development and awareness at Faith House, a domestic violence crisis center and shelter for women and children fleeing abusive relationships. Izzo-Voss has 16 years of experience in the nonprofit sector, serving in public relations, fundraising, community education and management. She began her nonprofit career at Faith House and has been involved with other causes over the years, including breast cancer awareness and suicide prevention. Her return to Faith House reunites Izzo-Voss with her passion: domestic violence prevention and awareness. As development and awareness director, Izzo-Voss will spearhead increasing fundraising to support the programs offered by Faith House as well as oversee public education and awareness.

Mike Zikmund has been promoted to director of sales at KATC TV3. He joined the station in June as regional/ national sales manager and a month later began serving as the station’s interim director of sales after the previous director left the company. Zikmund is a native of Evansville, Ind., and a graduate of the University of Evansville with a bachelor of science degree in radio/TV/film. He also has extensive broadcast television station sales management experience in the state, having previously worked in New Orleans for three years as general sales manager for WVUE-TV and 12 years as the sales director for WWL-TV. He also held other sales management positions at WVTM- TV in Birmingham, Ala., WGNO-TV and WNOL-TV in New Orleans and at KBSI-TV Cape Girardeau, Mo. KATC is privately owned and operated by Cordillera Communications, the broadcast television division of Evening Post Industries based in Charleston, S.C.

Acadian Hospice and Palliative Care has opened a new Lafayette location at 458 Heymann Blvd., Building A. The facility’s hospice professionals provide the emotional, spiritual and medical support needed when patients are facing the final stages of life. Hospice services help patients live comfortably, with dignity, when a cure is no longer possible. Hospice care programs can be provided in any place a patient calls home, including nursing homes and assisted living facilities. Acadian Hospice and Palliative Care is part of LHC Group, a Lafayette-based national provider of post-acute care services.

The Blake at Lafayette has hired Susan Begnaud as executive director. Begnaud has more than 25 years of experience in health care management, having previously served as the regional director of United Blood Services covering the southern Gulf region. Born in Texas, she has lived most of her life in Lafayette and graduated from UL Lafayette. With a projected completion date of early spring, 2016, The Blake at Lafayette will offer a new option in senior living. The 93,000-square-foot retirement community is locating at Kaliste Saloom Road and Polly Lane and will offer 110 apartments with “resort-style” amenities, for assisted living and memory care residents. It is owned by Alabama-based Quality Senior Living and operated by Blake Management Group of Jackson, Miss.

Dr. John A. Hendry was named Distinguished Alumnus of the Year at the 2015 LSU Health New Orleans School of Dentistry Alumni Day. After earning his doctor of dental surgery degree and completing his pediatric dentistry residency at LSU Health New Orleans School of Dentistry, Hendry moved to Lafayette to begin a private practice. Since 1980, he has served as an adjunct gratis lecturer at the school for both dental students and pediatric residents. He has hospital affiliations at Lafayette General Medical Center, Women’s and Children’s Hospital, Our Lady of Lourdes and the Surgery Center. The award recognizes an LSU Health New Orleans School of Dentistry graduate who has shown extraordinary lifetime professional achievements in the areas of dental education, dental research or community service.