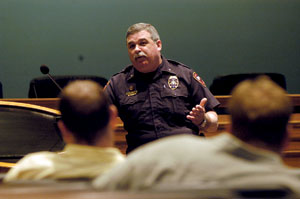 Lafayette Police Chief Jim Craft steps out of the council auditorium at City Hall, and Eric Cloutier is waiting in the hallway to talk to him. The co-owner of Marley’s Sports Bar and Karma wants to set up a one-on-one meeting with the chief. “I have some ideas,” Cloutier says, adding, “Hey, I’m trying to tell these [bar owners], ‘You’re stuck between two things — the money and the public safety.’” Shannon Wilkerson, owner of the Plaza and the Bulldog, is also standing by and tells Craft that the concerns he has expressed aren’t personal. “It’s all business,” Craft says, nodding his head. “Exactly,” Wilkerson replies, pointing to Craft with a thumbs up.

The chief has been working with bar owners on addressing security and police patrol issues facing Lafayette’s thriving nightlife scene. “I think we’re making progress,” Craft says, noting that more than a dozen bar owners showed up for the recent meeting. That’s far better than the turnout Craft saw two years ago, when he tried to get the group together while serving on the Downtown Lafayette Unlimited board. “I think we had two people show up then,” he says.

Now, two long-simmering issues are quickly coming to a head. Because of increased liability concerns, the city plans to prohibit its officers from working off-duty security at bars. Faced with a tighter budget, Craft also has confronted bar owners with the reality that a successful downtown detail, which includes up to 15 officers on any given weekend, will not be able to continue unless an alternative funding source is identified. The city is asking downtown bar owners to share in the expense.

There’s been a mixed reaction from bar owners, and they have struggled to organize and speak with one voice. Brandon Hargrave, co-owner of CityBar and Karma, says it would be a mistake to do away with the downtown detail. “We don’t want this to happen,” he says. “Festival International was great, the whole downtown revitalization has been great. There have been many cities that have made bad decisions, and we don’t want to be one of them.”

George Favaloro of Nitetown agrees. “We’ve got to stay as safe as we’ve been and Lafayette, you’ve got to admit, has been a pretty safe place, the way we’ve worked it out, the way the city has had police security in front of the doors. We don’t have a problem paying the money that we’re paying right now,” Favaloro adds, referring to the off-duty security hired by many bars. “We don’t have a problem paying for security.”

Jerry Favaloro, George’s brother and partner in Nitetown, doesn’t share the same views. “Y’all wanted an entertainment district downtown,” he told Craft at the meeting, “and then you got it. Let’s come up with some more money from the city.”

According to Cloutier, the bar owners’ problem is they’re all looking out for themselves and aren’t doing what’s best for the community. “The small bars are going to have to chip in with the big bars,” he says.

One major question is whether all bars should be included in paying for increased patrols, or just those in the downtown Central Business District, which is the area requiring the most police attention. Another question is whether restaurants and other businesses will be included in helping pay for the late-night detail. And there is still no plan for how any payments will be enforced.

City-Parish President Joey Durel is looking for some type of cooperative endeavor agreement with the bar owners, but who pays, how, and how much is yet to be determined, according to local government’s chief administrative officer, Dee Stanley. “We are literally at the infancy stage of trying to craft this proposal,” he says. “Whatever works that has the support of the people downtown and in areas that will be impacted and helps us reduce the [police] overtime budget is a workable solution.”

Stanley, Durel, Craft, and Chief Financial Officer Becky Lalumia plan to meet this week to begin drafting a proposal for the bar owners to consider. Another meeting is tentatively scheduled for mid-June to discuss the options.

At last week’s meeting, Craft told bar owners to consider the value of police security. “We like the fact that Lafayette is prospering,” the chief says. “We like the fact that downtown has succeeded. A lot of people come out down here because they have a great time. They have a variety of establishments to choose from, and it’s safe. And the moment they feel that it’s not safe, they’re going to stop coming. So I think it’s in the best interest of everyone to work together.”

The downtown police detail began as Jefferson Street started to see its revitalized nightlife about six years ago. “The funding was available at the time,” Craft says. “But it was never intended to be a permanent assignment funded by the taxpayers. It was to provide relief to the patrol shifts who were having to answer more and more calls for service in that one area. And of course the popularity of the location continued to grow, and many new businesses opened up in the meantime. It just kept growing.”

Craft says the downtown detail alone now costs the city police department approximately $312,000 a year, or $26,000 a month. In recent years, the detail has been maintained by floating funds available because of the department’s high number of vacant positions. Following a recent surge in recruiting and staffing, those funds are no longer available. Overtime pay is being cut across the police department, and Craft says he can no longer justify the expense.

At the meeting last week, Craft told bar owners that continuing the downtown detail with no additional funds would mean cutting vital services elsewhere. “We’re talking about cutting back detectives and taking resource officers out of the schools,” he says. “I’m not going to do that to put security out in front of some bars. It goes above and beyond the normal realm of police services.”

When Cloutier contends that he is already paying taxes that should go to the downtown detail, Craft replies that the current police service level for downtown bars is 10 times what a normal tax-paying business receives. “I’ll go round for round with anyone who wants to have a debate on that,” he adds.

“As one of the [city] attorneys put it,” Craft says, “we cannot afford to provide liability and insurance and workman’s comp coverage for private industry. That’s not government’s function. You know, which is basically what we’re doing when they get let out of a suit.”

“Our suggestion,” Craft adds, “is that what they were spending to pay these police officers to stand at their door, they dedicate toward this detail, and they’ll have increased presence and better service than just the one guy working there.”