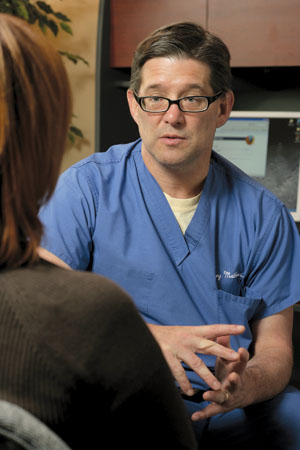 The American Cancer Society estimates that 178,480 women and 2,030 men in the United States were diagnosed with invasive breast cancer in 2007. The latest available statistics show that out of 100,000 females in Louisiana, the incidence of breast cancer in white women was 121.6 and black women was 123.7. But, all is not bad news. These figures also show that between 2001-2004, incidence rates decreased by 3.5 percent each year.

Undoubtedly, one of the factors in this decrease is that women are following doctors’ recommendations for greater use of screening and increased early detection of breast cancer.

For years, film mammography was the “gold standard” for finding malignancies. Now new technologies are pinpointing tumors quicker and more accurately than ever, leading to additional screening and diagnostic choices for both men and women.

As Lafayette continues to develop a reputation as a medical hub for Acadiana, it has been expanding its offerings when it comes to breast cancer imaging and dignosis centers. Some, like St. Agnes Breast Center at Our Lady of Lourdes Regional Medical Center and The Breast Center at Lafayette General Medical Center, focus solely on breasts. Others, like Laborde Diagnostics, perform radiology on other areas of the body as well. Now two brand new breast centers that incorporate the very latest in imaging technology are giving patients even more options.

Dr. Gary Mathews, the former in-house breast imaging specialist at the Elaine M. Junca Breast Center at Women’s & Children’s Hospital, which closed this spring, is launching his own practice. The Breast Center of Acadiana, under construction in River Ranch, will occupy 7,500 square feet on the first floor of the building housing the Thibodaux, Hebert, Deshotels & LeBlanc CPA firm. The new facility will offer specialized technology, including mammography, a breast ultrasound machine and a stereotactic biopsy unit. The local radiologist is contracting with Dr. David Jewel, a radiologist who will provide breast MRIs — a more expensive imaging technology recommended for certain at-risk patients — on the same floor. The center is projected to open in mid-June.

Mathews started his radiology practice in 1995 as a contract physician with HCA, the owner of Women’s & Children’s Hospital. As radiology director, he worked with patient coordinator Elaine M. Junca, a registered nurse, to develop a breast imaging facility. Tragically, Junca succumbed to breast cancer in 2003. In her memory, the hospital named the facility in her honor.

For the past five years, Mathews has focused exclusively on breast imaging. Since 1996, he has interpreted more than 113,000 mammograms and performed nearly 2,700 biopsies. His approach to diagnostic testing is different than most radiologists.

Traditionally, breast imagers read the films, generate reports, and send them to primary physicians to give results to patients. Mathews, however, has the patient sit in a private waiting area after a diagnostic procedure such as an ultrasound or biopsy, then delivers the news himself. “The single thing that I do that many radiologists don’t like to do is to go in, talk to the patients and give them their results,” he explains. “When the procedure is over, we go talk to them to tell them what’s going on, because by that time, most of them are very scared. The responsible breast imager should be the one who guides the patient along that process until the diagnosis is made.”

At the new center, Mathews will start with eight employees. Patients are already scheduled for appointments beginning June 23.

HCA has also recently co-ventured with Dr. Robert Lapidus to open a free-standing breast center in the newly-developed medical complex at 5000 Ambassador Caffery Pkwy., near the hospital. Lapidus’ practice is dedicated to breast diagnostic imaging and interventional procedures.

The building features comfortable, plush seating, as well as dressing, waiting and doctor-patient conference rooms. The inside looks more like a luxurious spa than a medical facility. In the women’s-only waiting area, called the “Sanctuary,” patients can relax while overlooking a beautiful fountain and garden dedicated to Junca’s memory.

The Women’s Imaging Center also says it is the first facility in Louisiana to offer both the dedicated breast MRI, called Aurora, and the U-Systems automated whole breast ultrasound (which is not covered by insurance). Additionally, the center offers digital mammography with computer assisted detection, hand-held ultrasound, bone densitometry, vacuum-assisted breast needle biopsy and stereotactic biopsy, a procedure also conducted with needle.

General recommendations are for yearly mammograms for women beginning at age 40, with those at higher risk starting younger. Breast MRI, which Lapidus says gives a clearer picture of the breast tissue than mammography, is recommended for women who have 20 to 25 percent or greater lifetime risk of developing breast cancer based on certain risk factors, such as family history. Also, men and women who test positive for the breast cancer genes BRCA1 or BRCA2 qualify for breast MRI.

“Breast MRI has become the most evolving and most exciting technology in breast cancer diagnosis and management,” Lapidus says.

Like with most medical technology, imaging specific to the breast is continually improving. With each breakthrough, Lafayette’s major hospitals and independent centers say they will invest in the latest advancements in their efforts to turn the tide on this deadly disease — which kills a staggering 40,480 women each year in the United States, 750 of them in Louisiana.