This year’s Southern Open exhibits some of the Gulf Coast’s most innovative artists. 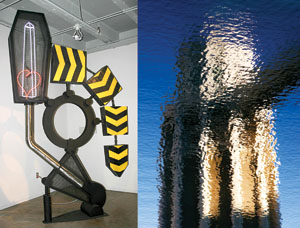 New works from artists across the Gulf South challenge what we know about ourselves and our environment. That’s exactly the intent of the Southern Open 2008, the juried contemporary art show at the Acadiana Center for the Arts. Artists from Alabama, Florida, Louisiana, Mississippi and Texas submitted 777 works — and the 105 best of the best will be on exhibit (and also for sale) through July.

Grand Coteau photographer John Slaughter is best known for his portraits of Catahoula hounds. But since 2004 he has been fascinated with water. “I continue to be intrigued with water,” he says. “If it’s at all swimmable, I want to get in it.” His recent show, Water Visions, explores the reflective nature of water. Last year, Slaughter was returning from the Burning Man festival in Nevada and stopped at Hoover Dam, which spans the Colorado River on the border between Nevada and Arizona. “The dam is a beautiful Art Deco structure,” he says. Babylonia, Hoover Dam (left), is Slaughter’s entry. “The towers are one of the best examples of that kind of stylized architecture. They look like Sumerian ziggurats,” he says. “With my photography, I’ve been moving from the literal to the abstract, pushing the envelope of the images.”

Southern Open 2008 pushes the envelope this year, serving up a broad range of artworks that challenge viewers more accustomed to the local landscape. Take Texan Dewane Hughes’ gigantic sculpture Angle of the Dangle (above). Dominating the lobby of the art center, with its highway detour stripes and vertical neon component, it’s an exciting entry point to the show.

Much of the work in the 2007 Southern Open was conceived as a reaction to hurricanes Rita and Katrina. This year, the art reflects a turn back to more traditional sources of inspiration.
Southern Open 2008 opens during ArtWalk on May 10, 6-8 p.m., and will be on exhibit through July. Artists awarded first, second and third place will be announced at 7 p.m. The first place winner of the Southern Open 2007, Lou Blackwell, will have a new exhibit in the Side Gallery. Louisiana Crafts Guild will introduce works by glass artist Ange Riehl in the Vault, and Louisiana Folk Roots will hold Jam Des Amis in the Art House. For more information, call 233-7060 or visit www.AcadianaCenterfortheArts.org.