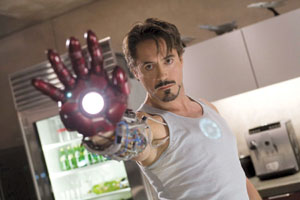 If Tony Stark’s livelihood has been weapons of mass destruction, his personal life has been a minefield of massive distractions. He is a paragon of semi-wasted potential, a boy-genius-turned-pioneer in the fields of arms manufacturing, engineering, robotics, computer science and a whole host of other unimaginably lucrative brain-bound pursuits. As if to counterbalance these geek talents, and maybe to sublimate his guilt, Stark routinely abandons the lab for less intellectual pursuits, acting out as a poor little rich boy who craves the rush of speed, sport, Scotch and sex. He wants to tinker with his toys and reap the obscene profits of his trade — then bet the house on a craps game in Vegas and go home with a gorgeous blonde. He’s a jackass of all trades.

Stark’s muscular left-brain has constructed a life completely devoid of consequences. As the heir transparent, he’s the face of Stark Industries, but smooth-headed, smooth-tongued Obadiah Stane (Jeff Bridges) is the man behind the curtain minding the dirtier details. When Stark (Robert Downey Jr.) brings home one of his many conquests, his artificial intelligence butler Jarvis wakes her the next morning, and his loyal assistant Pepper Potts (Gwyneth Paltrow) shows her the door with contemptuous professionalism. Stark, his military liaison friend Jim Rhodes (Terrence Howard) points out, has no respect for himself so it follows that he doesn’t have the smallest shred for anyone else either.

Then Afghanistan happens. On an official business junket to unveil his latest creation, the devilishly destructive Jericho missile, Stark is ambushed and abducted by a Middle Eastern terrorist group known as the 10 Rings — a terrorist group that is, in the first of a long line of irony-laced complications for our billionaire bad boy, armed to the teeth with Stark Industries-branded weapons. Wounded during his capture, Stark wakes up with a heart problem. His fellow hostage and fellow scientist Yinsen (Shaun Toub) has implanted an electromagnet in Stark’s chest, the only thing that’s keeping all the shrapnel in his body from racing to his heart. He’s also got a brain teaser: his captors want him to build them a Jericho missile. Knowing that their promises of safe release are lies, facing his rudely awakened mortality, suddenly realizing the unintended and long-ignored consequences of his life’s work, Stark sets to work, not molding a missile, but birthing a mission. Using the materials at his disposal, the fear and the anger and the scraps of metal and wire, Stark sets himself free — and finds the beginnings of another man inside, an Iron Man.

For a screenplay with four credited writers — Mark Fergus and Hawk Ostby (two of the five writers on the Oscar-nominated script of Children of Men), joined by Art Marcum and Matt Holloway — Iron Man achieves a laser-like focus. When the action comes, it is fast and brilliantly rendered by director Jon Favreau (Elf) and the wonderful wizards of ILM; computer-generated comic-book imagery has never been more seamlessly integrated into live-action cinematography.

But these fantastic-four wordsmiths know what the heart of their film is (and should be): an origin story that can’t gloss over its main character’s flaws and charms and mustn’t fast-forward through all of the research and development that goes into perfecting his superhero suit. Stark is as smart as he is complicated, and the script and its director rightfully give Downey ample time and room to dissemble and develop. Stark’s only superpower is his intelligence and his ability to channel it into tangibility. As the suit evolves, so does he. It’s the fact that he’s so fun and interesting to watch that keeps the middle stretch of the film alive.

Iron Man is remarkably well-cast. As the immovable Stane, the ever-underappreciated Bridges matches Downey’s brand of electric unpredictability; when they are together on screen, all we want is more. Howards’ Rhodes — like the audience themselves — loves Stark from the get-go against his will and better judgment, and Paltrow’s extremely-tried-and-true-blue Potts gets to be mouthy, not mousy. She also gets to do a lot more than just damsel-in-distressing, reaching a rare level of activity for a comic-book love interest. And yet all are simply drifting in orbit of Downey’s stellar Stark. He takes hold of the center with his humor and his humanity and never turns loose of it. Becoming Iron Man doesn’t make things simpler for Stark; he’s swimming in a murky sea of his own creation, fighting his way to the fresh air he has to believe is actually there.

The cast’s carefully calibrated collaboration exemplifies the beauty of Iron Man, and that is that nothing is overdone, even though the movie is a summer blockbuster through and through. This is smart, serious superhero cinema, the worthy stepchild of Christopher Nolan’s masterful Batman Begins. Excellent action, one-liners, character development, complicated moralities, a stunning narrative set-up for future features — Iron Man, like Tony Stark, has it all. Here’s hoping, as the future unfolds, they both figure out how to hold on to everything they’ve got.