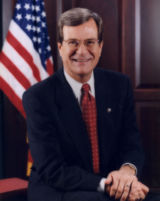 It’s become crystal clear that until Republican presidential nominee John McCain announces his vice presidential pick — or unless Gov. Bobby Jindal issues a preemptive, unequivocal statement that he would not accept the nomination if asked — Jindal’s name is in the mix. On the heels of conservative media icons Rush Limbaugh and William Kristol touting Jindal, one of the south’s formidable Republicans is now weighing in with his support of Jindal. Even though he recently retired, the man who held the positions of House Minority Whip, Senate Majority Leader, Senate Minority Leader, and Senate Minority Whip still carries a lot of weight. From Fox Business’ The Glick Report:

[Trent] Lott is a big supporter of McCain. When asked who he would recommend for VP if McCain asked him, he threw out the newly elected governor of Louisiana Bobby Jindal and Robert Portman, former House member from Ohio and former director of the Office of Management and Budget.