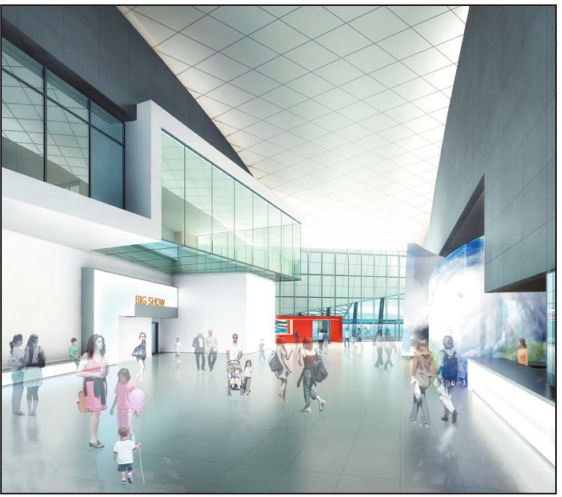 The National Hurricane Museum & Science Center is a thing. The building doesn’t exist yet, but the funding is coming along nicely with both public and private commitments to have the multi-million dollar center on Lake Charles’ lakefront complete within a few years.

It was originally conceived as a museum memorializing Hurricane Audrey, the 1957 storm that made landfall near Lake Charles and killed more than 400 in the days before satellites.

There’s a lot of science that has gone into the study of hurricanes since 1957, and that’s what’s going into the NHMSC — science.

The project, already underway in 2005, took a turn toward a broader mission later that year when Katrina and Rita struck the eastern and western boundaries of Louisiana.

The National Hurricane Museum is expected to receive up to 200,000 visitors a year and have an annual economic impact of $55 million while generating up to $1.5 million in tax revenue for the city of Lake Charles.

ABiz wanted to know more about the center so we reached out to Jill Kidder, the museum’s project coordinator.

In late 2004, the Creole Nature Trail All-American Road and the Lake Charles Southwest Louisiana Convention and Visitors Bureau wrote a grant to the National Scenic Byways to fund

a traveling exhibit to commemorate the 50th anniversary of Hurricane Audrey. Based on this funding, we sent out RFPs to exhibit designers across the country in the early summer of 2005. Well, you know what happened to our state in late August and September of that year — Katrina and Rita.

The designers came back to us saying we needed to think bigger and broader than a 50-year-old storm. They stressed that though these storms happen to the people of this region, they affect the nation. You have an obligation to tell the story and the lessons learned in order to help others plan for, survive and recover from future storms. And, this is a project of national significance. So we agreed there was more at stake, and the National Hurricane Museum & Science Center began.

It is also important to note that in 2008/2009 the National Hurricane Museum & Science Center merged with the America’s Wetland Discovery Center, a concept being planned for the lakefront in downtown Lake Charles. The board members of the NHMSC and the AWDC believed one could not adequately tell the story of the wetlands without telling the hurricane story, and vice versa.

As this partnership was being created, we began completing work on a schematic design of the building along with an economic impact study, a demand analysis, a business plan and preliminary exhibit designs to test through focus groups across the country.

How does this fit into the broader redevelopment of Lake Charles?

This is vital economic development, the centerpiece anchor project in the continuing redevelopment of Downtown Lake Charles. One will note in other successfully redeveloped city centers, there is usually those one or two anchor projects that are the catalyst to encourage other public and private investment. The NHMSC will be that catalyst.

What is the projected opening date of the museum?

How close are you to reaching the $65 million fundraising goal, and can you break down where the funding is coming from?

We have the pledge of approximately $28 million in State Capital Outlay, with the remaining coming from other corporations, individuals, foundations and other local government sources.

How did supporters arrive at the economic impact figures cited on the website?

This information was computed based on research using the gold standard RIMS II research methodology. We hired a DC-based firm to complete the economic impact study and to do our business plan.

Has the Lake Charles community embraced the project?

Yes. In fact, a local referendum to move the building site to a larger tract of land won approval with more than 70 percent of the vote.

Where will the focus of the NHMSC be: in science/education, in economic development through tourism, through both?

We see these as mutually beneficial goals for the community.

What role will federal and state agencies play in the day-to-day operations/programming of the NHMSC?

The NHMSC is a 501(c)(3), not-forprofit corporation and, as such, receives much attention from state and federal agencies. However, government will not be involved in the daily operations of the museum/science center.

That being said, NOAA/National Weather Service/National Hurricane Center have already begun to assist us in planning our educational direction and programming. We anticipate other federal partners like FEMA and Homeland Security will be joining their ranks.

On other levels, we are in conversations with our state universities, the University of Rhode Island Graduate School of Oceanography, the National Hurricane Center, the Coastal Protection and Restoration Authority, Governor’s Office of Homeland Security and Emergency Management and the Louisiana Department of Education, among others.

Has the downturn in energy prices affected the trajectory of the project?

Only to the degree that the petrochemical industry has scaled back its community relations programs and some funding. However, it’s worth noting that Cheniere Energy has already invested $600,000 in the project. Otherwise, our corporate investments remain diverse.

Number of total units in the four worker villages (or man camps) approved by the Calcasieu Parish Police Jury Planning & Zoning Board in the past year to house temporary construction workers.