Kleinpeter Farms, the Baton Rouge dairy that expanded their milk, butter and ice cream into the Lafayette market this year, has been under fire from agri-chemical giant Monsanto. Kleinpeter touts the quality of its milk in part by what’s not in it, a growth hormone called rBGH, developed by Monsanto to increase milk output in dairy cows. The Louisiana dairy which has been awarded the “Free Farmed” certification from the American Humane Association for its humane treatment of cows, has never injected the growth hormone into its herd, and demands the same promise from dairies from which it buys milk. 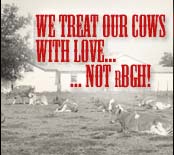 Riding the organic food movement, Kleinpeter began marketing their products with a label that reads “We treat our cows with love … not rBGH.” Monsanto objected, sending a letter to the Federal Trade Commission saying that there is no difference in the milk from cows which have been treated with rBGH (which was approved for use in dairy cows by the FDA in 1993) and the milk from artificial hormone free cows. They accused Kleinpeter of misleading their customers with deceptive advertising and labeling and “by falsely claiming that there are health and safety risks associated with milk from rBST-supplemented cows.”

Kleinpeter posted a section on their website , Frequently Asked Questions about rBST , outlining health problems cows, and potentially people, could have with the hormone.

“Many cows injected with rBGH have chronic cases of mastitis, the inflammation of the udder.  Also, fat levels, particularly long chain saturated fatty acids associated with heart disease, are increased with the use of the manufactured hormone.  rBGH milk contains high levels of Insulin-like Growth Factor-1 (IGF-1). IGF-1 is resistant to pasteurization and digestion, and is absorbed through the small intestine.  Whether the small additional amount of IGF-1 in milk from rBST (rBGH) treated cows has a significant local effect on the esophagus, stomach, or intestine is unknown.” The information is sourced to Monsanto’s website.

The FDA stepped in, requiring dairies that use the rBGH free label to also print a disclaimer. Kleinpeter milk now states on its back panel, “Government studies have shown no significant difference between milk derived from rBGH-treated and non-rBGH-treated cows.” Monsanto is currently attempting to persuade state agriculture chiefs to prevent dairies from advertising their rBGH free milk. And on the web, dairies are being attacked as fear-mongerers if they tout their rBGH free status. The website is called StopLabelingLies . One of its writers, FoxNews.com commentator and junkscience.com publisher Steven Milloy, as you might have guessed, is a former registered lobbyist for Monsanto. You can read the whole story, Monsanto's Harvest of Fear, in this month’s Vanity Fair.