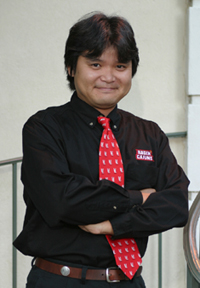 One of UL Lafayette's outstanding grads is making waves back in his native Japan. Guitarist and composer Jiro "Jireaux" Hatano recently had his song "Atchafalaya" broadcast on Radio Sakamoto. The program is hosted by Ryuichi Sakamoto, the award-winning musician, composer and producer.

In 2005, Hatano was named UL's outstanding graduate in the general studies program. Originally from Nara, Japan, he already had a degree and a job as a computer engineer for Panasonic before he quit and moved to south Louisiana, drawn by Cajun and zydeco music. He was a regular fixture on the southwest Louisiana music scene.