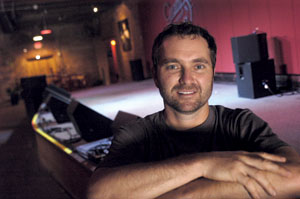 On Wednesday, May 7, Danny Smith became the latest owner of Grant Street Dancehall. Dave Maraist and his partners, the California-based Wide Eyes Entertainment, have sold the business and the building. Maraist says of his future plans, “I’m going to be beachside in Destin, Florida for a week.”

Maraist and company took over the historic downtown live music venue in January 2006 from Don Kight and his partners who had purchased the club in 2002. The latest incarnation of Grant Street reopened six months later on the 4th of July weekend, 26 years after the club’s original opening. Despite high-profile early bookings of acts like Jerry Lee Lewis and Dwight Yoakam and a completely renovated facility, Grant Street’s booking calendar was noticeably thinner as of late.

The 29-year-old Smith is no stranger to the bar business. “I don’t know if that’s good or bad,” he says. Smith owns the physical buildings for The Keg, College Station, Nitecaps, The Manor in Cade, and the old Kettle on Johnston which will soon open as the sports bar Brewskis. He also owns the businesses for Nitecaps, The Manor, and V Bar in downtown Lafayette, as well as two local florist shops.

Smith says the size and history of Grant Street was appealing. “We’re going to try to keep as much as the same tradition going,” he notes. In addition to the live acts that have become synonymous with Grant Street, Smith plans to bring in DJs two nights a week with a hip-hop night on Saturday nights. “I want to make the place a little more financially viable. This place hasn’t made money in almost 20 years. So there’s one night that’s going to have to carry the load.”

Neither Maraist nor Smith would comment on specifics of the deal.