_[Editor's Note: This story was edited to include the state's "Abuse of Office" statute.]
_
“I’m deciding this tonight,” District Court Judge Jules Edwards bellowed around 8 p.m. on Jan. 4 to Charles Middleton, attorney for Lafayette City Marshal Brian Pope, as Middleton requested a recess and end to the day’s proceedings to accommodate the personal schedule of subpoenaed witness Chad Leger, Scott's chief of police. Defer and delay was all Pope’s counsel could hope for after 10 hours in court left his straw-built defense in tatters.

Edwards ultimately ruled that Pope’s responses to The IND’s public records requests on Oct. 8 and Nov. 30 were “woefully inadequate,” and that his decision to withhold documents was “arbitrary” and his failure to respond “unreasonable.” The IND is seeking the records to prove its assertion that the marshal, elected to office in December 2014, abused his office for political purposes — boosting Leger's bid for sheriff by attacking his opponent, Mark Garber — which is a violation of state law:

A. No public servant shall use the authority of his office or position, directly or indirectly, in a manner intended to compel or coerce any person or other public servant to provide himself, any other public servant, or other person with any thing of economic value. This Subsection shall not be construed to limit that authority authorized by law, statute, ordinance, or legislative rule in carrying out official duties.

B. No public servant shall use the authority of his office or position, directly or indirectly, in a manner intended to compel or coerce any person or other public servant to engage in political activity. For the purposes of this Subsection, “political activity” means an effort to support or oppose the election of a candidate for political office in an election. This Subsection shall not be construed to limit that authority authorized by law, statute, ordinance, or legislative rule in carrying out official duties.

Edwards awarded The IND its attorney fees and court costs, and the full penalties afforded in Louisiana’s public records statute — $100 per day for each day that Pope failed to respond on both requests until such time that the requests are satisfied. The exact cash amount of these remedies will be determined at a contempt hearing set for Feb. 29, at which time Edwards will also take up the matter of Pope’s violation of a Dec. 14 court order enjoining him from withholding any records requested by The IND that would satisfy both the requests. Further financial penalties could be owed pending the contempt of court hearing and any future criminal prosecution undertaken by either the district attorney or attorney general.

It’s not clear if Pope will be personally liable for all monies owed in the civil proceeding. The enforcement provision of Louisiana’s public records law stipulates that a custodian “shall be personally liable for the payment of any such damages, and shall be liable in solido with the public body for the payment of the requester’s attorney fees and other costs of litigation, except where the custodian has withheld or denied production of the requested record or records on advice of the legal counsel representing the public body in which the office of such custodian is located.”

On the floor, the day was a rout of Pope’s defense. Edwards dismissed Pope’s motion to exclude documents produced by a parallel public records request on LCG, and found no grounds for believing that The IND, IND attorney Gary McGoffin and LCG officials perpetrated — as Pope claims in a court filing — a “covert invasion” of Pope’s privacy by allegedly accessing LCG’s servers in person and conducting an unlawful search (to be clear, none of that happened). That Pope had a reasonable expectation of privacy for communications via his "@lafayettela.gov" email account, despite not being a city employee, was utterly dismantled by his own witnesses, outgoing City Attorney Mike Hebert and outgoing LCG Chief Administrative Officer Dee Stanley.

“All of this traffic got routed through LCG servers, and thus is as much property of LCG as it would be the marshal’s,” Hebert told McGoffin during cross-examination. “As soon as we became custodians we became responsible for producing the records. There’s a lot about public records law that I don’t like, but we’ve learned to live with it.”

Public records law, enshrined in Title 44 of the Louisiana Revised Statute, exists to check abuses of power and office by public officials by guaranteeing ready access to public information. Pope’s disregard of that mechanism of transparency served to obscure from public view his collaboration with then-sheriff candidate Leger's campaign in this political stunt masquerading as a press conference to disseminate public information.

Testimony given by his data consultant Alvin Noel Jr. — who Pope retained, after Judge Edwards suggested he hire an IT professional to conduct and certify a technically competent search of his emails — revealed that Pope had, in fact, deleted emails that we sought and were ultimately captured in LCG’s email server.

Most damning was Pope’s video deposition which, clocking in at just under three hours, was screened in its entirety for Judge Edwards. The deposition was videoed because Pope was on vacation and unavailable for Monday's hearing. On video, Pope is confronted for the first time with The IND’s possession of the emails from the LCG production. He becomes visibly agitated when faced with documents that contradict his previous testimony that he had never heard of Campaigner, did not coordinate his press conference with the Leger campaign, and that he never used nor authorized the use of Campaigner to distribute press materials pertaining to that conference.

Contained in the LCG production are exchanges between Pope and Leger campaign manager Hilary “Joe” Castille in which Castille supplies Pope with the text of his media advisory and statement for the press conference in question; an email confirming Pope’s registration of his @lafayettela.gov account with mailing list service Campaigner; email threads with reporters and private citizens in responses to the Campaigner-sent emails indicating he was fully aware of the advisory’s distribution; payroll documents showing his deputies were on duty for the press conference, and use of his office administrators and public email account to raise campaign funds.

"I'm a political figure. I can use my office for my campaign," Pope said of his fundraising via public resources. "My predecessor [Earl "Nicky" Picard] did it, too. I think everybody does it."

As a matter of sordid lagniappe, the LCG also produced documents showing that Castille provided Pope with the statement he read verbatim at the press conference, talking points for a KPEL interview, the text of Pope's endorsement of Leger and cue cards for a video spot covering the same smear-job on sheriff-elect Mark Garber that Pope attempted in his press conference. 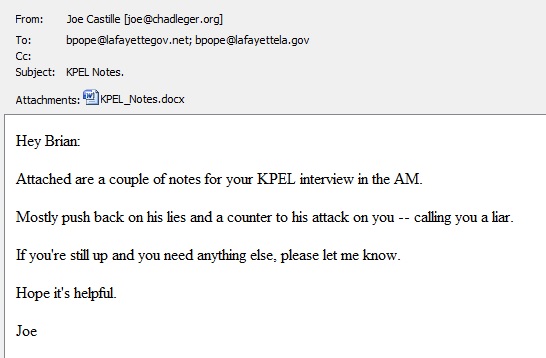 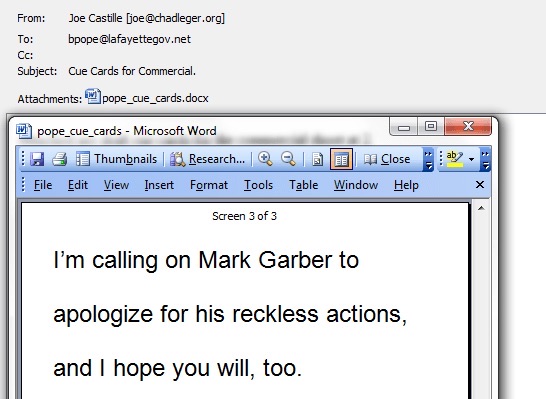 Further legal proceedings will determine the extent to which he has committed criminal offenses such as Malfeasance in Office, Abuse of Office and/or Perjury. He will have an opportunity at the Feb. 29 hearing to defend against charges of contempt specified in Edwards’ judgment.

While Edwards’ ruling marks a major narrative point in this saga, the story will continue to unfold well into 2016. Oh, and Chief Leger, who it seems had to drive in from Scott at least twice before taking the stand late Monday evening, never even got to testify.

IND attorney McGoffin objected to the relevance of Middleton's opening question about whether Leger had seen an increase in Latinos moving into his community. Edwards sustained the objection, and Middleton dismissed his increasingly frustrated witness. Tweet this.