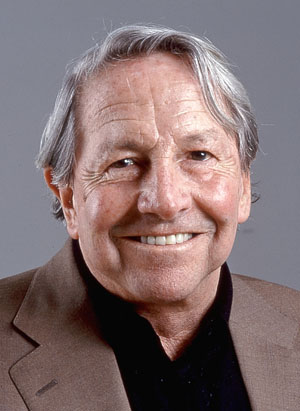 A giant in the world of modern art, Robert Rauschenberg , 82, died last night in Florida, surrounded by his family. American painter, sculptor, printmaker, photographer and performance artist, Rauschenberg acted as an important bridge between Abstract Expressionism and Pop art and is widely considered as one of the major artists of the 20th century. Rauschenberg had close ties to Lafayette. He was born in Port Arthur, Texas in 1924; while he was in his early 20s, his family relocated to Lafayette. His sister and brother-in-law, Janet and Byron Begneaud live here today.

Rauschenberg became part of the New York art scene of the 1950s, experimenting, pushing, inventing work that defied the labels of the art of the period. By the 1960s he had become an international star and was awarded the Grand Prize for Painting at the Venice Biennale in 1964. “He never stopped inventing,” says musician Dickie Landry, who was drawn to break the rules of music by Rauschenberg’s work long before the two met and became friends. “He was always pushing the edge. I can’t see the world without him.”

In 2005, the works of Robert Rauschenberg, along with those of his son Christopher, and his long-time associate Darrrl Pottorf, were exhibited in the Paul and Lulu Hilliard University Art Museum at the University of Louisiana at Lafayette. Former museum curator Herman Mhire says Rauschenberg was a creative force in the art world. “Having long since escaped the confines of style, and even the distinction between abstract and representational art, he recognized no rules other than those he had himself invented as the basis for his art.” Janet Begneaud, artist Fred Daspit and Rauschenberg came up with the idea for the three man show.

Rauschenberg stayed at the home of the Begneaud’s friend Kay Dore for the week of the opening. “He was such a fabulous character,” says Dore. “So full of life. He freely gave this enthusiasm. You couldn’t meet him without being affected by him in a positive way. He was a joy to know.” Although hospitalized,  Rauschenberg was planning new projects, his nephew Rick Begneaud said last week. Dore spoke to the family this morning. “He fought as long as he could. It was his body that finally gave out on him,” she says. “His spirit was unwilling to give up on life.”