Two of the potentially biggest onshore discoveries in Louisiana history are sparking an “insane” frenzy in the oil patch. 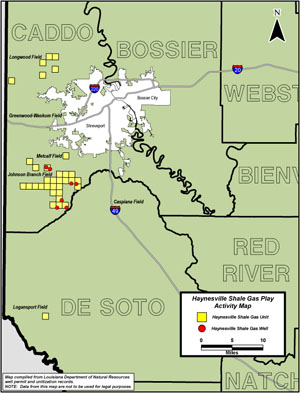 A gold mine, or fool’s gold? Nobody knows for sure.

For the past two years, companies have been quietly leasing acreage in what’s believed to be a natural gas-rich shale area in northwest Louisiana commonly known as the Haynesville Shale. Word of leasing activity in the multi-parish region became public in mid-March during conference calls by small Houston-based operators Goodrich Petroleum and Petrohawk Energy — news that outed shale home-run hitter Chesapeake Energy, which had hoped to keep the find under wraps for a few more months while it continued leasing acreage in the area.

On March 24 the Oklahoma City-based independent producer — a major player in the Barnett Shale in the greater Fort Worth area — finally disclosed what it’s been up to in Louisiana: “Based on its geoscientific, petrophysical and engineering research during the past two years and the results of three horizontal and four vertical wells it has drilled, Chesapeake believes the Haynesville Shale play could potentially have a larger impact on the company than any other play in which it has participated to date.”

Larger than Barnett — where Chesapeake’s net natural gas production is about 450 million cubic feet per day — and where Chesapeake and other competitors are operating more than 500 wells in what many experts believe is the largest onshore natural gas field in the country.

Chesapeake said it’s utilizing four rigs to drill Haynesville Shale wells and plans to increase its drilling activity level to about 10 rigs by the end of this year — and potentially more in 2009. The company owns or has commitments for more than 200,000 net acres of leasehold in the Haynesville Shale, which it believes hold 7.5 trillion cubic feet equivalents, and has a leasehold acquisition effort under way with the goal of owning up to 500,000 net acres. Chesapeake believes that amount will boost its reserves in the region to about 20 Tcfe.

By some estimates about 40 players are now scrambling for leases, and Chesapeake has once again gone into quiet mode on the project. Local companies and landmen working on the Haynesville Shale, some of whom cited confidentiality clauses with clients, are being equally tight-lipped. Though its boundaries or hot zones are not yet defined, the play’s parishes include DeSoto, the mid to southern areas of Caddo and Bossier, the southern tip of Webster, the western end of Bienville, most of Red River and the upper parts of Sabine and Natchitoches.

It’s stupefying that the frenzy that has consumed the north Louisiana parishes could have been kept quiet for so long, but not near as mind-boggling as what’s actually going on there. “Anyone involved in it has never seen anything like this, the amount of activity, the prices being paid and the competition,” says one Lafayette-based landman who is working in the Haynesville Shale but asked not to be identified. “Frankly, it’s overwhelming.”

“It’s insanity,” says Lafayette landman Robert Wade, who grew up in Shreveport and has been closely following the activity. Wade has friends in the land business that are renting houses and planning to put their landmen up near the project for a couple of years. “If I were 20, young and full of piss and vinegar, I might go there and get involved, but I have plenty to do down here,” he says.

Other landmen say Chesapeake had been quietly leasing property for $200 to $500 an acre and about a quarter percent royalty. “When the competition hit, the price went crazy,” Wade says, noting that he has a friend who owns 550 acres he leased for $5,000 an acre and a quarter percent royalty with a “no-drill” clause, meaning drilling cannot take place on his property. Says Wade, “All they can do is unitize it, put it in a pool with a producing well. But they believe the reserves justify [the price].”

The downside is the potential to drive up lease costs elsewhere in the state. “It’s going to make it difficult for us to do business in Louisiana,” says Wade, who works throughout south Louisiana. “If everyone thinks every lease should be worth $5,000 an acre here, the oil business will shut down.”

Chesapeake Energy is the largest independent producer and third-largest overall producer of natural gas in the United States; it expects to become the top U.S. natural gas producer by the end of the year. “Chesapeake has raised a billion dollars on Wall Street just to buy leases in this play,” Wade says. “That’s the rumor going around.”

Chesapeake’s CEO, Aubrey McClendon, is himself gobbling up the company’s stock, having invested $100 million of his own money in the past year. He now owns about 31 million shares, and that’s getting a lot of investors’ attention. “The degree to which he’s putting his own money on the table, skin in the game, indicates the degree to which he personally believes in the potential of the Haynesville Shale,” says Bo Billeaud, chief investment officer of Lafayette-based Billeaud Capital Management.

“This stuff always gets touted by and on behalf of public companies because investors like to hear this,” says local independent Paul Hilliard of Badger Oil. “The market likes them because they always talk about them long-term, and they may take a long time,” he adds, which is why his company is not involved. “You’ve got to make big capital expenditures, and that equipment may not pay off for six or seven years. We have to have more coming in than we have going out.”

Hilliard points out that the Haynesville Shale could be a big shot in the arm not just for the economies in the play, but for Acadiana’s service companies, many of which are already involved. “We’re a service and supply area,” he says. “We have only 15 exploration companies in Lafayette right now. For every guy who’s made a million dollars in the oil business, there’s been a hundred service and supply companies involved.”

The potential of the Haynesville Shale is so massive that Big Oil is getting in on the action. “Some of the majors are partnering with some of those guys,” says Chris John, president of the Louisiana Mid-Continent Oil and Gas Association, which represents major oil and gas companies. John declined to say which of his members are getting involved because his information is coming from the smaller players, who have asked for confidentiality until announcements are made. “The majors are looking at and negotiating and having a lot of discussions with the smaller independents. That shows you the amount of interest that’s there,” John says, noting that it’s been a while since these types of partnerships have emerged onshore. He’s hoping it’s a sign of what’s to come for domestic production, which has fallen off considerably in recent years. “When you look at the recent [record-breaking] lease sales in the Gulf, the problems in other countries like Venezuela, I think you’re seeing a trend of oil companies coming back home.”

Unlike the porous sands that holds much of Louisiana’s oil and gas reserves, shale does not give up the hydrocarbons easily. Geologists have known for some time that shale holds hydrocarbons, but the big gamble was the cost of getting to the reserves and then being able to produce in commercial quantities. Only at today’s substantially higher prices can that investment be economically feasible.

Just as word of the Haynesville Shale began to break, another Louisiana shale play began bubbling up — this one believed to hold an estimated 48 to 60 billion barrels of oil. The Tuscaloosa Marine Shale is a prospective area covering 3.6 million acres in Louisiana’s Florida parishes and parts of southwest Mississippi. In announcing its first quarter 2008 results on May 7, Encore Acquisition Co. of Fort Worth, Texas, disclosed that it has drilled two horizontal wells in the TMS and has amassed 208,000 net acres. Encore is believed to be one of the biggest players in the TMS, where it, too, has been quietly working for the past two years. A 1995 Louisiana State University study estimated TMS’ reserves at 7 billion barrels of oil, but ongoing advancements in horizontal drilling technology increase these plays’ chances of success. Encore’s first well was drilled out about 1,500 feet and has been producing continually since the start of May at a rate of 150 to 200 barrels per day. The second horizontal well was drilled out about 3,100 feet, and the company is awaiting production results.

Both Wade and Billeaud have heard from friends and colleagues who claim chaos reigns in some of the small court houses in north Louisiana, where landmen are researching records and Chesapeake is aggressively attempting to recruit them with lucrative job offers. “I’ve been there,” Wade says, specifically noting the courthouse in Red River Parish. “If you put five people in there you’re tripping over each other.”

What everyone does agree on is that it’s too soon to tell how the Haynesville Shale — or TMS for that matter — will ultimately play out. “What is not known is how much natural gas is trapped in the shale,” Billeaud says. “No two shales are alike. The key is how much organic material was deposited in the area when the shale was formed. The only way to absolutely verify whether the Haynesville Shale will be prolific is to do exactly what operators such as Chesapeake are doing right this very moment. Lease, drill, test and hopefully, produce.”

At this point, no amount of uncertainty is hampering the madness. Says Billeaud, “It’s the California Gold Rush over there.”