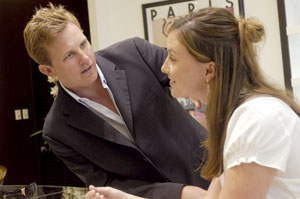 It was just a couple of years after he’d started designing jewelry.

“I was doing a store opening in Dallas at Ylang Ylang and a woman walked in and we had a long conversation,” recalls Lafayette native Shaesby Scott. “The next day I received an e-mail from her saying she spent all night dreaming about my earrings.” That’s when Shaesby learned that Karen — as in Karen Katz — was the president and chief executive officer of Neiman Marcus.

The rest, as they say, is history.

“It’s usually not that easy,” acknowledges Shaesby, who lives in Austin but was back home recently for a reception and trunk show at kiki in River Ranch, the upscale boutique that has exclusive rights to carry his line of sterling silver and 18-karat gold jewelry. “Saks [Fifth Avenue] came next, and in July we anticipate starting with Bergdorf Goodman.”

Marketed under his name, Shaesby, the jewelry — which ranges in price from $150 to several thousand dollars — is also in about 200 specialty boutiques across the country, and internationally he’s making a splash in Japan. “Japan is a very big market for us,” he says.

The son of Sherman and Joyce Scott, Shaesby graduated from STM in 1992 and took off to Colorado State University. Inspired by his mother, a painter and print maker, he earned a degree in sculpture and fine art. His specialty was large, welded steel sculptures, mainly three-dimensional, free-standing pieces.

Art remained his passion, but it was while working in Rio de Janeiro for his father’s Lafayette-based offshore mooring company, Delmar Systems, that Shaesby had his real artistic awakening. “What I noticed was the way Brazilian women expressed themselves in what they wore. Their jewelry was not an after-thought. It was artistic and expressive,” he says. “It was there that I discovered jewelry, but it was really a long-term desire of mine to find a way to combine my creativity with my passion.”

Fusing his art with fashion, Shaesby went to work turning out simple, classic lines of jewelry, many pieces featuring semi-precious stones and diamonds. In 2001 he starting cold calling on retailers in Austin. “I launched door-to-door,” he says. “I didn’t really understand that there were [jewelry trade] markets.”

Today, the 34-year-old designer’s Austin-based company — he and his wife are expecting their first child and he’s committed to keeping all of his manufacturing domestic — is experiencing 60 percent annual growth; he declines to release any figures. Shaesby’s easy-going personality and boyish good looks aside, it’s those alluring earrings — like the moonstone briolettes enclosed in an 18 karat gold pod calling out from the jewelry case at kiki — that women just can’t get out of their heads.

It’s easy to see why Katz was so dazzled that she helped launch the career of one of the hottest young jewelry designers in the country; Shaesby’s work has since been featured in top magazines like Cosmopolitan, In Style, Marie Claire, Lucky and Self.

“They’re an everyday look,” he says of his hand-crafted pieces. “I don’t design the special occasion jewelry that rarely leaves the jewelry box.”