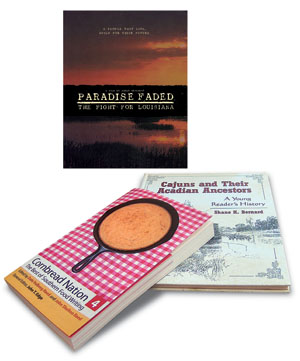 A CAJUN PRIMER
When Shane K. Bernard was growing up, he spent a lot of time researching his Cajun ancestry at the local public library. In addition to learning about his own heritage, he discovered that there weren’t any books geared for young readers interested in the history of the Cajuns. When the historian and curator for McIlhenny Co. had children of his own, he took it upon himself to write that book. Cajuns and Their Acadian Ancestors: A Young Reader’s History is geared for junior high and high school students, but adults will enjoy it just as well. The author of three previous books, Bernard will sign copies of Cajuns and Their Acadian Ancestors on Saturday, May 17 at Barnes and Noble in Lafayette from noon until 2 p.m. Cajuns and Their Acadian Ancestors retails for $18. For more information, visit www.upress.state.ms.us. — R. Reese Fuller

COASTAL SERVICE
The film Paradise Faded: The Fight For Louisiana opens with the prologue: “This documentary began in 2004 to address the loss of 25 square miles of Louisiana’s coast per year. In 2005, two hurricanes caused the loss of 217 square miles in less than 30 days.” Inspired by the Michael Tidwell book Bayou Farewell, Lafayette filmmaker Jared Arsement takes a comprehensive look at coastal erosion in Louisiana, its causes and the high stakes involved. With sweeping aerial footage of wetlands loss, an original score by Sonny Landreth and revealing interviews with commercial fishermen, coastal scientists and state political leaders, Paradise Faded makes a compelling and impassioned case for the coast. To view the trailer or order a copy for $15.99, visit www.paradisefaded.com. — Nathan Stubbs

GIMME CORNBREAD
If you’re a Southerner who loves reading about food as much as eating it, then the Cornbread Nation book series probably occupies a section of your bookshelf. Time to make some more room, because the newest volume, Cornbread Nation 4: The Best of Southern Food Writing, is now out in stores. Edited by Southern Foodways Alliance director John T. Edge, the latest Cornbread collection contains 53 stories that examine, praise and chronicle southern food and traditions — and includes an entire section devoted to Louisiana food post-Katrina and Rita. Contributors include the legendary late New York Times food writer R.W. Apple Jr., Pat Conroy, Rick Bragg, and The Independent’s Mary Tutwiler. Cornbread Nation 4 retails for $17.95 and is available locally at Barnes & Noble and Books-a-Million, or online at www.ugapress.org. — Scott Jordan