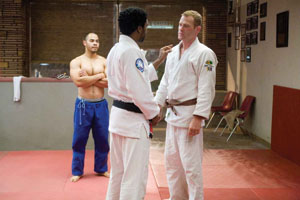 Playwright and filmmaker David Mamet holds a purple belt in jujitsu, which you might not guess from his work. Jujitsu involves deflecting the strength of your opponent’s attacks, while the conflicts in Glengarry Glen Ross and other Mamet shows resemble savage, no-holds-barred death matches. From hearing his aggressive, staccato dialogue, you’d think Mamet would have a black belt in brass knuckles and broken bottles.

In Redbelt, Mamet weds the rules and philosophy of Brazilian jujitsu to his worldview about dog-eat-dog masculine conflicts. His tenth theatrical film as a director, Redbelt offers an eloquent, engrossing and shamelessly corny update of old-fashioned kung fu film conventions.

The most memorable martial arts movies feature charismatic fighters like Bruce Lee or Jet Li, and Mamet finds a superb leading man in the undeniably magnetic Chiwetel Ejiofor. (Let’s all remember the pronunciation “chew-eh-tell edge-eh-for,” because he could be the next Denzel Washington.) Ejiofor plays Mike Terry, a Gulf War veteran and owner of a Los Angeles jujitsu school, and though the opening scene depicts two men grappling in a match, we focus more on Ejiofor’s voice than the actual bout.

I can’t speak to his actual fighting technique, but Ejiofor’s delivery of Mamet-speak is superb, and he instills macho koans such as “A man distracted is a man defeated” with more authority than they probably deserve. He’s married to a demanding, impatient wife (Alice Braga, niece of Sonia Braga) but emerges as a noble loner, with integrity so high he’d rather pay other people’s debts than his own.

Terry and his wife find themselves drawn into Chet’s inner circle, which includes perks and job offers that seem too good to be true. If you’ve seen Mamet’s intricate con-man films House of Games and The Spanish Prisoner, you’ll probably guess what’s coming before Terry does. Allen nicely plays against his regular-guy image, subtly conveying a celebrity actor’s combination of entitlement and insecurity.

Despite Terry’s disdain for competitive fighting, fate forces him into the Big Match at the end. We appreciate Mamet’s ear for legalese and behind-the-scenes prefight rituals, even as we snicker at the phoney-baloney, faux-Eastern rigmarole that accompanies the bout. Ironically, Redbelt is nearly as guilty of fetishizing the trappings of martial arts traditions as its nasty fight promoters are of exploiting it.

Mamet’s Achilles’ heel remains his treatment of female characters. His women tend to be either irrational or mercenary or both, and always untrustworthy. Terry and Laura develop a bond that’s pleasantly reminiscent of Rocky and Adrian, but you don’t forget her first impression as a jittery nutcase. When a minor character blames Terry for her husband’s death, she comes across as a money-grubbing harpy under Mamet’s direction. It’s as if Mamet’s grasp of male dynamics is inversely proportional to his understanding of women.

Redbelt comes within a hair’s breadth of completely subverting fight film clichés, only to offer a more conventional (yet still exciting) resolution. The film doesn’t attempt to match the eye-popping fight choreography of Hong Kong classics, but the fights work so well as expressions of character, especially with Ejiofor in the central role, that they prevail anyway. Redbelt proves skilled enough to perform some jujitsu on the audience, deflecting our skepticism until we yield to its satisfying melodrama.