We’ve bitten off as much as we can chew when it comes to Lafayette’s best Italian sandwiches. 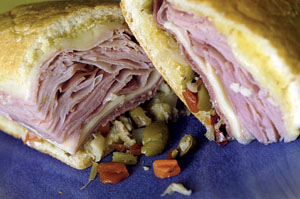 Lunch in Lafayette involves difficult choices. Between bowls of crawfish étouffée, rabbit fricassee and sausage and tasso sauce piquant, it tends to be an embarrassment of  Cajun- and Creole-inspired riches. But every once in a while, I get to hungering for an unapologetically massive mid-day meal: An oily stack of sliced Italian cold cuts, scattered with olive salad, swiped with olive oil, sandwiched between two rounds of dense, sesame-seed topped Italian bread. Yeah you rite — It’s a New Orleans classic, the Central Grocery muffaletta.

But if you can’t make it to the Crescent City, Lafayette has plenty of muffalettas — and The Independent staff embarked on a mission to find the tastiest muffalettas in town.

Before the first bite, a little history to whet your appetite. The muffaletta is a uniquely New Orleans creation, attributed by most food historians to Salvatore Lupo, a Sicilian emigrant and founder of the 1906 Italian market, Central Grocery. Part of the legend of the creation of a muffaletta is that Lupo sandwiched meats, cheese and pickled vegetables between bread rounds and billed it as a handy way to eat Palermo-style antipasti on the go.

Lupo’s descendents still run Central Grocery and define the traditional stack of imported cold cuts that make up a muffaletta as mortadella, (a fine-ground, grand-girthed pork sausage larded with rounds of white pork fat), salami, ham, and Emmentaler, (a variety of Swiss cheese). Most other muffaletta shops tend to use provolone, a milder Italian cheese. The key to the sandwich is olive salad, or giardiniera, a mixture of pitted olives, peppers, carrots, celery, cauliflower, capers, anchovies and herbs, all pickled in vinegar and oil. (Central Grocery makes their own, which they bottle and sell in the market.)

A swipe of good Sicilian olive oil contributes to the green color that seeps into the bread. Oil, salad, and meat are layered onto nine-inch rounds of dense seeded Italian bread and the whole thing is wrapped up in white paper. A sign of a good muffaletta is the oil, slicking through the wrapper. There is no tidy way to eat Central Grocery’s glorious sandwich, no way to keep the contents off your hands, chin, shirt and lap.

So the bar is pretty high when it comes to measuring up the Hub City’s sandwiches against a New Orleans icon. A few local places committed the equivalent of muffaletta murder — using mayonnaise instead of olive oil — but Lafayette’s got multiple contenders for the best ones in town.

One of the finest is a no-brainer. Cedar Deli has built a solid reputation on sandwiches with a Mediterranean flair and their muffaletta is no slouch. Fresh bread, stacked with the traditional cold cuts and a nice sharp olive salad, makes Cedar’s muffaletta a winner.

Another authentic version comes from Gambino’s Bakery, an outpost of the famous New Orleans bakery started by the Gambino family in the 1950s. With their Italian heritage, Gambino’s is a natural for making a good muffaletta. They bake the round traditional loaves on site, and make olive salad in the New Orleans shop. We didn’t detect any mortadella on this sandwich and Gambino’s puts the olive salad in the center of the layers of meat and cheese, preventing it from soaking its juices into the bread. We prefer the squash of oil and the tumble of olives out of the sandwich with every bite, but if you’re looking for a more contained, manageable muffaletta, this may be the one for you.

Monday only is the ticket at Olde Tyme Grocery, where the once-a-week muffaletta comes as a special with chips and a fountain drink. Most of the muffalettas in town come in two sizes — half or whole — a whopping round loaf nine inches across, cut in quarters. A whole will feed two very hungry people and leave you groaning after lunch. Olde Tyme only sells one size, and it’s a mini whole sandwich, bigger than a traditional half, smaller than a whole. We liked the greasy paper, we missed the mortadella, but agreed that it’s the best deal in town at $5.25 for the special.

Good meat makes a good muffaletta, and Logan Farms, which specializes in honey glazed ham, capitalizes on their expertise. The balance of cold cuts to olive salad was perfect, there was lots of oil to mop off of our chins, and Logan Farms has its bread down pat. It was our favorite muffaletta in town in part because of how they handled their bread. The bread was warmed in the oven, something non-traditional to Central Grocery’s style, but not a deal breaker. Heating it before the sandwich was made left the meat, cheese and olive salad at room temperature; this makes all the difference.

One thing we noticed about Lafayette’s sandwich-making style: nearly every muffaletta arrived warm. Not that we mind toasted bread; the Italian panini is one of our favorite types of sandwiches. But Central Grocery’s muffaletta is made to stand up to room temperature conditions and hold its own. That’s the nicety of that dense, bland Italian bread designed to sop up the olive oil without falling to pieces. The sliced deli meats bloom with flavor at room temperature, served as they have been for 100 years. But heat up a slice of mortadella and it loses its surface tension as the larded fat begins to sweat and ooze. Melt the cheese and the gooey richness overwhelms the balance between the sharp olive salad, the fruity oil and the solid core of cold cuts in the center of the sandwich.

There’s one more terrific muffaletta in town — just don’t breathe the word muffaletta at the Italian Market. Nonchalantly ask for a panini with mortadella, ham, salami, aged provolone and olive salad. Add that you don’t want it heated on the griddle. If you goof and speak the forbidden word, the market’s Sicilian owner, Maurizio Principato, will tell you he doesn’t make them. “Don’t ask me for a muffaletta,” he grumbles. “You come here, I make you a panini. Muffaletta — that’s not from Sicily.”
**
PRIME MUFFULETTA OUTPOSTS**