“We’re here to get comments. We can’t say if it can change,” Stantec associate Gary Heitman told Bruce Conque, whom Heitman probably didn’t realize was a newly elected Lafayette City-Parish councilman. Conque, flying incognito in a breakout seminar of the state Department of Transportation and Development’s Jan. 23 Vision and Values Workshop at the Progressive Outreach Center, had asked if the land gobbling interchanges planned for the I-49 Connector’s crossings at Second/Third Street and Johnston Street could instead be slip lanes or half-interchanges, thereby reducing physical impact and integrating more harmoniously with the surrounding neighborhoods. The Second Street interchange, as currently designed, would reportedly consume 32 acres of land and impose 2,100 feet of concrete morass for pedestrians to cross.

While Heitman didn’t exactly dismiss Conque’s idea, his terse response stopped the momentary diversion of his “Path To Progress” presentation, an overview of the Connector’s snaking alignment, and returned the proceedings to script. Thirty minutes is not a lot of time to explain a divisive highway project to a room full of leering skeptics. He resumed the monotone of his presentation, slowly gesturing to the bends, heights and intersections of the proposed freeway from its starting point at I-10 to its terminus by the Lafayette Regional Airport.

The workshop’s three brisk seminars, run by professionals associated with DOTD-contracted consultants Stantec and AECOM, were among the most intimate interactions between the public and the Connector’s shepherds to date. But the presentations and input exercises imposed a rigidity to the curriculum that left attendees, many of whom walked in expecting to be disappointed, unconvinced that this was more than show and tell.

Billed as a public input session, attendees often seemed too busy learning to formulate substantive questions that would generate the sort of existential data the words “vision” and “value” conjure. It was in that same “Pathway” workshop that Conque, and several others around him, heard for the first time of a neargrade earthen berm set to straddle the Jefferson Street underpass with 11 feet of compacted dirt.

The structure gave him, and others in his rotating break-out group, considerable pause. Prior to the workshop, Conque’s concept of the Connector’s basic urban overlay was a highway elevated from Taft Street to Willow Street. That a barrier — or a “nice retaining wall” as Heitman put it — would separate Downtown from the neighborhoods east of the Connector’s Evangeline Thruway alignment negates the potential connectivity that DOTD and its private contractors have touted as one of the project’s major benefits. “If you have a berm at the point, you’re effectively separating the Downtown area from the neighborhood across the track,” Conque told The Independent in a phone interview. “I thought this was about connecting Downtown with that area.”

That berm sparked a brief roundtable of Connector engineers and concerned citizens, who were otherwise distracted affixing sticky notes with their thoughts to a map of the Connector’s alignment.

“I was concerned about dividing the community in the first place,” longtime Connector opponent Sally Donlon told us at the workshop. “I noticed in the pictures of [elevated freeways in] Austin they cleared out the homeless people for the pictures underneath. This [retaining wall] is stunning. This could be a wall for three blocks where people can’t even see each other.”

In a breakout session covering the history of the Connector’s environmental studies, erstwhile students were asked to prioritize mitigation commitments enshrined in the project’s 2003 Record of Decision. Check the green box if you think water quality is “most important,” check the red one if you think signage is “least important,” and so on. Not surprisingly, analysis of that input by the Connector team later showed that folks ranked protecting the Chicot Aquifer, Lafayette’s source of drinking water, as the most important commitment in the Record of Decision.

A seminar on bridge design showed pictures of crawfish or accordion-inspired bridge pylons designed by an eminent architect from the United Kingdom. (Data collected showed folks really didn’t like those options.) What was ostensibly a presentation of design elements for a so-called “signature bridge” concept included slide after slide of cable-stayed bridges soaring over water with gaps 10 feet and greater between spans. Meanwhile, the bridge, as currently conceived, sits 22 feet above land with a gap of 1.5 feet between spans to accommodate six lanes of traffic.

The three-hour summit culminated with all 200 some-odd attendees reconvening in the main hall to participate in a “Placemaking” visual preference survey of design elements. Towering screens flashed design options for multimodal transportation, intersections, lighting, pedestrian traffic integration and public art, among other constituent design elements. Participants were instructed to vote their preference on a five-point scale via smart phone or paper ballot.

Many openly questioned the use of such an exercise. Others were confused if they were voting for adding the elements depicted to the Connector’s design, or simply indicating general preference. It’s the difference between saying, “I would like to add a bike lane to the Connector” and “I like bikes.”

Still others saw no connection between what was shown and what they understood to be possible in Lafayette.

“What was given to me as a choice just simply does not fit the neighborhood that I know,” Freetown resident Marcella Peron told The IND, refering to the various slides she saw in the exercise, particularly those of bridges over water. “I learned that they’re more full of shit than I thought.”

A basic mistrust has dogged the Connector since the studies for the project’s Environmental Impact Statement began in the late 1980s. Following a Sierra Clubsponsored forum in December, which condensed that cloud into a punch in the nose, the Connector partners announced that five more months of outreach would be added to the $21 million, 18-month Context Sensitive Solutions schedule. Officials with DOTD have not confirmed if the schedule change has altered the scope or length of their consultants’ contracts, but it’s a good bet that more time will mean more money spent. 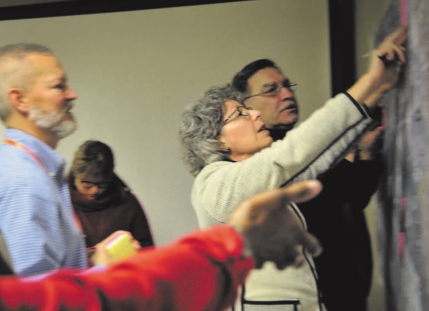 Some of what DOTD and its partners need to suss out, at least in terms of public messaging, is how to convey the range of flexibility in the Connector’s most fundamental design elements. At a Community Work Group meeting a few days after the workshop, John McNamara, vice president for DOTD consultant AECOM, left the possibility of removing or redesigning interchanges decidedly on the table. The priority of that future discussion was generated from feedback data collected at the workshop.

No doubt had Stantec’s Hetiman felt able to supply that answer to Conque at the earlier workshop, the exchange would have sent a different message to the councilman and the public around him.

McNamara spoke at length at the Community Work Group meeting of the need for the Connector to “stitch neighborhoods back together,” a laudable and culturally sensitive goal. But candor like that has yet to be on display in larger, more hostile public events. While the workshop proved valuable as an informational tool, attendees still walked away feeling stonewalled and faced with the Connector as an inevitability. Much of that was due to the rigidity of the workshop’s agenda.

With only 54 percent of attendees reportedly satisfied with the workshop according to DOTD’s data, the Connector team has a long way to go to convince the public of its good intentions. When people walk into a room expecting to get railroaded and see tracks, it’s hard to convince them a train isn’t coming.

DOTD will host more public workshops later in the year. In the meantime, meetings of the Community Work Group and the Technical Advisory Committee are open to public observation and take place roughly once a month. You can find a schedule of events by visiting lafayetteconnector.com.

Click here to see more photos from the workshop.