Simple, clean design is alive and well in Lafayette. The submissions for the 2016 INDesign Awards were a collection of eclectic homes and projects — from a West Indies-inspired residence on the river to a revamped French country family home in Fernewood. Outdoor spaces of every variety were woven throughout the submissions, with winners garnering praise for the balance of bringing the interior and exterior together in a way that makes the inside more open and the outside more livable every day.

Our panel of judges honored three projects with Gold awards in architecture and design, and one home won Gold for interior design. Beth Miller, an interior designer and professor at Mississippi State University’s College of Architecture, Art and Design, returned for the 11th consecutive year to judge the homes’ interiors. Eddie Cazayoux, former director of UL Lafayette’s School of Architecture & Design and the winner of the UL College of the Arts’ SPARK Lifetime Achievement Award last year, led a team of local architects and professors who judged the architecture of the projects. On April 6 at 11:30 a.m. at The City Club of Lafayette, Gold, Bronze and Silver winners will be honored at the INDesign Awards’ annual luncheon. 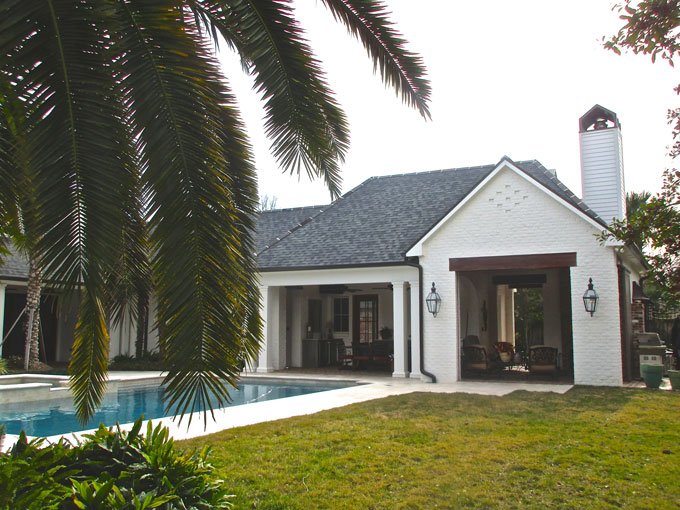 Exterior changes with big impact
We may not judge a book by a cover. But we certainly judge houses just that way. The exterior of a home gives a clear indication of what’s to come on the interior. And this is why when the Brauns bought a 1980s home in Fernewood on Llansfair Drive, they went to work on the outside.

“The house was built in the ’80s. It’s more traditional French country, and they bought it because of the location. But, they needed more space and they wanted to freshen it up,” says architect Gil Zaunbrecher.

The family home revamp began on the front exterior with replaced windows and new dormers; arches were torn down.

The interior was changed only slightly to produce a significant difference with the addition of windows, which opened the inside to the outside.

“We changed it without that many changes. A couple of improvements changed it completely,” Zaunbrecher says. “It feels larger and connects you with the exterior with these almost floor-to-ceiling windows.”

The outdoor expansion includes a new living space with a pizza oven, retractable screen and a full kitchen. The pool got a facelift, and inside the master bedroom was slightly rearranged. 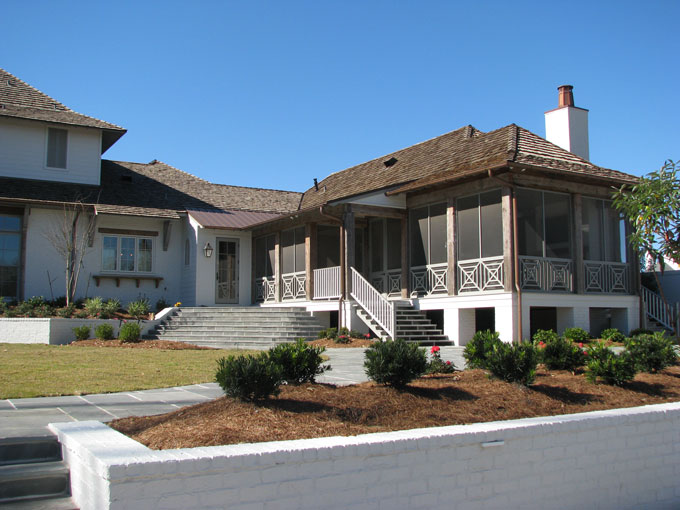 The West Indies have arrived in Lafayette. When architect Natalie Fraychineaud was tasked with creating a beautiful living space on Elysian Fields for a family of six on a lot on the Vermilion River, she looked abroad for inspiration.

“The home needed to accommodate children ages 3 to 10,” Fraychineaud says. “They wanted nice, clean, crisp design and they liked a coastal look.”

The result is an all white house with Bahama shutters. They focused much on the backyard and the river view.

“They love outdoor living,” Fraychineaud says. “They have a great screen porch in the back on the river, and that’s where everything came from.”

The other task — a marriage of a new aesthetic with an old one.

“They wanted a new house that felt like an old New Orleans house inside,” she says.

The result — high ceilings, a few antique wood features like old wood floors and beams. The brick used is recycled and painted to get a nice, clean all-white finish with a bit of color accent on the outside — a subtle smoky blue.

“The large master bedroom and study has a double-side fireplace adjoining them and a nice extra room, which is like a family room,” Fraychineaud says.

The family room was essential for the family’s vision — a place for them to do homework or arts and crafts and spend time together. The main spaces all have large picture windows to the backyard and to the river.

“We took the entire width of the lot so we could get as many spaces overlooking the river as possible,” the architect says. 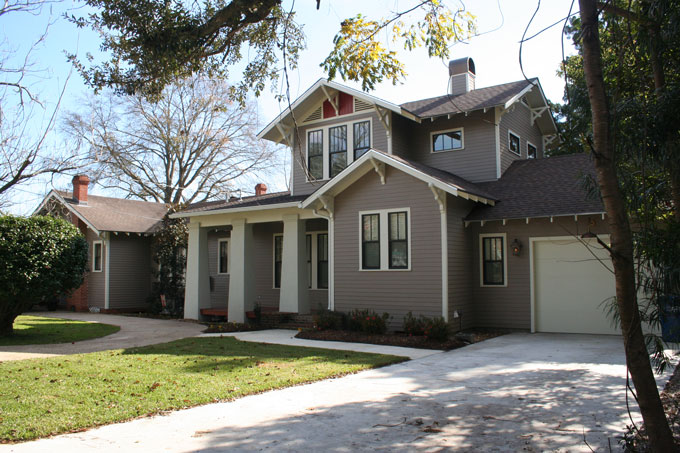 It started with the laundry room. It ended with a living room, porches, bedroom and bathroom. The addition to the Poche home on Azalea in the Saint Streets was a blend of old and new with architect Gil Zaunbrecher and his wife Tanya at the helm.

“It started out with a laundry room, and then it snowballed,” Gil says.

The snowball of the addition was a balance to maintain the vibe of the home built in the 1920s while giving it a fresh look. Located on the corner of Myrtle Place and Azalea Street on a lot that is a sort of peninsula shape, the Poche home is situated ideally for unique outdoor/indoor living spaces.

“We wanted the exterior to blend seamlessly with the era of the 1920s, but then on the inside we wanted to freshen it up,” Gil says.

The focal point of interest came with the stairs that double as the library.

“It’s almost a showpiece. It wraps around the fireplace and gives access to [the homeowner’s] artwork and library at the same time. It’s probably my favorite part,” Gil says.

Two porches were added. One faces down Myrtle, and the other is a back porch on the other side of the home. The informal living area is perfect for entertaining, which is a priority for the couple, who are also dog lovers. 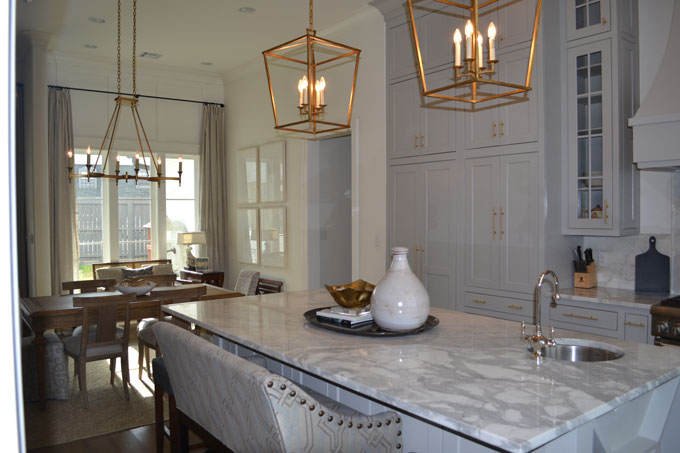 A home for work and play

Work and play. Professional life and family life. They all met in the Jenkins’ residence thanks to Kally Seré and homeowner (and designer) Brianne Jenkins. Seré of Kally Seré Designs handling architectural design and Jenkins of Grayson Carter Design handling interior design balanced the needs of a couple with three children and the beauty of a transitional home with fresh white details.

At just under 4,000 square feet, the home on Huntingtown Lane in Walker’s Lake Subdivision is filled with architectural details and functional components from a large walk-in pantry hiding within the cabinetry to a side hall that includes a playroom.

“The front view was inspired by a home in an urban setting the Jenkins’ visited on vacation,” Seré says.

She took this aesthetic and expanded it throughout the home to include a plan that allows Jenkins to work from home as well as enjoy extras like a gift wrap room. The home has both private and open areas that work for the bustling family to both enjoy time together as well as work for Jenkins. The floor plan flows in a way that makes entertaining easy by opening from the inside to the outside with ease.

“Every square foot of this home was thought-out from a functional stand point as well as aesthetically,” Seré says.

The luncheon program will feature a comprehensive panel discussion of the I-49 Connector at a critical stage in the planning process.

The 12th annual INDesign Awards Luncheon is slated for Wednesday, April 6, at 11:30 a.m. at The City Club of Lafayette. The event is produced each year by IND Media to recognize excellence in architecture, interior design, historic preservation and urban planning in Lafayette and throughout the One Acadiana region. The INDesign Awards is a juried competition, judged by respected professionals in architecture and interior design, and participation this year was near an all-time high.

Van Eaton & Romero has been a legacy sponsor of this event since its inception. Founded in 1977, the firm is a top performer in commercial real estate and has been No. 1 in the local market in residential transactions for 36 straight years. Southern Lifestyle Development, developers of the nationally acclaimed Village at River Ranch, also has a long sponsor relationship with The INDesign Awards and returns to the sponsor roster again this year. Committed to building livable communities that offer features like walkability, recreational facilities, open spaces and mixed use options, SLD currently has 17 projects at various stages of development throughout Louisiana.

A full gallery of all winning entries, including detailed photographs of design features, is available online at theind.com and sponsored by Doug Ashy Building Materials. Serving Acadiana’s building professionals for over half a century, Doug Ashy has six locations in the region.

The annual luncheon is designed to bring recognition to the importance of great design and the contribution it makes to the overall quality of life in Acadiana, especially as our region evolves to compete in a 21st century economy. Winners in the residential division for 2016 include Zaunbrecher Design, NMF Architecture, Trahan Architecture Planning, Grayson Carter Design, NMF Architecture, db Architecture of Acadiana, April Hanks Guillory and Charles Seale Design. Winners in the commercial division will be announced in the March 15 issue of ABiz in print and online at acadianabusiness.com.

This year’s program will address the most important project that will impact Lafayette in the coming decade at a critical phase of the decision-making process: the I-49 Connector. Representatives of the lead agencies will be represented, including the Louisiana Department of Transportation, Lafayette Consolidated Government, the Metropolitan Planning Organization and Stantec, which is the I-49 Connector consulting team. The format will be an interactive Q&A.

Tickets are $45 per person or $395 for a reserved table of eight. For more information or to make reservations, contact Robin Hebert Guidry at (337) 769-8620 or via email at [email protected].