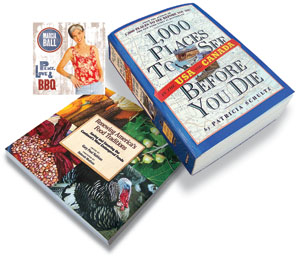 RARE SPECIES FOR SUPPER
It may seem counterproductive to suggest eating an endangered species in order to protect it, but that’s the premise of a new book by Gary Paul Nabhan and Deborah Madison. The pair have just published Renewing America’s Food Traditions: Saving and Savoring the Continent’s Most Endangered Foods, asking thoughtful eaters to do just that. They divide the country into the food nations of North America (bison, wild rice, maple syrup, clambake, cornbread) and of course gumbo nation — that’s us. Within each section is a catalogue of rare and endangered species such as the Centennial Pecan, propagated and nearly lost at Live Oak Plantation; and Pineywoods Cattle, descendants of 16th century Spanish cattle that were once ubiquitous to deep south homesteads. Bringing a species back from the brink requires more than creating a living museum — Nabham and Madison suggest market-driven economies for propagating species with distinct American heritages. Louisiana star chef John Besh is taking up the torch; he serves Pineywood beef at his New Orleans area restaurants when it’s available. Renewing America’s Food Traditions retails for $35. — Mary Tutwiler

BALL PREACHES PEACE, LOVE & BBQ
Beloved Gulf Coast musical icon Marcia Ball told The Independent last year that she hit a creative block after the 2005 hurricanes, but now she’s back with Peace, Love & BBQ, her first album of new material since 2002. The album opens on an odd note — covering Bobby Charles’ “New Orleans is a Party Town” feels strange post-Katrina — but Ball hits her groove for the rest of the album. The title track (plucked from the David Egan songbook) embodies Ball’s soulful worldview, and a slew of special guests including Dr. John, Terrance Simien, legendary keyboardist Ian Mclagan, lap-steel guitarist Cindy Cashdollar and veteran Austin six-stringer Stephen Bruton bring their talents along for the ride. Like most Ball albums, the end result is a solid effort that mixes New Orleans piano rhythms with doses of soul, gospel and Texas R&B. Peace, Love & BBQ is available at Barnes & Noble, Circuit City and Best Buy, or online at alligator.com. — Scott Jordan
**
LOCAL PLACES TO SEE BEFORE YOU DIE**
Patricia Schultz, whose 1,000 Places to See Before You Die became a New York Times bestseller, has just published a companion travel book, 1,000 Places to See Before You Die in the USA and Canada. This time Schultz, executive producer of the Travel Channel’s show based on her popular book, adds several local favorites to the 150-plus entries in the United States and Canada that appeared in the original version. “My own energies and curiosity were telling me there was an encore waiting in the wings: It was time to turn my international attentions home,” Schultz writes in the introduction. Making the cut were Eunice, “where Cajun and zydeco music rule”; New Iberia, “the Spanish jewel of Acadiana”; St. Martinville and Breaux Bridge, “the birthplace of Cajun culture”; and Lafayette’s Acadian Cultural Center and Vermilionville, “the epicenter of Cajun heritage.” The book retails for $19.95 and is available at local bookstores. — Leslie Turk