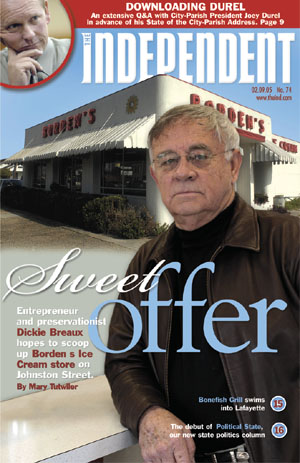 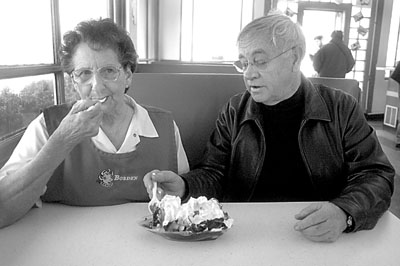 Restaurateur Dickie Breaux drives several times a week from his Breaux Bridge restaurant Café des Amis to work off an excess of white chocolate bread pudding at Red Lerille's gym. Traveling Johnston Street recently, the sight of Borden's Ice Cream store and its mostly empty parking jolted Breaux out of his usual routine. "I hadn't been there in ages," Breaux says, "and I thought it had closed."

A former state legislator from Jeanerette, Breaux is an entrepreneur in historic restoration. He has rehabilitated many buildings now on the National Register of Historic Places, including Café des Amis, the popular eatery he owns with his ex-wife, Cynthia. He was also involved in the restoration of the old Evangeline Hotel in downtown Lafayette and New Iberia High School (now called School Days), as well as major rehab projects in Hammond and Shreveport.

Borden's, it turned out, was open for business as usual, but Breaux asked attorney Floyd LeBleu to inquire if the business might be for sale. By the next day LeBleu was tracking Breaux down at Red's; Borden's was interested.

Breaux's proposal interests Borden's manager Wayne Tucker for two reasons. While the ice-cream store has nostalgic value for Lafayette, Borden's is no longer in the retail business and the landmark shop had become a white elephant of sorts. But what really piqued Tucker's interest is Breaux's reputation for restoring and infusing life into historic properties.

"It's important to the community to maintain the image and Borden name," says Tucker. "Borden's is not something I would turn over to just anyone."

The Borden company was established after Gail Borden received a patent for condensing milk in 1856, and became the largest dairy company in the world. Borden's plants were located all across the country, and every production plant was complemented by a retail ice cream store. Louisiana had stores in New Orleans, Baton Rouge, Lake Charles and Lafayette, where the Johnston Street ice cream store opened in 1940.

Banana splits, malts, ice cream cones and cups were the mainstay of the business. Former Borden's manager John Luby, who started his career at Borden's in 1953 loading milk trucks, says Borden's Ice Cream store has always been an integral part of the Lafayette community.

"We put a lot of kids through college working in that store," he remembers. "A lot of marriages got started there where couples met on a date. People tell me all the time, 'Don't close down that store, that's where I proposed.'"

In the '70s, the company closed the Baton Rouge retail store as part of a national push to focus on wholesaling its milk products. The Lake Charles location was shuttered in 1985 and New Orleans followed in 1989. Today, the Lafayette Borden's is the last remaining Borden's Ice Cream store in the United States.

Putting a price on that type of history is difficult. Charlie Gardner of Sam Robertson Real Estate says, "The only thing of value is the property. I would say it would be worth about $5 or $6 a square foot." Breaux estimates the property is approximately 17,000 square feet. With those benchmarks, a starting bid ' not taking into account the building and its heritage ' would cost approximately $100,000.

According to Tucker, the real value of the Borden's Ice Cream store comes from its landmark status and location. Tucker says Borden's and Breaux would be partners "via our name, our image and our commitment to remain in Lafayette."

While Borden's owns the corporate trade name, the UL Foundation owns the property and building. Breaux submitted a proposal to buy the property to the Foundation last week. UL Foundation Executive Director Julie Falgout says the terms of the proposal are confidential, but says that she is excited about the concept. "We've always been very sensitive to Borden's being a historic landmark," Falgout says. The Foundation has received offers in the past from parties interested in the site, but none of the previous potential buyers wanted to retain the historic character of Borden's. "It will bridge the connection between the University and downtown. We're all for it," Falgout says.

With negotiations ongoing, Breaux is conceptualizing how the old ice cream shop can fit into the nexus of downtown Lafayette. Putting Borden's on the National Register of Historic Places will protect the distinctive Deco architecture. Breaux's next concern is generating enough business to cover his investment. The ice cream business might boom in summer months, but according to Luby, winters are tough economically.

"The first thing I did was to visit Dearman's in Baton Rouge," Breaux says. Dearman's Diner & Soda Fountain, a landmark store in Bocage shopping center, was slated to close before entrepreneur William Wright bought the business. "I've eaten there a number of times," Breaux says, "so I walked in, introduced myself, and said I have one question. 'If you had this to do all over again, would you do it?' He said absolutely. I told him about Borden's and he got excited ' he actually went to take a look at it."

From Dearman's Breaux plans to borrow the idea of adding burgers and French fries. (Previous attempts to diversify the menu at Borden's failed in the '80s and '90s.) He will exclusively use Borden's products for the ice cream counter. The spinning stools at the counter should make a comeback, and the interior will take a step back in time to the gleaming days of the atomic age. The centerpiece of Lafayette's Borden's, however, is neither a signature fountain soda nor the famous Elsie logo. For more than 40 years, Borden's employee Ella Meaux has manned the counter at Borden's scooping out chocolate, vanilla and strawberry for Borden's famous banana splits.

Meaux started working at the store on April 25, 1961. At the time, ice cream was five cents a scoop and an ice cream sundae cost 29 cents. "People come here and they can't imagine the place without me being here," she says. For 43 years, Meaux has represented the old-fashioned values of a different era. "It's a policy with me, even if a child comes in here and they have a few pennies or nickels missing, they don't leave without an ice cream cone," says Meaux.

Borden's has guaranteed Meaux's retirement and insurance, and offered her a corporate position if the sale goes through. "They've offered me an office on Bertrand, but I'll stay and help out for the first six months," she says. But it sounds like any restructuring won't keep her away from Borden's Ice Cream store for too long. "I can always be borrowed," she says.

At press time, the UL Foundation had countered Breaux's initial offer. Will Borden's close if this deal falls through? "Absolutely not," Tucker says. "Either Dickie and I are going to be partners in managing this historical site, or we're going to keep on running it ourselves."