His work belongs to the world, but for the Begneaud family of Lafayette, Robert Rauschenberg was a brother and Uncle Bob. 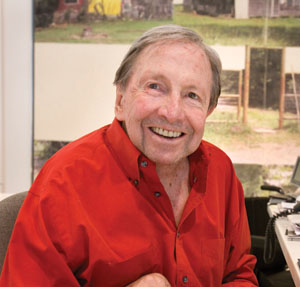 Robert Rauschenberg’s family is gathered on Captiva Island, Fla., this week, spending time in the spaces where the international star of the art world lived and worked. Relatively few people were aware that his late mother, Dora Rauschenberg, moved to Lafayette in 1945, and his sister, Janet Begneaud, a Realtor, continues to live here in town. A major Rauschenberg exhibit at the Paul and Lulu Hilliard University Art Museum in 2005 raised awareness of the artist in Lafayette, but it has taken the torrent of stories in newspapers spanning the globe since the 82-year-old’s death on May 12 to reawaken this community’s connection to the artist.

Rauschenberg was 76 in 2001 when he suffered a stroke that paralyzed his right side. Nonetheless, he kept up his prolific pace until about six weeks ago, when he was hospitalized in Washington, D.C., with lung and heart complications. He was flown down to the hospital in Fort Myers, Fla., where his doctors and friends were close by. “He just couldn’t get well,” says Begneaud, her voice breaking. “What’s so sad is that he had this tremendous spirit and an unbelievably working mind, but a body that just wouldn’t cooperate.”

Janet’s son, Rick Begneaud, was very close to his uncle. Rick spent summers on the island in the company of Rauschenberg’s friends like Andy Warhol and Roy Lichtenstein, and toured the globe with him from China to Mexico. Two weeks ago, Rick flew to Captiva to help his uncle once he got home from the hospital; neither he nor his mother realized the gravity of the illness. “He’s gone now, but there’s still projects that he started that they’re working on right now,” says Rick of the atelier on Captiva. “It’s still hard to wrap my head around it.”

Rauschenberg is one of the art giants of the 20th century. Inventive, playful and wholly original, he changed how many people saw the world. After graduating from Cecilia High School in 1956, Lafayette musician and artist Dickie Landry was reading a copy of Time magazine in the public library. He’d never heard of Rauschenberg and saw a photo of his 1955 combine Bed, where Rauschenberg mounted a pillow, sheets and a worn quilt on wooded supports, scribbled on them with a pencil and splashed them with paint. “Something clicked in my head,” says Landry. “I said if that man can paint his bed and put it on the wall in a museum, and also win the prestigious Venice Biennale, I was free to do anything I wanted to do. So that put me on the course I’m on today, and I’ll stay there until I go.” Landry moved to New York City and worked with modern classical composer John Cage, who was a friend of Rauschenberg’s. In 1969, Landry had the opportunity to meet Rauschenberg. “I told him that story,” says Landry. “We’ve been friends ever since.”

The friendship turned into an artistic collaboration. Rauschenberg used his international fame to instigate a global art project designed to communicate human kinship through the language of art. Launched in 1984, the Rauschenberg Overseas Cultural Interchange (also named for his 24-year old turtle “Rocky”) traveled into villages in China, India, Mexico, Tibet, Chile and Sri Lanka and used what was at hand — mud, straw, fabric — to create works of art. Photographs and video both documented the work and became part of the piece. The works of art would then go on to the next destination, culminating with openings celebrated by the world’s poets and musicians. “Bob and I collaborated on a number of things,” he says. “But he always let me do what I wanted to do. I’d open the shows with my saxophone solos. In Mexico, Cuba, Russia, he’d say, ‘Do whatever makes you feel good.’”

Cuba was a fascinating trip for all those involved. “We flew in on a private plane in the middle of the night,” recalls Janet, who accompanied her brother whenever she could. “It was the late 1980s. Bob had to fly his art to Denmark, then they flew it into Havana. We had a talk with Fidel. I thought he was a very nice man. And when Dickie played, he was on a rooftop. You could hear the music flowing down into the castle, where the show was.”

Fame never upstaged Rauschenberg’s family. “The first thing that Bob was, was my brother,” says Janet. “My dad died back in 1963. He included me and my mother in the big shows. And he would introduce us. He’d say, ‘Here’s my little mama, isn’t she pretty?’ They were expecting him to say something profound, but to him that was profound.”

Watch a preview of A Conversation with the Artists,

Herman Mhire, the former director of the Paul and Lulu Hilliard Art Museum, recounts a story the late artist Elemore Morgan Jr. told him. Morgan, then new on the UL faculty, was teaching a night course for people in the community. During the course of the semester, one of his students, a middle-aged woman, raised her hand and announced that her son was an artist. “Elemore says, ‘Oh really? Who’s your son?’ Maybe he hadn’t paid attention to Mrs. Rauschenberg’s name. And she says, ‘My son is Bob Rauschenberg.’ It took five minutes for Elemore to get up off the floor. I don’t think anyone in the art department had a clue that the Bob Rauschenberg had a connection to Lafayette.”

Art professor Fred Daspit arranged for a small show in 1967; Rauschenberg attended the opening. But for the most part, he came into town for his mother’s birthday every year, under the radar. During Rauschenberg’s childhood, the family was of very modest means. His mother made all of his clothes. In the 1970s he created a series of works of prints on layered silk titled Hoarfrost, to be shown at the Leo Castelli Gallery in New York. He wound up shipping the whole series to his mother to make buttonholes in the top of the panels so they could be hung without damaging the silk. “I was impressed by the level of her commitment,” Mhire says of Dora Rauschenberg. “While she didn’t fully understand the content of the work, he was her son and she would do anything for him.”

Rick Begneaud says Rauschenberg made a little bit of art here in Lafayette; he constructed a cardboard piece in the mid-70s and nailed it to the wall of Janet and Byron Begneaud’s house. “My dad was totally freaked out,” says Rick. “It was cardboard boxes, with Lloyd Titi Comeaux or something like that written over three or four boxes. And that stayed in the living room for eight years, and they’d kind of joke about it. Nobody understood it. It got moved back into my room and it stayed there for a couple of years. Finally my dad said, ‘Take that thing out of here — go put it out by the street or sell it or something.’”

Rick called his uncle, who told him he had a buyer and to bring the piece down to Captiva Island. “I think Bob gave me $12,000 for it,” says Rick. “And this is like in the early 1980s. In 1995 when they had the big Guggenheim retrospective in New York, I was walking through the Guggenheim and there is that piece [from the Cardbird series] on the wall.”

A photo of Janet, crowned as the Yambilee Queen of 1949, is an image that shows up over and over in different pieces. Another local image is Janet holding a 6-month-old Rick in her arms, as well as photos of Janet and Byron and Dora, collaged into the works. “He drew from everything, but certainly there was some family stuff mixed in,” says Rick.

“Doing anything with him was a kick in the britches,” says Janet. “It was so fun. Bob felt like you weren’t put here to be sad. You were put here to work and be happy.” Rick reiterates what voices from all over the world have been saying — Robert Rauschenberg changed lives. “I’ve traveled many, many different roads because of Bob,” says Rick. “Every day in my life I know I think in a different way than I would have normally, and that’s because of Bob, hanging out with him all those years, traveling with him, getting my mind blown by him on a daily basis.”

Adds Janet, “He always wanted to be something new and different. It wasn’t to sell art. It was always new horizons.”