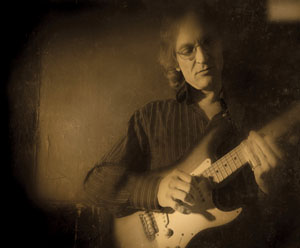 It starts with an insistent high-pitched echoing reverb from Sonny Landreth’s guitar, sounding like sonar from a rescue ship. The growled lyrics then reference Air Force One, “cracks in the ceiling and the system too,” a levee of lies and a twist on Bobby Charles’ “Walking To New Orleans.” Most chillingly, Landreth momentarily suspends his churning, high-octane solo exchanges with Mark Knopfler before the final verse, with his hushed plea to “throw me something, mister” evoking the most desperate scenes in the Crescent City post-Katrina.

“Blue Tarp Blues,” the first song of Breaux Bridge guitar icon Landreth’s new CD, From the Reach, is a masterpiece that ranks with the subdudes’ “Poor Man’s Paradise” as the most expertly crafted and affecting Katrina-related song. Followed by a soulful and blistering call-and-response six-string duel with Eric Clapton on the funky jaunt of “When I Still Had You,” it’s a visceral one-two punch to kick off a project that finds fellow high-profile Landreth fans and supporters Vince Gill, Dr. John, Eric Johnson and Robben Ford also climbing on board. (Clapton also appears on the stone blues of “Storm of Worry.”) The opening salvos featuring Knopfler and Slowhand are hard to top, and the Dr. John track “Howlin Moon” is a disappointment, as Rebennack’s piano and Jimmy Buffett’s vocals are mixed so low into the track that they’re virtually indistinguishable. But the presence of superstar guests should help Landreth expand his fanbase, and longtime Landreth devotees will savor new compositions like the pedal-to-the-metal instrumental “Uberesso.”

It’s also Landreth’s first album for his newly launched record label, Landfall Records. From the Reach’s release comes as Landreth embarks for a full slate of tour dates, and he’s just been voted Best Slide Guitar Player by Guitar Player magazine readers. For Landreth, it sounds like it’s going to be a pretty rocking summer.
_
From the Reach_ is available directly from sonnylandreth.com.