A series of proposed high-rise, mixed-use developments could result in a development boon for downtown Lafayette. 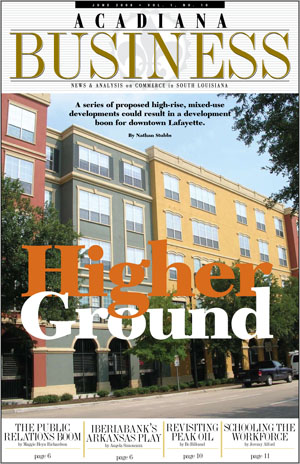 Available: 1.8 acres of prime downtown real estate on the corner of Jefferson and Main streets. Seeking developers interested in constructing a mixed-use facility of commercial and residential space. Government assistance may be available for property purchase.

An ad similar to this could soon be sent out to both local and national developers. The old federal courthouse, at 705 Jefferson St., is being eyed as prime real estate — and will likely end up being as one of a string of proposed developments promising to reshape downtown. City-parish officials are currently working on a plan to demolish the old courthouse, likely along with two other aging adjacent structures — the Acadiana Open Channel building on the corner of Main and Lee streets and the old police building on Jefferson Street — to clear the site for construction of a new high-rise mixed-use development.

Officials caution that plans aren’t finalized but suggest that it’s only a matter of how and when the property will be redeveloped.  “It’s got opportunity written all over it,” says Downtown Development Authority Director Cathy Webre, citing the property’s prized location and the fact that Lafayette Consolidated Government owns all three buildings as key advantages. Webre says the desire is to develop a multi-story, mixed-use facility with significant residential space, as well as some commercial. From LCG’s perspective, Chief Administrative Officer Dee Stanley says the property’s value is currently going to waste. “You have a showcase corner in downtown Lafayette,” he says, “the corner of Jefferson and Main, just short of 2 acres worth of property in the core of downtown that continues to sit in decay. We need to get together in a partnership either public-public or public-private to do something with that corner.”

The issue is a priority for city-parish government. Last November, the city-parish council unanimously passed a resolution calling on the administration to develop plans for reuse of the site, including possible renovation or demolition of the building. Both Stanley and Webre say that there is little to no interest in renovating the old courthouse — the deteriorating white brick building holds modest value — but the site itself is very valuable. “There has been much interest in the real estate community and the development community for that site,” Stanley says.

Local architect Steve Oubre, of River Ranch fame, has been working pro-bono with city officials, advising them on how they might proceed with redevelopment plans. Oubre has advised that LCG hire a professional consultant to put together a Request For Qualifications to send out to developers. Different from the more standard Request For Proposals, when a public agency puts out an RFQ, it broadly defines the type of development and looks for potential developers based on their experience, technical expertise and financing abilities. City-parish officials can then work with a selected developer to iron out plans for the site, or offer the property to developers at a reduced rate in order to help encourage development. Oubre has helped show LCG officials how having a professional consultant handle the RFQ helps ensure a quality pool of applicants.

“He’s shown us why it’s important that you use people who do this for a living,” Stanley says, “because then you get companies or investment groups who are serious players involved in your community.”

“If we are going to ask viable developers to invest their time and money into what’s going to be a multimillion dollar project downtown,” Stanley continues, “then the RFQ needs to reflect that as well. What we’re doing now is looking at some prospective consultants, people who have done this type of work in other cities, in hopes of engaging them.”

The Lafayette Economic Development Authority also could play a major role in the project. One of the possibilities being discussed is that LCG could deed all three of its buildings along the Jefferson/Main Street corner to LEDA, which could then fund demolition of the buildings as part of an economic development project to set up a new development.

According to LEDA President and CEO Gregg Gothreaux, LEDA hasn’t decided what role, if any, it will take, but the agency is interested in helping facilitate such a project. “I believe from LEDA’s perspective that we are ready to be involved,” Gothreaux says, “but we’re still going to have to define what that means.”

“LEDA and DDA are both keenly interested in seeing this project happen,” Gothreaux adds, “and seeing it happen in the right way. The use of that property in a fashion that would bring a major development to downtown could have a fantastic effect, a major impact on the revitalization that’s been going on over the last 20 years of downtown and have a major impact on the community.”

Ed Bowie, executive director of Acadiana Open Channel, is already working with LEDA and LCG in anticipation that the public access station’s current building at 124 E. Main St. will be torn down and AOC will soon need to relocate.

“They’ve been looking to redevelop this property for a while now,” Bowie says, noting that the building was slated to be torn down if the property tax proposal for a new parish courthouse passed in 2006. “They’re looking to get higher return on this property than AOC can provide in this beat-up old building,” Bowie says. Bowie maintains that he and AOC hope to stay in the downtown area.

Bringing in new mixed-use developments with residential components, a la River Ranch, has long been a goal of both the city and DDA. Webre says that a sizeable downtown residential base would help encourage further infill development, bolster existing businesses and curb crime. A 2006 study commissioned by DDA concluded there was a “pent-up demand” for housing in downtown Lafayette, especially among young singles and empty nesters.

Richard Baron, chairman and CEO of McCormack Baron Salazar, a St. Louis, Mo., firm specializing in large-scale redevelopment projects in central city locations, is involved in several downtown revitalization projects across the country. Baron, who was in Lafayette recently to deliver a presentation in connection with The Independent Weekly’s speaker series, sees the desire for a more traditional, walkable community with a mix of commercial and residential spaces gaining converts nationally. “People have tended to think that a residential downtown is not something that people want,” he says. “But in fact we’re seeing it in both larger urban areas as well as smaller communities, like Lafayette. There is a market for downtown housing, and I think that the more everyone’s struggling with the price of gasoline, I think you’re going to see more and more of it happening.”

Baron recently teamed up with the Acadiana Outreach Center to discuss possibilities for a mixed-use residential development near its downtown office. Acadiana Outreach is in the process of acquiring property for that project, which remains in the early design phase.

“I think Lafayette is an excellent place for some downtown housing,” Baron says. “The city has been encouraging that and is clearly on the right track. I’m quite encouraged by the possibilities there.”

Baron isn’t surprised that several proposals for downtown residential developments and redevelopment of existing properties have emerged over the past several years but have yet to materialize. He suspects that once one development succeeds, several others will quickly follow. “It’s going to take some initial pioneering,” he says. “But I think once that occurs, things will really start to move along.”

Webre also feels downtown is poised for a development boon. Another component she is waiting on is the next phase of Streetscape, the project that helped spark the start of downtown’s revitalization more than a decade ago by refurbishing Jefferson Street and adding wide brick sidewalks. The next phase of Streetscape, a $2 million project that could start as early as next year, is in the city’s five-year budget for capital improvement projects. That will pay for extension of the project from the corner of Jefferson and Lee streets to Johnston Street. The last phase, slated for funding in the 2010-11 fiscal year, would extend the project to Main Street between Jefferson and St. John streets.

“It’s the synergistic effect,” Webre says of all the projects on the drawing board. “There are a number of different things that are in different stages of planning and concept. And we thought some things would go forward that went on hold, but now they’re picking back up. All of these things together will each strengthen one another.”