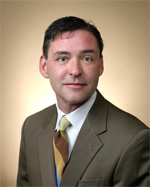 "Hillary Clinton has what it takes to turn around our economy and rebuild the middle class," Whittington said. "There is no question that she is the strongest Democrat to go toe-to-toe with John McCain in a general election. It is our responsibility as automatic delegates to choose the candidate we believe best fit to beat Senator McCain. That candidate is Senator Clinton."

Today, the Democratic primary season wraps up with primaries in Montana and South Dakota. CNN asks the question "After six months, can Democratic race be over?"

Barack Obama is just 42 delegates shy of the 2,118 now needed to clinch the nomination. There are not enough pledged delegates at stake in Montana and South Dakota to put Obama over the top, but a rush of endorsements by the remaining undeclared "superdelegates" could allow him to claim victory when he takes the stage in Minnesota Tuesday evening.   (image of Whittington from the Louisiana Democratic Party's website)