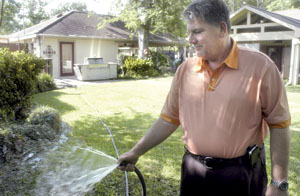 “Some people are going to scream, ‘You’re increasing our taxes.’ The actual taxing rate, the millage, is approved by the voter. That’s how taxes are supposed to be. The ugly loophole in this is the roll back, roll forward deal.” — City-Parish Councilman Keith Patin

For the past four years, Keith Patin’s 3-bedroom, 40-year-old home on Alonda Drive near Brentwood Boulevard has had an official assessed value of around $205,000. He’s been paying approximately $1,475 a year in property taxes on the home. This year, Patin has been told, his home value is shooting up to $277,000, and his property taxes could rise by as much as $737, a 50 percent increase.

“I was surprised,” says the first-term councilman. “Nobody likes their taxes going up. On one end I’m lucky that I’m in an area that has a lot of activity and increased value, and then you get the sticker shock.”

While initially caught off guard, Patin believes the assessment is fair. “Is it too much?” he asks. “Well, if my property’s worth more, then I think it’s accurate.”

Patin’s situation won’t be uncommon, as Lafayette Parish Tax Assessor Conrad Comeaux’s office is now finalizing work on the state mandated four-year re-assessment of property values. Prices are up significantly throughout the parish due to the robust real estate market the area has experienced over the past several years.

The previous assessments represented home values as of Jan. 1, 2003; by law, the new assessments will reflect property values as of Jan. 1, 2007. During that time, real estate statistics show home values have risen an average of about 35 percent in Lafayette Parish. “Our numbers will be reflective of that,” says Comeaux. He expects to begin sending out notices of the new values in late July.

Many factors have contributed to the recent upswing in home values. “The economy in the last four years, prices of housing has gone up,” he says. “People will want to blame that on Katrina and Rita, when in fact that is only part of the equation. The bigger part of the equation is what’s going on with the cost of the commodities.” Comeaux says the skyrocketing costs of basic home construction supplies like copper and concrete, due to increased global demand, have also had a major role in rising home values.

Some property values will remain the same, while increases will vary from neighborhood to neighborhood. “A lot depends on where people live and what’s been going on in the marketplace around where they live,” Comeaux says. Commercial property values are also up, but not as dramatically —  nonresidential property assessments will see roughly a 20 percent increase on average.

Comeaux’s office has no control over actual tax rates, which are proposed by local government bodies and approved by voters. “That’s the misconception — that my office can affect taxes,” he says. “What we’re interested in are the assessed values — how does that value compare to what’s going on in the market? And that is all. It’s up to those taxing bodies to set the rates.”

How much property taxes will rise this year is a complicated question, as taxes vary according to where residents live. There are a total of 41 millages within the parish, some of which apply exclusively to Lafayette city residents and residents of the other smaller parish municipalities and special taxing districts. Local government bodies, including the sheriff, the school board, and city-parish government also have the option of deciding whether to take advantage of collecting more taxes from increased property values. This mechanism is known as a roll forward of millages.

In re-assessment years, state law mandates that local governing bodies cannot take in any more than the previous year’s collection of property taxes without a vote to roll forward its millages. This puts local officials in the difficult position — particularly in Louisiana’s anti-tax climate — of having to vote for more tax revenue.

“Some people are going to scream, ‘You’re increasing our taxes,’” Patin says. “The actual taxing rate, the millage, is approved by the voter. That’s how taxes are supposed to be. The ugly loophole in this is the roll back, roll forward deal. This is one [re-assessment] where if you roll this forward, the net effect of that is increasing people’s taxes that they’re paying.”

As a councilman, Patin is aware that the collective property tax increases tied to the new assessments could provide a much-needed boost to city-parish revenues. “I see both sides,” Patin says. “I don’t want my taxes going up, but yet I see the desperate need for additional revenue for the city.”

Patin has been trying to talk about the issue wherever he goes, so constituents aren’t surprised when they see the new assessments. When he met with Comeaux about the issue, he had the assessor look up his own house so he could use it as an example. “I’m a visual person,” he notes. “I can understand if you tell me using a house as an example. I’m going to have some neighborhood meetings, and I’m asking people what they think. If I vote to roll forward, yes you’re going to pay more taxes. Is it fair at this point?”

In August, the council will be voting on more than a dozen millage roll-forwards, more than any other government entity. (The school board has four millages, while the sheriff, who already has published his intention of rolling forward millages, controls two. Other millages, which have recently been renewed for this year, will be automatically reset to rates approved by voters.)

“There is a need to update, and there is a need for additional revenue,” Patin says. “We’re providing all these services, and things keep getting more and more expensive. We’re still trying to provide the same amount of services. Where does the extra money come from? This would be one source, and it’s something we’ll have to consider when the time comes.”