A report from the CDC reveals that one in four U.S. girls is infected with a sexually transmitted disease — a disturbing trend that has local physicians concerned. 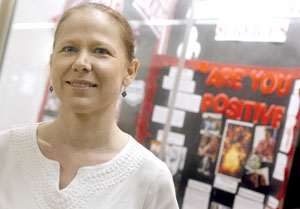 With the Internet, reality TV and explicit talk radio shows, teenagers are constantly being exposed to sex, sex, sex. But, one thing that they are apparently not hearing enough about is the consequences of risky behavior. Sure, they know about pregnant underage actress Jamie Lynn Spears and her 19-year-old “baby daddy,” but there’s a serious void when it comes to information about a potentially life-threatening condition — sexually transmitted diseases.

This ignorance is confirmed by studies from the Centers for Disease Control and Prevention, which show that nearly half of all new STD cases occur in 15 to 24 year olds. In a March 2008 report, the CDC revealed that one in four U.S. girls is infected with an STD. The most commonly transmitted STDs are human papillomavirus, Chlamydia, herpes simplex virus and trichomoniasis.

Locally, physicians say they see a similar trend. Dr. Michael Peebles, an emergency medicine doctor at Lafayette General Medical Center, has seen a rise in STDs among area teenagers, particularly in the 17- to 19-year-old age group. The most common diseases he treats are gonorrhea, Chlamydia and trichomoniasis. From 2006 to 2007, LGMC treated 244 cases of Chlamydia and 112 cases of gonorrhea. For those diseases, 74 percent of Chlamydia patients and 64 percent of gonorrhea patients were in the 16- to 25-year-old age group. The number of patients with Chlamydia increased by 90 from the 2005-2006 period. Peebles notes that the greatest upswing in diagnoses has occurred in young women.

“We tend to see it more in women,” he observes. “We very seldom see STDs in males under the age of 18, but we do see some in 18- to 19-year-old teenagers. But, certainly, in females as young as 16 to 17, we are seeing more of the three STDs overall.”

At UL Lafayette Student Health Services, family medicine specialist Dr. Chris Hayes frequently sees young people concerned about their risks for STDs. In order to combat the trend toward increased STD frequency, the center provides a variety of testing and educational services designed to help students understand this issue. “Women’s wellness exams, including pap smear testing, are also an important part of STD testing, given the fact that pap smear changes [that] can later become cervical cancer are most often due to the HPV, which is acquired sexually,” Hayes says. “Behavior, as in having more than one sexual partner in your lifetime, is how you get the virus,” she explains. “If you have sex with anyone who’s ever had sex before with someone in their lifetime, then you are at risk of getting exposed to one of these viruses.”

Another factor is that women might be getting more pap smears. For females, particularly those with multiple sex partners, regular screening is crucial. “The changes this year could be due to the fact that more girls who are at high risk know that they are at high risk, and so they are getting pap smears,” Hayes notes. “Because, you are not going to find something unless you check for it. What I hope that it means is that the girls who need to get paps are getting them, and we are finding HPV and treating it.”

To reduce the chances of getting an STD, Hayes suggests the obvious: limiting your number of sexual partners. “The bottom line with STDs is that you can’t get one unless you have sex with someone who has an STD,” she says. “So, the way you prevent yourself from getting an STD is that one, you minimize the number of sexual partners you have in your lifetime. And two, you know your partner as well as you know yourself. So, that means you are in a long-term, established relationship with someone that you trust.”

Don’t be fooled by thinking that condoms will protect you against all STDs. “Condoms help, but they don’t protect against all STDs, because they just cover a small portion of the anatomy and the rest of the skin is unprotected,” Hayes explains. “And most of these STDs, especially HPV and herpes, are spread by skin-to-skin contact. They do not require penetrative intercourse; they do not even require what someone would traditionally think of as having sex. And that’s why condoms don’t work.”

In fact, it is possible to catch an STD without intercourse. Both gonorrhea and syphilis are transmissible through oral sex. “A lot of people don’t realize that you can get gonorrhea in the throat, which, if it spreads, can be just as life-threatening as a genital infection,” Hayes says. “Syphilis is very easily transmissible orally and by skin-to-skin contact if the person that you are having contact with has an open sore of primary syphilis. And, most people don’t use condoms for oral sex.”

One of the keys to preventing STDs is early education. “Educating these young females really starts with their guardians and parents, who are really the ones that need to be discussing sex with their children and making them sure that they understand there are risks involved,” Peebles says. “Short of abstinence, there is no perfect way to not get pregnant nor get an STD. But once again, it’s about education, whether it’s on the part of the parents or in the schools.”

The Women’s Foundation Inc. offers a series of puberty classes at its facility, located at 4630 Ambassador Caffery Pkwy., Building A, on the Women’s and Children’s Hospital campus. The classes are separate for males and females. Body Talk, which explains the basics of puberty, is for girls and boys ages 10 to 12. For ages 12-14, the foundation offers Beyond Body Talk, a more detailed class about sexual anatomy, reproductive systems, human sexuality, and discussions on making good decisions. The advanced class, Sex: Truth and Consequences, is held for teens ages 14 to 18 and covers sexual anatomy and physiology, reproduction and responsibility, abstinence and birth control, consequences of teen pregnancy and STDs.

In one of the classes, a teenage boy commented on his evaluation, “This was a very good class. Most of the things were new to me. The types of diseases and the way they look are very new to me. It really encouraged me to think in different ways.”

Another high school student wrote, “You really need to show this to a younger audience.”