A new film explores the dark brown depths of our daily lunch tradition. 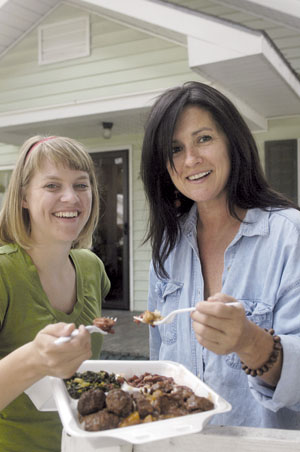 If you ask filmmakers Conni Castille and Allison Bohl why they chose to follow their award-winning documentary about ironing with a film about rice and gravy, they’ll give you a lot of answers. They didn’t make a film about women hunters in the Atchafalaya Basin because they didn’t want to be labeled gimmicky filmmakers who document “women who do things funny.” They haven’t tackled cockfighting because it’s tough to get inside cockpits. They were taxed trying to plan a film about taxidermy.

The truth is that they just wanted an excuse to eat a lot of down home black pot cooking. “We’re such a food-oriented, food-conscious society,” says Folklorist Castille, “that we wanted to record the social aspects of how we eat.” Castille and cinematographer Bohl spent months doing field work “getting on the inside” of brown gravy at local plate lunch houses.

“People used to come home to eat lunch with their families,” says Castille, a Breaux Bridge native. “For farmers and laborers, it was an important daily ritual. That’s not possible today, so neighborhood plate lunch houses have become a substitute for that in south Louisiana culture.” Bohl, a Shreveport transplant, has spent the last 6 years in Lafayette, and her fresh enthusiasm and appreciation of the kind of cooking ubiquitous in Cajun and Creole kitchens shines through her camera work. With so many journalists and filmmakers considering Louisiana one of the last American cultural frontiers, watching a home grown documentary about one of the best loved aspects of our culture through the eyes of artists who know what they are recording — right down to the bone — is pure pleasure. And if you weren’t hungry before you saw the film, watch out — you’re going to need a smothered pork chop fix by the time it’s over.

Raised on Rice and Gravy_, the second documentary from UL’s Cinematic Arts Workshop, will debut at the Bayou Bijou Theatre in the UL Lafayette Student Union, 600 McKinley St., on Sat. June 7, at 3 p.m. A rice and gravy reception will follow. Admission is free. For more information call 277-5292._