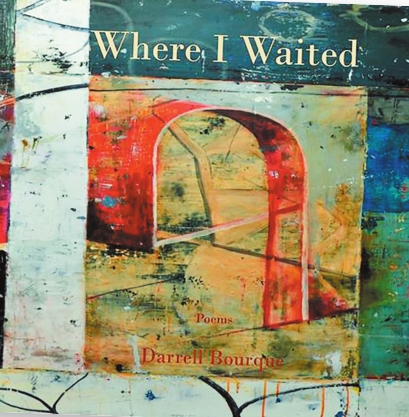 In Where I Waited, the latest collection of poems by Darrell Bourque, the former poet laureate of Louisiana continues his reflections on Creole and Cajun culture, viewing it through the lens of its music and four of its musicians and two women connected to them. Although the poems begin with what is local, they ultimately move to the universal, asking questions that reach beyond Acadiana, questions about beginnings and endings, presence and absence, race and identity. Through his depictions of the ordinary, Bourque reaches for the extraordinary.

Bourque has chosen to play a difficult game. First of all he is writing ekphrastic poems, that is, poems based on a work of art. In the case of Where I Waited he takes as his springboard the paintings of Bill Gingles. Each poem is placed facing an elegantly reproduced image of the painting on which it is based. There is no attempt to replicate or describe the image in words. The challenge is to speak of what it suggests. Quickly tying the two together is Bourque’s practice of ending the first line of each poem with the title of its paired painting. Take, for example, Gingles’ canvas “When Wishing Worked.” The first line of its partner poem reads, “I can barely remember even one time when wishing worked.”

The challenge is intensified by Bourque’s choice of the sonnet form as his basic structure, that 14-line lyric with a predetermined rhyme scheme. He works a variation on the traditional form, however, by grouping the lines into quatrains and three-line stanzas. By running the last line of a stanza into the first line of the succeeding one without pause, he manages to avoid the choppiness that the series of short groupings might have created, and sustains passages that sometimes sound like elegant spoken prose.

Another practice that makes the collection unusual is that the poet speaks through four musicians and two women related to them whose lives reach back to the 19th century. They come to us from their past life and some of them from their post-life states as they muse about their experiences and their worlds. Principal among them is Amédé Ardoin, an almost forgotten figure Bourque has brought once again to public notice. Ardoin, whose recordings of Cajun and Creole songs significantly influenced the musicians who came later, died in 1942 in a racial assault in central Louisiana. He was buried in an unmarked grave. Eighty-three year old Gold- man Thibodeaux claims to be the last living person to have heard Ardoin perform live. He remembers his 8-year-old self waiting under a china ball tree to see the musician come up the road on horseback on his way to play for a Sunday afternoon house party, his accordion hanging beside him in a flour sack. Thibodeaux, one of the few performers of La-La music today, and his wife, Theresa Leday Thibodeaux, manager of the Lawtell Playboys, hold a place of special significance as they are today’s guardians of the musical form.

Other musicians who “speak” in Where I Waited include Cléoma Breaux Falcon, who, with her husband Joe Falcon, was the first to record Cajun music commercially. Iry LeJeune, who also makes several appearances, was a self-taught accordionist who learned his music from listening to recordings of Amédé Ardoin. He is remembered today as a blind musician who reintroduced the accordion to Cajun music. Several small references are made to the 19th century musician Marie Ophelia Thibodeaux. Other voices in other poems in Where I Waited carry the reader from a recognizable world with edges hard and clear to an inner world of forces and urges that seem connected to universal questions and answers.

For readers who are unfamiliar with some of the terms, cultural allusions, and even the speakers in the poems, Bourque has provided explanatory material as an appendix. It ensures that Where I Waited should have an audience well beyond Acadiana.

There is much for any reader to ponder in Bourque’s latest work. And much to enjoy.

Ann B. Dobie is professor emerita of English at UL Lafayette.